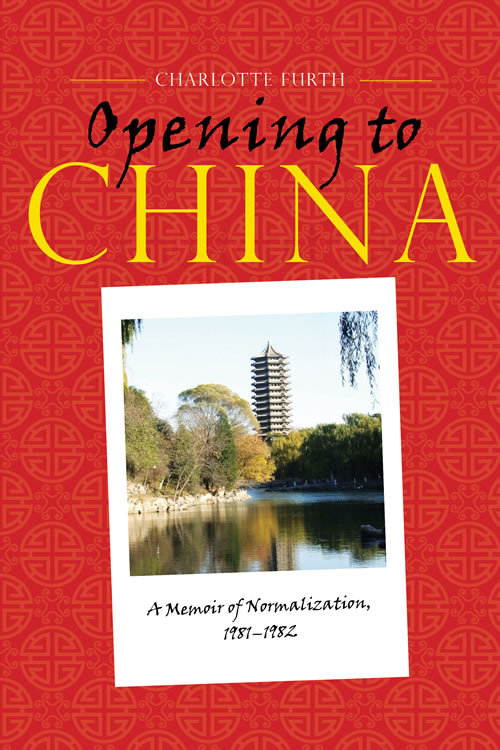 Opening to China: A Memoir of Normalization, 1981–1982 by Charlotte Furth

"Written in an engaging and candid style, this book is a pleasure to read and opens a fascinating window on an intriguing but little studied moment in recent Chinese history.” —Jeffrey Wasserstrom, editor of The Oxford Illustrated History of Modern China

In 1981 an American historian of China, Professor Charlotte Furth, travelled to Beijing to teach young Chinese scholars about America. Professor Furth's year-long adventures, captured in this lively memoir, tell of classroom encounters, bureaucratic entanglements, expat frustrations, unlikely friendships, and misunderstandings both comic and grave. Her sponsor, the Fulbright program of academic exchange, had just revived after thirty years of the Cold War, and carried with it American hopes for a new era of cooperation between China and the United States. Her students were shaped by the Communist revolution, schooled in its political disciplines, and torn between thirst to experience the outside world at last and anxiety about what lay ahead in a post-Mao future.

Based on Professor Furth's detailed notes and letters home at the time, this book evokes the unique atmosphere of expectation and frustration that characterized the first years of normalization. Furth belongs to a generation of American China experts who hoped for alternatives to the reductive cold war policies that made communism not only an enemy abroad but a weapon against social democracy at home. She encountered young Chinese intellectuals who also wanted to imagine a more just society at home without abandoning their primary loyalties to culture and nation. Their search for common ground can help us understand the impact of the Mao era on society and the path Chinese elites have followed since the 1980s. It also can tell us about ourselves as Americans forced to defend our own society against friendly yet penetrating scrutiny.

This book is a valuable account for specialists on Sino-American relations and on the formative years of the generation of Chinese who lead the People's Republic of China today. It is also a fascinating read for anyone who wants to explore the pleasures and perils of Chinese and American struggles to understand one another.

Watch Professor Charlotte Furth's speech about her book at the AAS Cambria Press reception (or read the transcript of her speech).

Read the book excerpt in the #AsiaNow article by the Association of Asian Studies (AAS).

"For those who saw China at this time, this book is a touching reminder of the tentativeness of the whole affair – how Americans and Chinese alike were desperate to meet and get to know each other – and how difficult that was in reality – as cultural gaps and political realities loomed in the background of every encounter. Opening to China tells us also about the life of one of our most important China scholars, and through that life we see the growth and maturation of the field of modern Chinese history in the twentieth century. ... this book about her time there informs us about the fraught nature of public diplomacy. ...those interested in this key period of relations between the United States and China will find in this book a detailed and evocative picture of the personal side of public diplomacy. At the same time, it is a jolly good read." —China Review International

“Charlotte Furth's memoir provides a window into a China that few of us can remember or even believe possible: a country that was not the economic and political powerhouse of today, but a hesitant, slightly paranoid society emerging from decades of being closed-off to the outside world. As one of the rare witnesses to this crucial transition, Professor Furth takes us into the life of China's most important university, showing the struggle to accept her group of visiting scholars--a microcosm for the debate in China at the time over whether the country really should open up. Written honestly and candidly, this memoir will be of interest to scholars of US-China engagement but also to general readers eager to see how much China has changed over the past decades.” —Ian Johnson, Beijing correspondent for The New York Times, and author of The Souls of China: The Return of Religion After Mao

“Charlotte Furth, a distinguished scholar of China’s past, turns her gaze now on a special moment in her own. The resulting memoir is alternately amusing and moving. Writing in an engaging and candid style, this book is a pleasure to read and opens a fascinating window on an intriguing but little studied moment in recent Chinese history.” —Jeffrey Wasserstrom, editor of The Oxford Illustrated History of Modern China

“The scale and reach of China’s transformation since the death of Mao challenges historical perspective. Few Americans today have any sense of how far China has come since its opening in the early 1980s. Charlotte Furth was there to see the start of the defrost with the country’s opening and her lively account of her experiences in China then provides a unique and invaluable record. Hers is a touching, gentle, humorous, and thoughtful story. It is also useful in these days of rising tensions between China and the United States to be reminded of China’s social reality not very long ago.” —Gordon H. Chang, Olive H. Palmer Professor in Humanities, Stanford University and author of Fateful Ties: A History of America’s Preoccupation with China

“Written in a sober, yet intimate, tone, Charlotte Furth’s memoir of her time teaching in China during the very early years of the reform era brings to life the tensions, contradictions, and promises of that period. A famed historian writing about her personal experience, Furth gives us a vivid portrayal of a China ‘on the verge,’ and of the emotions, fears, and hopes it elicited in those who saw it up close. This book is a gem for specialists and curious onlookers alike.” —Fabio Lanza, Department of History, University of Arizona

“As a trained China historian and astute observer, Charlotte Furth has provided us with a nuanced and well-crafted narrative of her life as a foreign teacher at a major Chinese university emerging from the trauma of the Cultural Revolution. As one of the first Fulbright teachers in China after 1949, she was sailing in uncharted waters, but managed to impart a better understanding of the United States for her students, while gaining their trust. She has perfectly captured the ambiance and environment of Beijing in the early 1980’s: poverty, the winter stockpiles of cabbage, the hordes of cyclists, dust storms, lack of personal choice, bureaucratic restrictions, and ‘spiritual pollution.’ From the encounters she describes, the reader will appreciate the continuing importance of social relationships while working and living in China, especially in successfully coping with the madding ambiguity of Chinese bureaucracy and opaque social norms.” —John Thomson, first Counselor for Press and Cultural Affairs, American Embassy in Beijing (1979–1981)

“In this engaging memoir of the early days of China’s opening to the outside world, Charlotte Furth captures the strangeness of a time when few foreigners lived in Beijing and no Chinese could be sure which way was forward—or whether that way could include knowing people like her. As she recalls the affection and puzzlement she felt responding to their hopes and fears, she is able to show us the contradictions and disappointments with which that generation, stranded between Maoism and modernity, had to cope. China’s opening may not have been easy for the foreigners who went to live there, but as one of her students told her, ‘It is difficult to be a foreigner here, but not as difficult as to be a Chinese.’ Furth fills this gap with a thoughtful compassion that we would do well to nurture still.” —Timothy Brook, author of Vermeer’s Hat and Mr. Selden’s Map of China

Charlotte Furth is Professor Emerita of Chinese History at the University of Southern California. Before moving to USC in 1989, she spent two decades on the faculty of California State University at Long Beach. The book based on her Stanford PhD dissertation, Ting Wen-chiang: Science and China’s New Culture, was published by Harvard East Asian Monograph Series in 1970. A Flourishing Yin: Gender in China’s Medical History (University of California Press, 1999) was awarded the “Women in Science” prize by the History of Science Society in 2001. For her scholarship and service to the profession, including work as journal editor and on several important edited volumes, she was honored for “Distinguished Contributions to Asian Studies” by the Association for Asian Studies in 2012.

Watch Professor Charlotte Furth's speech about her book at the AAS Cambria Press reception (or read the transcript of her speech).

Chapter 1. Becoming a Historian of China in Cold War America

Praise for the Book