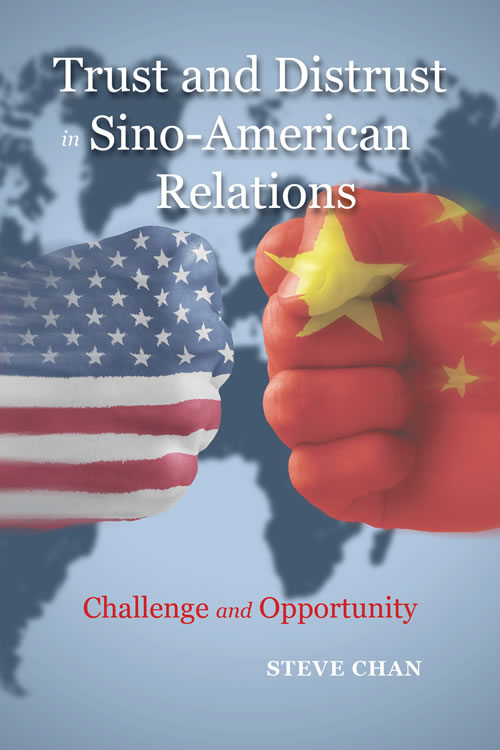 Trust and Distrust in Sino-American Relations: Challenge and Opportunity by Steve Chan

"There is something in this excellent book for every type of student and scholar here to take away. For Sinologists and students of Sino-American relations, it provides them with the big picture and an explanation of China’s place in it. For international relations students, it gives us an additional variable—an instrumental variable—as such to help us enhance and enrich extant theories of major power relations." —Journal of Asian Security and International Affairs

Trust is a concept that ought to be at the front and center of international relations research. It is pivotal to how states interpret the actions of others and decide their own policies. Mutual distrust can set off a spiral of competitive dynamics as a consequence of reciprocal misinterpretation of each other’s intentions. At the same time, misplacing one’s confidence in a state that is actually untrustworthy can seriously jeopardize a country’s security. Yet despite its analytic and policy importance, only a few books have given systematic attention to this pivotal concept.

Trust and Distrust in Sino-American Relations: Challenge and Opportunity fills that gap by addressing the question of how states acquire a reputation for trustworthiness—or untrustworthiness—in the eyes of others. It focuses especially on the relationship between China and the U.S., the two most consequential countries in today’s world, offering a systematic framework for analyzing their level of trust, and examining how ongoing trends and prospective developments may foster or undermine this relationship. In this, it provides a new approach to the subject by applying theoretical insights and empirical generalizations from the international relations literature to the case of Sino-American relations.

Based on this analysis, Steve Chan argues that mutual strategic restraint holds the key to building trust in Sino-American relations—a demanding requirement in that it exhorts both sides to accept limits on their use of military force, to observe treaty obligations and international conventions, and to respect each other’s traditional sphere of influence. It also commits leaders on both sides to easing rather complicating the political challenges facing their counterparts as they seek to reconcile their domestic and foreign needs and desires. Chan posits though that it will probably take a major development to precipitate this “new thinking” in both countries.

The book will be of use to international relations scholars and students, China specialists, legislators, policy analysts, and practitioners in various branches of government.

A hardcover version of Trust and Distrust in Sino-American Relations is available.

"Well organized ... a book well worth reading ... the most important contribution of this book is the introduction of the concept of ‘trust’ into the international relations theory literature. Chan’s contribution to the literature is taking a step further from the descriptive studies that characterizes the works of many scholars of US–China relations and Sinologists. Rather than stick to the idiographic level of analysis, as Sinologists or Americanists would do in their studies, Chan raises the analysis to the nomothetic level where the concept and indicators can be employed for studies beyond the contemporary US–China relations to relations between other powers in the future. Yet, there is something in this excellent book for every type of student and scholar here to take away. For Sinologists and students of Sino-American relations, it provides them with the big picture and an explanation of China’s place in it. For international relations students, it gives us an additional variable—an instrumental variable—as such to help us enhance and enrich extant theories of major power relations." —Journal of Asian Security and International Affairs

“Steve Chan, a leading scholar of Chinese foreign policy, has once again come up with an excellent book, this time on the topic of ‘trust.’ In this succinctly written book, he provides a very rich theoretical and empirical discussion of trust and mistrust in international relations with the use of Sino-US relations as empirical case study. A valuable addition to both IR theory and the study of China’s foreign relations.” —T.V. Paul, James McGill Professor of International Relations, McGill University

"Trust and Distrust in Sino-American Relations does an excellent job of examining key levels of trust in China-US relations. Steve Chan’s theoretically informed analysis is a great contribution to the literature of international relations studies and the study of China-US relations." —Richard Hu, Head of Department and Professor, Department of Politics and Public Administration, University of Hong Kong

“In Trust and Distrust in Sino-American Relations, Steve Chan covers a wide range of material in an accessible and sophisticated manner to identify important possibilities for building trust in Sino-American relations. The book makes an important contribution by exploring especially both the domestic and international challenges of legitimating a policy of strategic restraint in the US-China context." —Nicholas J. Wheeler, Professor of International Relations and Director of the The Institute for Conflict, Cooperation and Security, University of Birmingham

“With the future of international relations so dependent on how the U.S. relationship with China evolves, Steve Chan’s theoretically informed and systematic analysis of different sources of trust and mistrust in Sino-American relations is required reading for international relations theorists, policy analysts, and concerned citizens.” —Jack S. Levy, Board of Governors' Professor, Rutgers University

Chapter 4. A Semi-Strong Form of Trust Motivated by Reputational Considerations

Chapter 5. A Strong Form of Trust Grounded in Appropriateness and Unthinkability