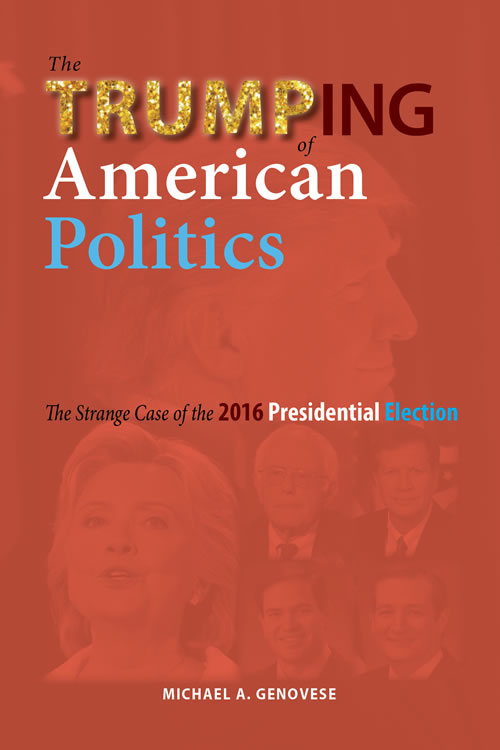 The Trumping of American Politics: The Strange Case of the 2016 Presidential Election by Michael A. Genovese

"Anyone who wants to understand the unique and often bizarre 2016 presidential election needs to read this book by Michael A. Genovese. This timely, well-researched, hard-hitting, and comprehensive account of the 2016 primaries and general election should be read by scholars, students, and the general public." —James Thurber, American University

What happened during the 2016 US presidential election? This is a question that many still continue to ask all around the world as some still continue to reel from the whirlwind of events that led up to Donald Trump becoming the 45th president of the United States.

In this well-written, highly accessible book, renowned political scientist and presidential studies scholar Michael A. Genovese expertly guides readers through the 2016 election, navigating the unexpected twists and turns—from outsiders Bernie Sanders and Donald Trump rising up in the Democratic and Republican parties repectively to the final race between Hillary Rodham Clinton and Donald Trump— that ultimately led up to the "trumping of American politics."

"Anyone who wants to understand the unique and often bizarre 2016 presidential election needs to read this book by Michael A. Genovese. This timely, well-researched, hard-hitting, and comprehensive account of the 2016 primaries and general election should be read by scholars, students, and the general public." —James Thurber, American University

“One of the nation’s most astute and prolific scholars of the presidency walks the reader through the tumultuous and unprecedented 2016 elections with wit, skill, and clarity, elucidating key moments, but also the larger lessons and principles that frame his analysis. An accessible and insightful book.” —Robert Spitzer, SUNY Cortland

"What happened in 2016? How could Clinton lose and Trump triumph? Ingenious political scientist Michael A. Genovese explains that enough working class whites were captivated by Trump's television celebrity status and by his attitude: anti-politics, anti-Washington, anti-incumbent, etc… Still,it is a complicated and puzzling story . Genovese makes sense of it and proposes provocative reforms in this tight, highly readable treatise." —Thomas E. Cronin, Colorado College

“In this book, Michael Genovese carefully walks us through the details of the 2016 election and its immediate aftermath. This is a valuable, indeed essential undertaking. Genovese’s book performs the indispensable task of specifically documenting why Trump challenges and threatens democratic norms. This is not a partisan rant, but a clear-eyed assessment that describes what went wrong in 2016, why the U.S. presidential election process in general is deeply flawed and how it can be fixed.” —Chris Edelson, American University

“Michael Genovese’s book, The Trumping of American Politics, is an engaging, entertaining, comprehensive examination of one of the most controversial presidential elections in U.S. history. Once readers start on the book, they will surely want to finish it.” —Matthew Streb, Northern Illinois University