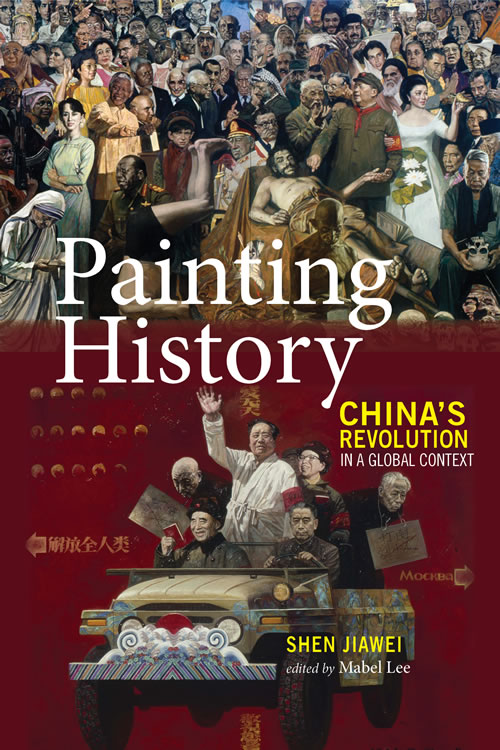 "Never content to simply record history Shen Jiawei has taken a rigorously critical, analytical approach to the great movements and great figures that have shaped our world. This is true of his writing no less than his painting, and he has given us the rarest of books: a masterful history lesson by a master artist." —John McDonald, The Sydney Morning Herald

The celebrity artist Shen Jiawei’s history paintings are held at the National Museum, Art Museum, and Military Museum in Beijing, as well in public or private collections in the Vatican, Australia, China, the United States, New Zealand, Malaysia, Hong Kong, and the European Union. In addition to being famous for his history paintings, Shen is a leading portraitist who has painted the official portraits of dignitaries such as Pope Francis, Princess Mary of Denmark and Australian Governor-General Sir Peter Cosgrove.

Born in 1948, Shen, like those of his generation growing up under the red flag of communism, was a passionate communist. He had just graduated from high school when Mao Zedong launched the Cultural Revolution (1966–1976), and announced the closure of all schools and universities in China. Even though this meant that his dream of becoming an artist was now impossible, Shen remained intensely loyal to Chairman Mao.

High school students were dispatched to live amongst the peasants for a proper education, but there was the option of going to remote borderlands far from home, and for this one could earn a basic salary. In 1970 Shen volunteered to work in Heilongjiang Province, close to the border with Russia, and there he was assigned to the Heilongjiang Production and Construction Corps that was operated by the People’s Liberation Army (PLA). At precisely that time, to inspire the population, artists were needed to paint heroic workers, peasants, and soldiers for propaganda posters. Shen was recruited to train at the art school of his work unit. His painting Standing Guard for Our Great Motherland was hung in the most prominent position at the 1974 National Art Exhibition held at the National Art Museum of China, Beijing. Shen was shocked to see that his painting had been changed to suit the specific requirements of Madam Mao (Jiang Qing). She had praised the painting, and it was collected by the National Museum and printed in newspapers, magazines, and journals. More than 200,000 posters of Shen’s painting were also printed.

However, after Jiang Qing fell from power, in 1981 the painting was rolled up and returned to Shen’s work unit. Shen’s father was imprisoned in his workplace jail for a year because someone said he used to hang a poster of his son’s painting next to his desk. Shen picked up his painting and then left it under his bed, where it stayed until the Guggenheim Museum in New York requested the loan of the painting for its 1998 exhibition, “China: 5000 Years.”

Shen had relocated to Australia in early 1989, so he arranged for the painting to be brought to Sydney where he restored it with the help of experts at the Art Gallery of New South Wales. In 2009 the painting sold in Beijing for US $1million at China Guardian Auctions, and since 2012 it has been on permanent display at the Long Museum in Shanghai.

While a significant number of excellent artists have emerged in China with backgrounds like Shen Jiawei’s, very few have written significant studies about their experiences that can serve to expand the basis of our knowledge of those times, and about how and why art flourished in China in those times.

A bibliophile, Shen is an avid, meticulous reader and thinker. Importantly, he is dedicated to the genre of history painting, even though this genre has virtually died in the West with the advent of photography. He believes that the history painter can expand the psychological space of a canvas through innovative strategies. He has substantiated these innovative strategies in his paintings, and, more importantly, in his book Painting History has written in detail about these strategies.

Shen argues that there are humanist communists such as Norman Bethune and Fred Hollows in later times. This book focuses on a range of colorful intellectuals who embraced communism against fascism in the 1920s and 1930s, and visited China during the Japanese invasion as well as fighting in the Spanish Civil War. How many of us know that a Chinese contingent had travelled to Spain to fight for the Republican cause? Shen probes issues in the international communist movement that swept the world in those times and ponders global problems that confront the modern world.

Shen is a meticulous notetaker and diarist, and the book draws on these rich archival materials, as well as what can be described as his photographic memory.

Many significant insights are revealed in this book because of Shen’s erudition in important twentieth- and twenty-first-century Chinese and Western writings. Details about ordinary Chinese people are perceptively discussed with a ring of authenticity that seldom appears in other writings. These details are drawn out for us due to Shen’s artist’s keen sensitivity.

Painting History will appeal to readers with an interest in gaining a fresh understanding of modern China, especially in its art history, society, and politics; its people and what intellectual problems preoccupied them; and what happens when Chinese artists relocate to Western societies, such as Australia. This book will also be of great interest to those with an interest in the genre of history painting and those who seek to learn more about the artistic innovations introduced by Shen.

Watch the video of the book launch of Painting History:China’s Revolution in a Global Context at Gleebooks in Sydney, Australia.

"Shen Jiawei may be best known for having created one of the most iconic art works from the Cultural Revolution, but his body of history paintings spanning the last forty years explained in this book are much more than that. Bearing the impact of his experiences in Australia where he migrated to in 1989, Shen's paintings address broader global issues and are, if anything, portraits of our time. These are the visual recordings of the world from his own perspective. At a moment when many can see China's geopolitical rise in importance, this book offers us a way to see the world from a different cultural vantage point." —Melissa Chiu, Director, Hirshhorn Museum and Sculpture Garden, Washington D.C.

"Shen Jiawei is one of the few artists today willing to call himself a history painter, having spent five decades engaging closely with Chinese and global events. In China Shen stretched the boundaries of what he was permitted to paint. In Australia the only limits were those of his own imagination. Never content to simply record history he has taken a rigorously critical, analytical approach to the great movements and great figures that have shaped our world. This is true of his writing no less than his painting, and he has given us the rarest of books: a masterful history lesson by a master artist." —John McDonald, Art Critic, The Sydney Morning Herald

"This book chronicles Shen Jiawei’s extraordinary journey from youthful propaganda artist in the 1970s, to official painter of historical scenes, wry observer of China and the world, and now portraitist and Australian national treasure, with examples of works from the various phases of his career. The essays accompanying the paintings demonstrate his understanding of his subjects' lives and his scholarly attitude in his art." —Richard King, University of Victoria

Shen Jiawei, celebrity artist in China from the mid-1970s, relocated to Australia in 1989. Becoming a leading portraitist, he painted official portraits of dignitaries such as Pope Francis, Princess Mary of Denmark and Australian Governor-General Sir Peter Cosgrove. Seventeen of his history paintings are held in Beijing at the National Museum, Art Museum and Military Museum; other history paintings are held in public or private collections in Australia, China, USA, Vatican, New Zealand, Malaysia, Hong Kong and the European Union.

Chapter 1: The Fate of a Painting

Chapter 7. The Opening of the Fifth Seal: After El Greco

Chapter 16. Wise Men from the East