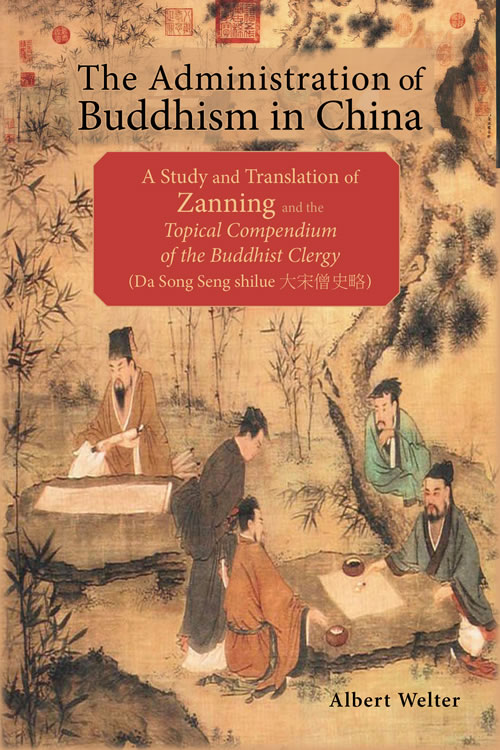 The Administration of Buddhism in China: A Study and Translation of Zanning and the Topical Compendium of the Buddhist Clergy (Da Song Seng shilue) by Albert Welter

"Albert Welter’s magisterial study and translation of Zanning’s Da Song Seng shilüe is a scholarly tour de force. It confirms his reputation as the premier exegete of his generation on the Song-dynasty Buddhist tradition." —Robert Buswell, Irving and Jean Stone Endowed Chair in Humanities, Distinguished Professor of Buddhist Studies, and Director of the Center for Buddhist Studies, UCLA

The early Song dynasty (960–1278) was a time of immense intellectual fervor, as China rulers, after over a century of internecine warfare, embarked on a new course that promoted wen (literary or cultural arts) over wu (martial prowess). With the new literary based agenda came a discussion of how to constitute Song’s wen agenda, how to define wen values, what kinds of literature should be included and what excluded, and so on. Zanning (919–1001) was the leading Buddhist literatus at the Song court and his Topical Compendium of the Buddhist Clergy represents a major contribution to this debate, the understanding of which would be deficient without it. The new Song consensus which he helped forge became foundational for the future of China and formed the model for culture and civilization throughout East Asia.

The Topical Compendium of the Buddhist Clergy is a primary source of our knowledge of Chinese Buddhist institutional history. It details practices and policies regarding the administration of Buddhism that are otherwise difficult to access, and is the major work of its kind in the Chinese context. It establishes principles for the administration of Buddhism in China, many of which were customarily followed. Zanning’s work was compiled at the request of emperor Taizong (r. 976–997) for the purpose of educating the emperor and scholar-bureaucrats on matters pertaining to Buddhism, and thus serves the primary purpose of a guide book or primer on things Buddhist that Song administrators may need to know.

The relationship between religion and the state is a topic of major concern in the history of religions. While books, articles, and essays on this topic are common for other regions of the world, especially the West and increasingly for Islamic regions, there are few works discussing the dynamics of religion/state relations in China. Studies are beginning to appear that discuss the dynamics of religion/state relations in modern China, and while many studies of pre-modern Chinese religion touch on this topic, there is no study in English that addresses this topic head on. The relationship between religion and the state in China is a perennial problem that shows no sign of losing its significance in contemporary international affairs, and studies of the history of this relationship with a focus on Buddhism, the most articulate religious force in China during the past couple of millennia, cannot but have a real value to scholars and students.

Zanning’s Topical Compendium of the Buddhist Clergy engages the issue of the Buddhist presence in China directly, arguing for the clear and consistent contributions of Buddhism to Chinese culture and society in an unambiguous way. While ceding claims to independence, Zanning offers that Buddhism is an integral component of China’s culture, not an alien tradition anathema to Chinese values, but an important contributing factor to them. While other works argue in favor of Buddhism in the Chinese context in doctrinal and intellectual terms, only the Topical Compendium of the Buddhist Clergy asserts the necessity of Buddhist institutions and customs as assets in administrative affairs.

The Administration of Buddhism in China: A Study and Translation of Zanning and the Topical Compendium of the Buddhist Clergy is an important book for Asian studies, Buddhist studies, and history collections.

"Albert Welter’s magisterial study and translation of Zanning’s Da Song Seng shilüe is a scholarly tour de force. Professor Welter teases out of this seminal text a plethora of fascinating data on the depth and breadth of the relationship between Buddhist institutions and the state in premodern China. It confirms his reputation as the premier exegete of his generation on the Song-dynasty Buddhist tradition." —Robert Buswell, Irving and Jean Stone Endowed Chair in Humanities, Distinguished Professor of Buddhist Studies, and Director of the Center for Buddhist Studies, UCLA

"Meticulously introduced, translated and annotated by an accomplished historian of Song Dynasty Buddhism, Albert Welter’s English rendering of Zanning’s Topical History of the Buddhist Clergy affords us access to one of the most innovative periods of Chinese Buddhist institutional history, as well as one of the most enduring works of the Chinese Buddhist historiographical imaginaire. This book is an important addition to Buddhist studies; it provides valuable insights on the subjects that Zanning considered crucial to understanding the thousand-year history of the Buddhist monastic Sangha in China." —Daniel B. Stevenson, Professor of Religious Studies, University of Kansas

"With its curious blend of furniture and festivals, titles and forms of address, etiquette and power politics, the Seng shi lüe, translated here for the first time, is an important testament to the incorporation of Buddhism into the Chinese imperial bureaucracy. In addition to serving as a window to Buddhism in China at the dawn of the second millennium, this valuable book, presented here with extensive annotation, holds a unique place in Chinese historiography." —John Kieschnick, The Robert H.N. Ho Family Foundation Professor of Buddhist Studies and Department Chair of Religious Studies, Stanford University

"This work is extremely valuable for understanding Buddhism-State relations in Chinese history, and its translation is a major milestone in Chinese Buddhist studies. The translation is copiously annotated and is preceded by a generally helpful and informative introduction. No similar work has ever been translated into English and the book will be of great value to anyone interested in Buddhism and Chinese history, including students of Chinese State-Buddhism relations, those interested in the history of social control in China, and Song historians in general. Many scholars will want to own a copy of this book, and a large number of universities and colleges will certainly want to buy this for their libraries. It is also likely that the book will be used at least in part in upper-level undergraduate and graduate courses." —Morten Schlütter, Associate Professor of Chinese Religion Department of Religious Studies, and Director, Center for Asian and Pacific Studies, The University of Iowa

Albert Welter is a professor of East Asian Buddhism and intellectual history at the University of Arizona, and an honorary professor at the Hangzhou Academy of Social Sciences. He received his MA and PhD degrees from McMaster University (Ontario, Canada). Dr. Welter’s previous publications include Monks, Rulers, and Literati: The Political Ascendancy of Chan Buddhism, The Linji lu and the Creation of Chan Orthodoxy: The Development of Chan’s Records of Sayings Literature, and Yongming Yanshou’s Conception of Chan in the Zongjing lu: A Special Transmission within the Scripture. He is also coeditor and contributor to Religion, Culture, and the Public Sphere in China and Japan. He is currently working on a research project on Hangzhou Buddhist Culture funded, in part, by the Khyentse Foundation.

Chapter 1. The Life and Times of Zanning: Reflections on the Dual Allegiances of a Faithful Buddhist at the Imperial Court

Chapter 2. The Topical Compendium of the Buddist Clergy

Translation: A Topical Compendium of the Buddhist Clergy in China

Fascicle I: The Propagation of the Buddhist Faith