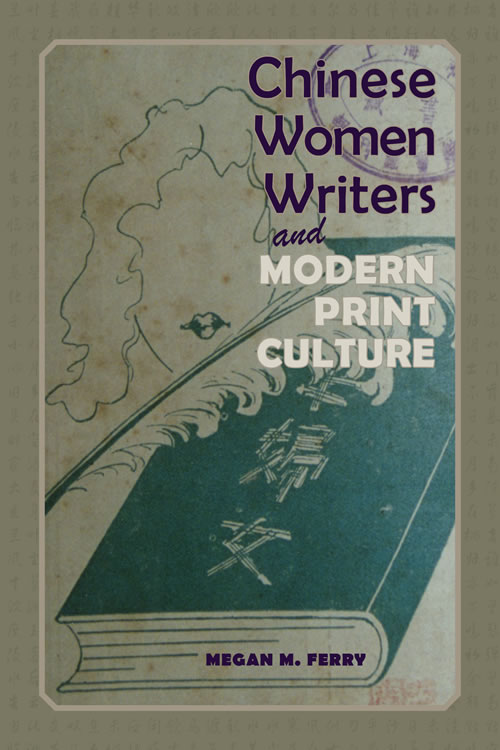 "In Chinese Women Writers and Modern Print Culture, Professor Megan Ferry provides a meticulous analysis of the gendered spaces that modern Chinese publishers, editors, critics, propagandists, and policy makers created for the work of female authors, both before and after the Communist revolution of 1949. This detailed study of the textual and visual mechanisms that bring gender into being makes an important and original contribution to our understanding of print culture, both in China and beyond." —Michel Hockx, Professor of Chinese Literature and Director of the Liu Institute for Asia and Asian Studies, University of Notre Dame

Print media in early twentieth-century China was the primary vehicle that told the collective stories of China’s modernity and women’s emancipation, and it was the central medium for promulgating the new cultural values and beliefs of an emerging republic. Because of its broad reach, print media played an influential role in informing and molding the social beliefs, attitudes, and ideological messages of radical cultural transformation. Yet its power in constructing a gendered ideology of China’s modernity has only begun to attract critical attention.

The widespread public exposure of modern Chinese women writers in the 1920s and 1930s generated interest in women’s creative output. The publishing field was the chief cultural forum within which other women looking for role models assessed their experiences in modernity. At the same time, however, this forum was limited by parameters that defined the labor of “women writers” (nüzuojia) as largely sentimental, unstructured, politically disengaged or naively subjective and unable to see the “larger picture” of humanity. Therefore, the value of women’s creative output was classified alongside the dominant narrative that conditioned readers’ responses to women’s literary output as evidence of women’s incomplete emancipation. The liberation of the newly styled women occurred in an industry whose power was the basis of the nation’s new cultural construction, yet despite there being exemplary women within the industry, there is no evidence of women as drivers of culture or in sustained cultural leadership roles to the same extent or with the same cultural weight as their male peers.

Women intellectual’s status as cultural producers, as it was codified in print media, has yet to be more fully explored so that we can better understand the relationship between gender ideologies and media. By deconstructing the hidden visual and linguistic signs of modernity’s promise for women’s equality and freedom one can begin to understand why, a century later, contemporary female authors confront obstacles similar to their pre-1949 predecessors. The social category of “women writers” is one among many that lets us examine how media’s visual and linguistic signs of difference express cultural identity norms and codify the modern individual.

This is the first study to analyze the gendered ideologies of Chinese print media and political culture in a single work. It employs media analysis to examine the way paratexts create and reproduce gendered norms, especially through persistent material and discursive mechanisms that framed women authors and their textual production. Though a plethora of women’s voices resonated throughout the literary publications, journals, and newspapers, these voices were framed by print media’s apparatus that marked women as belonging to a sphere of difference. This marked difference highlights a contradictory outcome of women’s emancipation and gender equality.

The paratexts and epitexts served as regulating apparati within the industry, establishing normative codes for understanding sex and gender difference in textual and visual forms. These various codes have constituted the dominant narratives that readers absorbed as common sense recognition of female emancipation in the early twentieth century. While in many instances the public recognition of women had positive effects on their self-definition and agency, such media elements also had a governing effect on the place of women’s intellectual labor within Chinese culture. As political subjects of emancipation, women authors were publicly portrayed as individuals on the path to self-realization, and as part of a collective body whose access to public life improved with modern advances in society, such as reformed education, changes in the family structure, and entry into the paid labor force. Viewed from an economic standpoint, these changes would ensure women’s productive participation in China’s modernity. The aggregate media messages and stories, however, qualified ambiguously women’s economic production. By repetitively referencing women as subjects of difference, the messages codified women’s agency and authority within the proemancipation rhetoric of the time, such that we find an almost uniform vision of women’s cultural labor.

Chinese Women Writers and Modern Print Culture is an important book for scholars in the fields of Asian studies, media studies, and women and gender studies.

"A meticulous achievement of nearly twenty-year research ... Ferry has convincingly depicted how print media in twentieth-century China constructed both gender and identity, which, to a certain extent, tempered and regulated a woman writer’s physical body as well as her intellectual authority. ... Ferry goes in depth into a great variety of newspapers and periodicals, including both serious literary publications and tabloids. She also makes good use of numerous visual images to illustrate the contradictory position of women writers as both consumers and commodities. Particularly in the case of Ding Ling’s disappearance and reappearance in public, Ferry exemplifies how renowned left-wing intellectuals almost created a 'reading method' to connect the woman author and her texts by (mis)interpreting her images. Another example of her detailed archival research is that Ferry notices the woman writer Chen Hengzhe started to write vernacular fiction even before Lu Xun, though the latter took all credits for this revolutionary new genre, leading a pioneering fashion in literature style (p. 85). ... The approach of gender that Ferry picks is quite innovative [and her] criticism of the 'women category' is indeed thought-provoking. She carefully compares 'modern girl' and 'new woman,' concepts that are often mixed without sufficient consideration. ... make inspiring discussions and arguments even more meaningful at present. ... Her illustration on gender consciousness and protocols in the print industry since 1980 reminds us of how state-led propaganda attempted to regain control of the discourse on reproductivity in just recent years and make us rethink how women writers address their own physical presence in the male-dominated literary tradition past and present." —China Review International

"In Chinese Women Writers and Modern Print Culture, Professor Megan Ferry provides a meticulous analysis of the gendered spaces that modern Chinese publishers, editors, critics, propagandists, and policy makers created for the work of female authors, both before and after the Communist revolution of 1949. This detailed study of the textual and visual mechanisms that bring gender into being makes an important and original contribution to our understanding of print culture, both in China and beyond." —Michel Hockx, Professor of Chinese Literature and Director of the Liu Institute for Asia and Asian Studies, University of Notre Dame

"Investigating the intricate relationship between the politics of culture, economics, and print media, Megan Ferry discloses the subtle gender ideologies of the paratext, or the way in which the textual and visual environment, of the early and mid-twentieth century in China defined and demeaned the intellectual contributions of women. This illuminating study looks beyond the usual suspects of famous texts and authors, weaving an insightful tapestry that exposes the complex elements inscribing women into social life." —Wendy Larson, Professor Emerita, University of Oregon, and author of Zhang Yimou: Globalization and the Subject of Culture

"This superbly researched and analytically sophisticated book marks an important intervention into studies of women’s subjectivity in twentieth-century China, as well as for literary and media studies more generally. Ferry demonstrates the significance of interrogating the ways in which both historical and contemporary understandings of women’s writings and cultural expression are framed by tropes and structures of gender differentiation in media, literary criticism, and capitalism/consumption. With this insightful, thought-provoking study, Ferry provides us with a much-needed nuanced understanding of the complicated interactions between conceptualizations of women’s empowerment and emancipation with the structural conditions in which empowerment is expressed. After reading this book, many scholars, myself included, will find themselves rethinking the terms on which we accord public recognition to women (as) writers." —Tina Mai Chen, Department Head and Professor of History, University of Manitoba

Megan M. Ferry is Associate Professor of Chinese and Asian Studies and Chair of the Modern Languages and Literatures Department at Union College. She holds a PhD and MA from Washington University–St. Louis in comparative literature and a BA from Mount Holyoke College. Dr. Ferry has published in several journals such as MLQ, Modern Chinese Literature and Culture, Journal of Contemporary China, and Continuum. She is currently a member of the Modern Language Association ADFL Executive Committee.