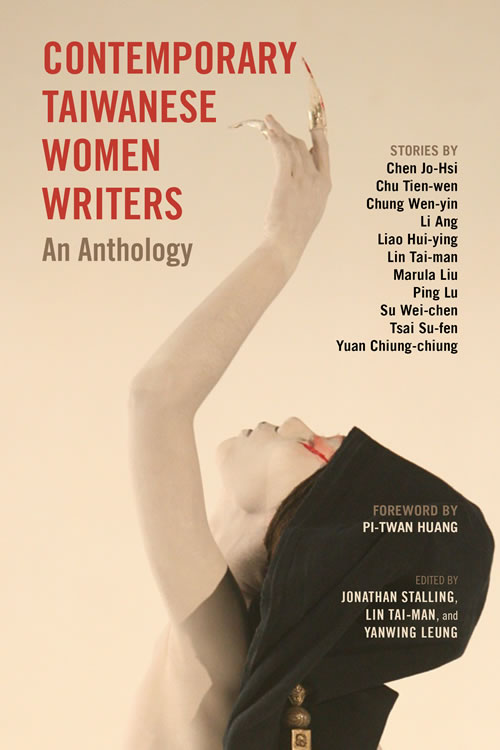 "Contemporary Taiwanese Women Writers: An Anthology showcases the best examples of contemporary Taiwanese writing by women writers, all of whom have won major literary awards in Taiwan and are recognized as leading figures of Taiwan’s literary scene… a rich anthology with a great deal to offer to a wide variety of readers both locally in Taiwan and globally." —The Shanghai Literary Review

A Pacific island of roughly 14,400 square miles, Taiwan lies just over a hundred miles off the China’s southeast shoreline and seven hundred miles south of Japan. It has been a contested cultural space between its original aboriginal inhabitants (Taiyals and Vonums) and many generations of Chinese immigrants as well as waves of Dutch, Spanish, and Japanese colonial inhabitants. All of this provides the backdrop for some of the richest Sinophone literature in the world. Unfixed, vibrant, and deeply engaged with a sense of place, Taiwanese women writers—from the experimental poetry pioneer Hsia Yu to younger multimedia poets like Ye Mimi to powerhouse authors like Li Ang and Chu T’ien-wen—are continually pushing the boundaries of the possible and unlocking new directions for Sinophone literature in the twenty-first century.

With this first English-language anthology of contemporary Taiwanese women writers in decades, readers are finally provided with a window to the widest possible range of voices, styles, and textures of contemporary Taiwanese women writers. Each story unfolds and takes readers through fascinating narratives spanning adolescence, marriage, and motherhood as well as sex, politics and economics on many different scales—some appear as snapshots of lives in transition, others reveal whole lives as time-lapse images across decades, while a few implode into the stillness of a single bottomless moment. Individually each story expresses its own varied, expansively heterogeneous narrative; when read as a whole collection, readers will discover a pointedly gendered exploration of modern Taiwan.

For example, in Ping Lu’s “Wedding Date,” we meet a wheelchair-bound mother who seems to get younger by the day as her filial daughter prematurely ages. A talented writer in her youth, the protagonist’s imagination imbues her life with an intimacy that seems so real it almost becomes so, despite piling signs to the contrary. In “The Story of Hsiao-Pi,” by Newman Prize–winning author Chu T’ien-wen, the narrator lovingly examines the life of a troubled village boy, who builds an expected future upon the fierce if complicated love of his mother and stepfather. Taiwan itself becomes the protagonist in Tsai Su-fen’s “Taipei Train Station,” where the station serves as an aperture through which numerous lives pass, if only briefly, into view before emerging into the possibilities of the city.

Chung Wenyin recalls her first steps into literature and love through her story “The Travels and Lover of a Junior High Girl,” an adventure that explores the evolving ideas of love and the eros of art, and the open-ended possibilities of life itself. After an amateur psychic tells her that her future son, who has not even been conceived yet, is following her around, waiting for his time to enter the world, the narrator of Essay Liu’s story “Baby, My Dear” begins to search for his father. In contradistinction, Su Wei-chen takes readers into the traumatic space of a mother losing her daughter to leukemia in “No Time to Grow Up,” asking the heart-rending question if children who die so young have had enough time to understand their short existence in the mortal world. Yuan Chiung-chiung traces the dynamic and transformative process of divorce, reinvention, and love through the story “A Place of One’s Own,” while Liao Hui-ying opens a window into class identity, fate, motherhood, and, ultimately, love in the context of an arranged marriage in “Seed of the Rape Plant.” Li Ang offers a tale of Taiwanese oppositional politics, personal sacrifice, and unrequited love in “The Devil in a Chastity Belt.” Chen Jo-hsi draws the collection to a close with a poignant vignette exposing the point where international politics and the dinner table meet, somewhere between the power of imagination and anticipation and the machinations of political power in her story “The Fish.”

The quality and diversity of the stories in this anthology are representative of the work produced by the Taipei Chinese PEN, which curates, translates, and publishes the best Chinese Literature from Taiwan since its founding in 1972. Taipei Chinese PEN Center continues the work initiated by the Chinese P.E.N. Center in 1928 Shanghai under the direction of literary greats like Hu Shi, Xu Zhimo, Lin Yutang, and Cai Yuanpei, who served as its first president. It was Lin Yutang and his successor Nancy Ing Chang who became the first modern presidents of the Center in Taiwan in 1970 (refounding the journal in 1972) and the center was renamed The Taipei Chinese Center in 2008 when the Quarterly became The Taipei Chinese PEN. 2018 marks 47 years of continuous publication and under the direction of its current president, Pi-twan Huang.

"Contemporary Taiwanese Women Writers: An Anthology showcases the best examples of contemporary Taiwanese writing by women writers, all of whom have won major literary awards in Taiwan and are recognized as leading figures of Taiwan’s literary scene.… The eleven pieces can be divided roughly into several groups that address themes found not only in Taiwanese literature or Sinophone literature, but also in women’s writing and world literature.… the anthology notably includes voices from the younger generation of Taiwanese women writers. More broadly, female relationships, whether between mothers and daughters, wives and husbands, women and their burgeoning sexuality, or women and the politics of gender, certainly find resonances in women’s literature worldwide.… Contemporary Taiwanese Women Writers is a rich anthology with a great deal to offer to a wide variety of readers both locally in Taiwan and globally." —The Shanghai Literary Review

"These gems of short fiction by women writers from Taiwan are a wonderful treat. Beautifully translated into English, they unfold and flicker with wistful, comic, and enigmatic lights and shadows. The vignettes and snapshots imbue existential anxiety and street life with grim and exquisite lyricism, mixed with unstoppable yearnings for sunlight and romance." —Ban Wang, William Haas Professor in Chinese Studies and Professor of Comparative Literature, Stanford University

"What is striking about this fascinating volume of writings by the contemporary set of Taiwan’s established and emerging women writers is the eclectic range of its content. Stories explore marriage and divorce, illness and death, feminism and misogyny, sexual ambitions and desires—a thirty-year-old woman engages in casual sex in a desperate effort to get pregnant, while a fifteen-year-old fantasizes about having sex with a much older man. Together, these stories show us how Taiwan’s society is uniquely traditional and hyper-modern, provincial and cosmopolitan. An excellent collection of contemporary Taiwanese literature!" —Carlos Rojas, Professor of Asian and Middle Eastern Studies, Duke University

"This collection of short fictional works written by women from Taiwan embodies some of the finest writing in Chinese of the postwar era. Those seeking outstanding short works by women now available under one convenient cover and in English translation need go no farther than Contemporary Taiwanese Women Writers: An Anthology. Many of the literary stars of Taiwan in recent decades such as Chen Jo-hsi, Chu T’ien-wen, Ping Lu, and Li Ang are represented in it. Chu’s classic “The Story of Hsiao Pi” was enshrined in an early example of New Taiwan Cinema by Chen Kunhou and Hou Hsiao-hsien. Liao Huiying’s “Seed of the Rape Plant” is a saga of life in Taiwan from the 1960s to the 1980s and was also made into a hugely popular film. Li Ang’s work is a provocative collision of sexuality and politics. The works in this volume are saturated with teenage angst, vexed relations between young women and their parents, depictions of poverty and loneliness, and in some cases utter hilarity. This book would be a wonderful addition to a course in world literature by women. The translations are gems that will fascinate any serious reader. The stories are endearing, award-winning classics that in the original Chinese are known to avid readers of Chinese throughout the world. It is a tribute to Cambria Press’ dedication to Chinese literature and culture that these stories can now be shared with English speakers. I strongly encourage those who enjoy excellent works of short fiction to read this volume." —Christopher Lupke, Professor and Chair, Department of East Asian Studies, University of Alberta

Jonathan Stalling is Professor of English and Curator of the Chinese Literature Translation Archive at the University of Oklahoma, where he is also Deputy Executive Director and a founding Editor of Chinese Literature Today journal and book series. Stalling is the author, translator, or editor of six books, including Poetics of Emptiness (Fordham), Yíng?lìsh?: Sinophonic English Poetry and Poetics (Counterpath), and Winter Sun: Poems, by Shi Zhi (Oklahoma). Dr. Stalling’s TEDx talks on Chinese-English interlanguage art and technology are available on YouTube; and his latest installation, “Poetics of Invention,” can be found at https://poeticsofinvention.ou.edu.

Lin Tai-man, born in Taiwan, holds an MA in Social Transformation Studies and a PhD in Chinese literature from Shih Hsin University. Former Editor in Chief of the Literary Supplement of the Zhongyang ribao (Central Daily News) and Editor of the Renjian fubao (Merit Times), she is now a full-time Assistant Professor of Chinese literature at Tamkang University in Taipei. Winner of many literary awards, including the Sun Yat-sen Literary Award, Dr. Lin has authored many volumes of essays, including Shiguang migong (The Labyrinth of Time) and Ni daobie le ma? (Have You Bid Farewell?).

Yanwing Leung holds a PhD in English and American literature from Texas A&M University and is currently Associate Professor of English at National Taiwan University, where he previously served as the Chair of Foreign Languages and Literatures and Director of the International Chinese Language Program. He is a poet and a translator who has taught writing and translation both at NTU and at the Ministry of Foreign Affairs, R.O.C. He practices traditional Chinese poetry in his spare time and is the author of Lubai xin quan (Poems Inspired by the Rubaiyat) and Lubai shiyi (The Forgotten Rubaiyat: A Verse Interpretation in Chinese). Dr. Leung is currently Editor in Chief of The Taipei Chinese PEN Quarterly.

Introduction: From Taiwan: Some of the Richest Sinophone Literature by Jonathan Stalling

Chapter 5: The Travels and Lover of a Junior High Girl by Chung Wenyin (trans. Jonathan Barnard)

Chapter 7: No Time to Grow Up by Su Wei-chen (trans. Patrick Carr)

Chapter 8: A Place of One’s Own Yuan by Chiung-chiung (trans. Jane Parish Yang)