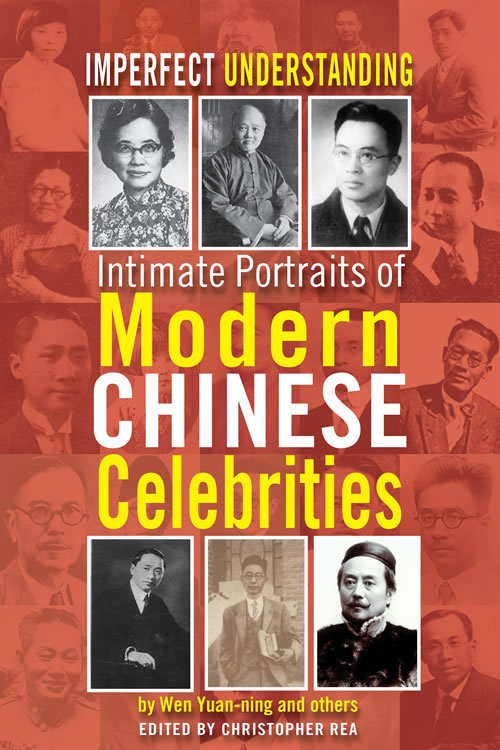 Wen Yuan-ning (1900–1984) was both an insider and an outsider on the politics of celebrity in modern China. Born into a Hakka family in the Dutch East Indies, he studied law at Cambridge University before moving to China to embark on a remarkably varied career. He taught English literature at China’s top universities, including Peking and Tsinghua, contributed to leading English-language periodicals such as The China Critic and T’ien Hsia Monthly, served in China’s legislature in Nanking, worked as a wartime propagandist in Hong Kong, and eventually was appointed as China’s ambassador to Greece.

During the heady days of Anglophone publishing in 1930s China, Wen Yuan-ning edited for The China Critic a series of “Unedited Biographies” (later “Intimate Portraits”) of famous contemporary Chinese personages. Wen and his collaborators—some of whom wrote anonymously—offered readers mischievous and idiosyncratic accounts of the careers and personalities of the people in the news. These celebrity sketches proved both controversial and popular, with several of them immediately being translated into Chinese. A selection of seventeen of Wen’s own contributions to The China Critic series was published to acclaim in 1935 as the book Imperfect Understanding. Yet Wen and his contributions to Chinese literary culture disappeared from the historical record after the founding of the People’s Republic, likely because Wen wrote in English and had close ties to the Chinese Nationalist Party.

What did it mean to be a celebrity in 1930s China? Who were Republican China’s preeminent intellectuals, writers, artists, politicians, diplomats, and businesspeople, and how were they represented in the popular press? This anthology brings together fifty rediscovered essays, written in English in 1934, which offer fascinating, close-up profiles of a constellation of celebrities. From the warlord Han Fuju to the Peking Opera star Mei Lanfang to the intellectual leader Hu Shi to the novelist Lao She to ambassador Wellington Koo to the Singaporean Chinese entrepreneur Lim Boon Keng to the deposed Qing Emperor Puyi, the series presents a panorama of Chinese elites. Imperfect Understanding constitutes a significant archival discovery, a unique artifact of the pre-war heyday of Anglophone literary culture in China.

Imperfect Understanding: Intimate Portraits of Chinese Celebrities is both an entertaining work of literature, by turns comedic and touching, and an important historical document. Its sketches represent influential Chinese historical figures, warts and all, in the eyes of contemporary observers seeking to provide readers an alternative to the autobiographical puffery of popular books like Who’s Who in China. Christopher Rea’s introduction offers new research on the forgotten literary figure Wen Yuan-ning and argues that one of the essays published under his name was written anonymously by a young man who went on to become one of modern China’s literary giants: Qian Zhongshu. This edition of Imperfect Understanding also includes multiple reviews of Wen’s book, brief biographies of the subjects of the Critic series, and a bibliography of further writings by and on Wen Yuan-ning.

"For today’s readers, these biographical essays on key cultural figures draw scholarly attention to the scene of Republican multilingual print media and their representation of socio-political topics and discussions of culture and entertainment. These Critic essays include biographical sketches of leading writers, philosophers, and artists, and of important social, political and cultural figures of the day. Rea’s edited volume brings this collection to a global audience, and provides a much-needed contextualization through a well-researched introduction and with its appendixes. ... An important contribution to the fields of modern Chinese history, biographical studies, literary aesthetics, philosophy and cosmopolitan non-fiction writing in early twentieth century China. Its attractive layout and richly informative content make the volume ideal course material for graduate seminars or advanced undergraduate courses on modern Chinese literature or history studies. Historical figures familiar to specialists become animated and approachable in the individual sketches, and the appended thumbnail biographies provide details for non-specialist readers ... a rich contribution to our growing understanding of how the multilingual media sources and a culturally and linguistically diverse readers’ community influenced the public space of Republican China." —MCLC

“Satirical, witty, and compulsive reading, these bite-size essays expose the quirks and foibles of China’s celebrities. With the clear eye and cutting tongue of an astute observer, Wang Yuan-ning’s Imperfect Understanding reveals the weird and wonderful personalities of the famous and the fabulous—be they politicians, generals, artists, teachers, writers, athletes, diplomats, or opera stars.” —Louise Edwards, Scientia Professor and Deputy Head of School - Research, School of Humanities and Languages, University of New South Wales

“Imperfect Understanding is an extraordinary artifact of Chinese literary and social history. The people written about are among the most important figures of the Republican era, and the particular perspective on them presented by the essays is of both literary and historical importance. The introduction is excellent, full of the information the reader needs to make sense of the context in which the book was originally produced. This is an important book for scholars in Chinese literature and Chinese history, as well as general readers who wish to gain an understanding of the culture of that period.” —Theodore Huters, Professor Emeritus, UCLA; and Chief Editor, Research Centre for Translations

“Wen Yuan-ning (along with his various fellow contributing authors) was the John Aubrey of his age, the author of brief, intimate, and always insightful English-language portraits of some of the most remarkable Chinese personalities of a remarkable era. Christopher Rea—the preeminent Western scholar in this area of Chinese literary studies—and Cambria Press have now rescued this gem from obscurity, making it available once again to readers. Imperfect Understanding is a valuable book for those interested in Chinese literary and social history.” —Duncan M. Campbell, Adjunct Teaching Fellow, Chinese Studies Programme, School of Languages and Cultures, Victoria University of Wellington

“The mid-1930s was an immensely important time in modern Chinese history. This collection of pieces is a sparkling set of pen portraits of key figures of the age, covering figures important in politics, culture, and social change. All those interested in the history of the Republican period will be grateful that these pieces have been collected and edited for a new generation of scholars to discover.” —Rana Mitter, Director of the University China Centre and Professor of the History and Politics of Modern China, University of Oxford

Christopher Rea is an associate professor of Asian studies at the University of British Columbia. He holds an MA and PhD from Columbia University and a BA from Dartmouth College. His previous books include The Book of Swindles: Selections from a Late Ming Collection (cotranslated with Bruce Rusk), China’s Literary Cosmopolitans: Qian Zhongshu, Yang Jiang, and the World of Letters, and The Age of Irreverence: A New History of Laughter in China, which the Association for Asian Studies awarded the Joseph Levenson Book Prize (post-1900 China) in 2017.

Wen Yuan-ning (1900–1984), also known as Oon Guan Neng, was born into a Hakka family on the island of Banka, and educated in Singapore, London, and King’s College, Cambridge. He taught English literature at universities in Peking, including Tsinghua University, and served as chair of the Department of Foreign Languages of Peking University. He subsequently became a contributing editor of the English-language weekly The China Critic (1928–1940, 1946) and editor-in-chief of T’ien Hsia Monthly (1935–1941), releasing his essay collection Imperfect Understanding in 1935. He was made a member of the Legislative Yuan in 1933 and in 1947 became China’s Ambassador to Greece, a position he held for twenty years. In retirement, he taught English literature at Chinese Culture University in Taipei.

1. Han Fu-chu, the Good Bully of Shantung, by Yih Chang-mung

Brief Biographies of Subjects and Authors of the Critic Series

Review of Imperfect Understanding in The North-China Herald (1935)

Other writings by Wen Yuan-ning