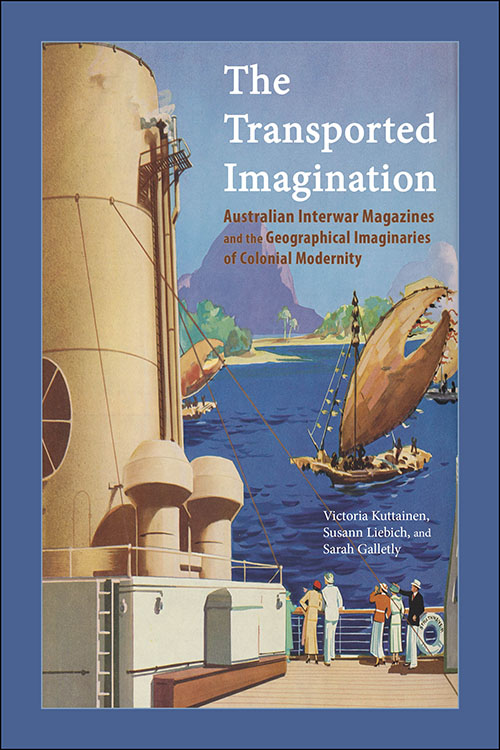 "There is much to commend in the book. The authors’ commitment to taking seriously the ways in which consumers of knowledge, through the act of reading, actively understood and negotiated complex ideas demonstrates the continued need to engage with cultural texts, especially Australian print culture. The Transported Imagination is indeed noteworthy precisely because it brings attention to magazines, which remain a desperately overlooked source of cultural activity … A welcome addition [that] would also be of interest to scholars of travel, modernity, and interwar Australia." —Australian Historical Studies

In the early twentieth century, new technologies of media, communication, and transportation opened up a world of possibilities and led to transformations of the public sphere. Amongst the hundreds of new periodicals flooding the Australian marketplace, quality culture and leisure magazines beckoned to readers with the glamour of modernity and exotic images of pre-modern paradise. Through instructive and entertaining content, these glossy modern magazines widened the horizons of non-metropolitan audiences and connected readers in rapidly urbanising cities such as Sydney and Melbourne with the latest fashions, current affairs, and cultural offerings of London, Paris, New York, Los Angeles, and beyond. Designed by fashionable commercial artists, travel advertisements for shipping companies such as Burns Philp, Cunard, Matson, and P&O lined their pages. The golden age of the culture and leisure magazine coincided with the golden age of sea travel, middlebrow aspiration, and modernity.

Focusing on the Australian interwar periodicals The Home, The BP Magazine, and MAN, this book explores the contraction of vast geographical spaces and the construction of cultural hierarchies alongside the advent of new media. This book investigates the role tastemaking culture and leisure magazines played in transporting the public imagination outward beyond the shores of Australia and upward or downward on the rapidly changing scales of cultural value. By delivering a potent mix of informative instruction, entertainment, worldliness, and escape, these magazines constructed distinct geographical imaginaries connected to notions of glamour, sophistication, and aspiration. They guided their readers through the currents of international modernity and helped them find their place in the modern world.

This book is based on thorough research into an archive of important yet under-examined modern Australian periodicals, and makes a significant contribution to the scholarly literature on magazines and middlebrow culture in the interwar period. It offers new insights into the formation of the tastes of a rapidly modernising and differentiating reading public, as well as new understandings of the cultures of vernacular modernity and colonialism. This book also offers alternative perspectives, and positions Australia’s cultural and literary history within transnational cultural flows across the Indian and Pacific Oceans. Its analysis of Australian colonial modernity thus provides a model for examining collisions of modernity and colonialism, and for investigating connections between geographical imaginaries and social mobility, in other international contexts.

The Transported Imagination will appeal to a wide range of scholars. Primary audiences are scholars of Australian cultural and literary history; and scholars of print culture, reading history, the middlebrow, mobility studies, media history, and colonial modernity in other national or local milieus. Written in a fluid, reader-friendly style, this book will also appeal to the general reader, and is of special relevance to a range of university courses and students whose research focuses on print culture, periodical studies, or travel in the context of modernism and modernity.

"An elegantly presented offering from Victoria Kuttainen, Susann Liebich and Sarah Galletly, that explores the intersecting themes of modernity, colonialism, glamour and travel in three ‘culture and leisure’ magazines in interwar Australia … There is much to commend in the book. The authors’ commitment to taking seriously the ways in which consumers of knowledge, through the act of reading, actively understood and negotiated complex ideas demonstrates the continued need to engage with cultural texts, especially Australian print culture. The Transported Imagination is indeed noteworthy precisely because it brings attention to magazines, which remain a desperately overlooked source of cultural activity … A welcome addition [that] would also be of interest to scholars of travel, modernity, and interwar Australia." —Australian Historical Studies

"The Transported Imagination offers the reader a window into a highly mobile and modern Australia with a comparative analysis of three Australian periodicals during the interwar period … Though many of us may associate the interwar period with the Great Depression, the authors explain that this was also a time when mobility and print culture reached its peak … [they] explore the complexities of the Australian experience of colonial modernity during the interwar period … [and] highlight the tension between tourist and traveller, primitive and modern, consumerism and culture, and high and low brow. … an ambitious study which balances an in-depth study of literature with a more global cultural history of travel to demonstrate Australians’ ‘world-mindedness.’" —The Journal of Pacific History

Victoria Kuttainen is a senior lecturer in English and Writing at James Cook University. From 2013 to 2018 she was also the Margaret and Colin Roderick Scholar of Comparative Literature. Most of her work focuses on narrative, geography, identity, and cultural value. She has written Unsettling Stories: Settler Postcolonialism and the Short Story Composite and published on postcolonialism and colonial modernity; middlebrow and periodical print cultures; gender, genre, and life-writing.

Susann Liebich is a Postdoctoral Fellow at the Heidelberg Centre for Transcultural Studies, University of Heidelberg. Her current research investigates reading and writing at sea and in ports in the nineteenth and twentieth centuries. She has published articles on aspects of the history of reading; periodical print culture in Australia and New Zealand; and on maritime literary cultures in First World War Studies, Mémoires du livre / Studies in Book Culture, Transfers, and in edited essay collections.

Sarah Galletly is the Margaret and Colin Roderick Postdoctoral Research Fellow at James Cook University. Her current research explores the early twentieth-century mass-market periodical cultures of Canada and Australia, with a particular focus on celebrity, gender, and travel. Her previous work has been published in the British Journal of Canadian Studies, English Studies in Canada, Journeys, and Transfers.

Introduction: A Door to the World