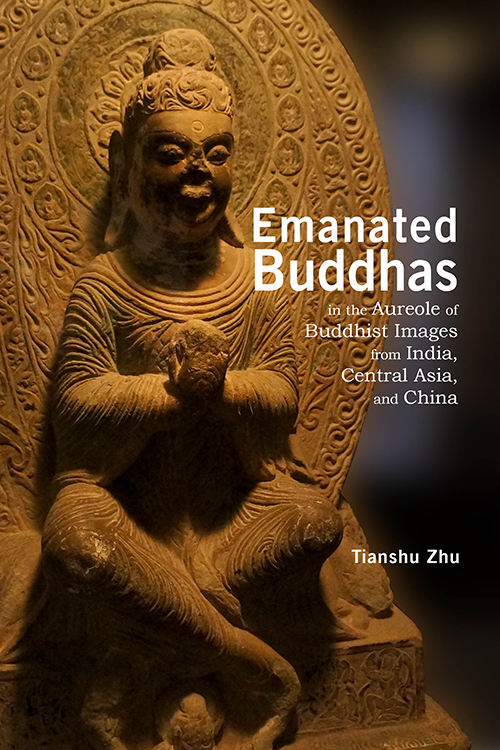 Emanated Buddhas in the Aureole of Buddhist Images from India, Central Asia, and China by Tianshu Zhu

A pioneering and painstaking study of the meaning behind the small Buddhas figures depicted in the halo and/or aureole of Buddha and bodhisattva images. Includes color images.

This book is oversized and includes 92 color images.

Very often in Buddhist art, especially Buddhist art of ancient China, small figures, mostly Buddhas, are depicted in the halo and/or aureole of a Buddha image, and, less often, of a bodhisattva image. What is the meaning and significance of this? Despite the prevalence of this motif, its meaning and its significance in Buddhist history are poorly, if at all, understood. In fact, emanating other Buddhas is associated with the fundamental nature of the Buddha and the mechanism of how the Buddha functions to spread Buddhist teachings to every corner in the cosmic world. In this regard, the study of this motif—one of the purposes of this book—is not only a study of a specific iconographic convention in Buddhist art but also a study of the revolutionary change in the way Buddha was represented, a geographical and temporal development that reflected the change of Buddha’s nature in the eyes of his followers.

Besides being a general convention, the depiction of emanated Buddhas in the aureole also appears in some of the most spectacular and sometimes widely debated iconographies in Buddhist art, for example, the dharmadhatu Buddha images, in which the Buddhist cosmologic system is shown inside a Buddha’s body, and the Mohammed Nari Stele from Gandhara. Therefore as the second task this book, this study also examines and sheds light on a number of important iconographies in Buddhist art.

More importantly, this motif had appeared in various places in Central Asia and East Asia throughout the centuries. Traditionally, Buddhist images of the same iconography across different regions are studied as one coherent subject matter, assuming they all have the same meaning. By contextualizing these images in local history and local Buddhism, which is the third task of this study, this book also aims to examine much broader issues in Buddhist history and cultural transmission.

This is an important book for students and scholars in art history, Buddhist studies, and East Asian studies.

Tianshu Zhu is associate professor in the Department of History at the University of Macau. She holds an MA and a PhD in art history from the Ohio State University. Her research focuses on Buddhist art in Central Asia, China, and and India, examining visual representations in the contexts of religious practices as well as cultural transmissions and transformations.

Part I: Buddha/Bodhisattva Images with Emanated Figures in the Aureole

Chapter 2: The Development of Images with Emanated Figures in the Aureole

Chapter 3: The Notion of Generating Other Buddhas in Buddhism

Chapter 5: Bodhisattva As The Emanator

Part II: Special Iconographies with Emanated Buddhas in the Aureole

Chapter 8: The Narrative Depictions At Kucha and Turfan

Chapter 9: A Buddha Showing Realms of Rebirth in His Aureole