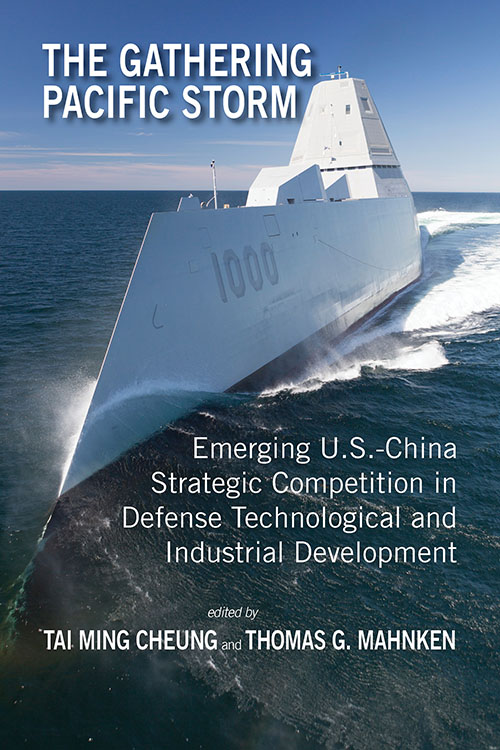 "A timely, thought provoking book ... essential reading for those concerned about the erosion of U.S. military-technical advantage. Dr Cheung and Dr. Mahnken’s book is sure to provide an important intellectual foundation for debate over this important issue. Highly recommended!" –Robert Work, 32nd Deputy Secretary of Defense and CEO of CNAS

The United States has enjoyed overwhelming military technological superiority in the post-Cold War era, but China has begun to chip away at this dominance. As distrust and strategic rivalry becomes more prominent in US-China relations, this is helping to turn what had previously been parallel but separate military research and development efforts by both countries into a directly connected competition. This contest for leadership in defense technology and innovation promises to be a long-term and highly expensive endeavor for the United States and China

While there are some similarities between this emerging US–China defense strategic competition and the twentieth-century Cold War, there are also significant differences. The US–Soviet confrontation was primarily an ideological, geostrategic, and militarized rivalry between two countries and supporting alliances that were largely sealed from each other. This twenty-first century rivalry takes place against a backdrop of globalized interdependence, the blurring of military and civilian boundaries, and the growing prominence of geo-economic determinants.

US-China military technological competition lies at the heart of the growing strategic contest between the United States and China. This is largely because this technological rivalry straddles the geostrategic and geo-economic domains covering drivers ranging from industrial policy and foreign direct investment to weapons development programs and threat assessments. Examining the nature of the US-China defense technological competition requires a more comprehensive and nuanced understanding of the complex military, economic, innovation, and other drivers at play. Moreover, this technological race is still in the early stages of development and can be expected to grow larger, more complex, and more intense, so this book provides an invaluable resource for understanding the origins and patterns of competition in different domains.

This is a pioneering examination of the burgeoning US-China defense technological competition and provides perspectives not only from US analysts but also from China and Russia. One of the major contributions of the book is the use of a competitive strategies framework that outlines some of the key considerations in the assessment of US–China military technological competition. A rich and expansive discussion of this competition across a diverse range of domains, including air, sea, space, and emerging technologies, provides a comprehensive understanding of how complex and varied this contest is becoming, as well as its strategic and global implications.

The Gathering Pacific Storm is a timely and valuable volume for students, scholars, security practitioners, and anyone involved international relations, security studies, and political science.

"This is a timely, thought provoking book on the state of the increasingly heated military-technological competition between the United States and its great power rivals, China and Russia. Coming on the heels of new National Security and Defense strategies that emphasize the return of great power competition, it is essential reading for those concerned about the erosion of U.S. military-technical advantage. Dr Cheung and Dr. Mahnken’s book is sure to provide an important intellectual foundation for debate over this important issue. Highly recommended!" –Robert Work, 32nd Deputy Secretary of Defense and CEO of the Center for a New American Security (CNAS)

"This book is essential reading for anyone seeking to understand the intensifying strategic competition now underway between the United States and China. The authors analyze the most important dimensions of that rivalry, including missiles, space and counterspace systems, military aviation, surface and undersea warfare and artificial intelligence. Best of all, the volume offers a set of sensible proposals for military planners and civilian policymakers seeking to preserve America’s vital, but increasingly challenged, advantages in military technology." –Aaron L. Friedberg, Professor of Politics and International Affairs, Princeton University

“Sino-American competition is rapidly expanding across the economic, political, and military domains. It is one of the most consequential global security issues of the 21st century. The Gathering Pacific Storm is a very good contribution to our knowledge base on US-China strategic competition. It provides an excellent primer on an important determinant of this competition's outcome—comparative defense technological and industrial strategies.” –Karl Eikenberry, Director, US-Asia Security Initiative, Stanford University

Tai Ming Cheung is the director of IGCC and the leader of IGCC’s Minerva project “The Evolving Relationship Between Technology and National Security in China: Innovation, Defense Transformation, and China’s Place in the Global Technology Order.” He is a long-time analyst of Chinese and East Asian defense and national security affairs. He is also an associate professor at the School of Global Policy and Strategy at UC San Diego. Dr. Cheung received his PhD from the War Studies Department at King’s College, London University and is the author of Fortifying China: The Struggle to Build a Modern Defense Economy (Cornell University Press).

Dr. Thomas G. Mahnken is President and Chief Executive Officer of the Center for Strategic and Budgetary Assessments. He is a Senior Research Professor at the Philip Merrill Center for Strategic Studies at The Johns Hopkins University’s Paul H. Nitze School of Advanced International Studies (SAIS) and has served for over 20 years as an officer in the U.S. Navy Reserve, to include tours in Iraq and Kosovo.He currently serves as a member of the Congressionally-mandated National Defense Strategy Commission and as a member of the Board of Visitors of Marine Corps University. In 2009 he was awarded the Secretary of Defense Medal for Outstanding Public Service and in 2016 the Department of the Navy Superior Civilian Service Medal.Dr. Mahnken is the author of Strategy in Asia: The Past, Present and Future of Regional Security (Stanford University Press, 2014), Competitive Strategies for the 21st Century: Theory, History, and Practice (Stanford University Press, 2012), Technology and the American Way of War Since 1945 (Columbia University Press, 2008), and Uncovering Ways of War: U.S. Intelligence and Foreign Military Innovation, 1918–1941 (Cornell University Press, 2002), among other works.

Part 1: Comparative Frameworks and Strategic and Policy Drivers and Plans

Chapter 2. A Chinese Military Perspective on the US Third Offset Strategy (Fan Gaoyue)

Chapter 6. Strategic Competition Between the United States and China in the Maritime Realm (Bryan Clark and Jordan Wilson)

Conclusion. The Long-Term Implications of Future US Strategy for China and Chinese Strategy for the United States (Tai Ming Cheung and Thomas Mahnken)