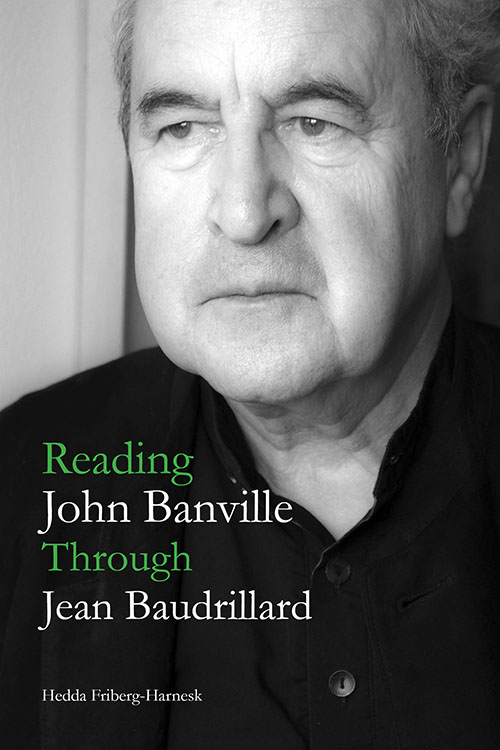 "Hedda Friberg-Harnesk sheds new light on the fiction of John Banville thanks to an original theoretical frame ... [Her] eloquent, thought-provoking study grants the reader a deeper insight into Banville’s bewitching “territory of mercurial instability” ... This brilliant book, which itself involves creative reiterations, casts light on Banville’s mature treatment of exquisitely recycled literary concerns in his more recent fiction..." — Études Irlandaises

This book is in the Cambria Contemporary Literature, Film, and Theory Series, headed by Professor Neil Murphy (Nanyang Technological University).

John Banville is one of Ireland’s greatest contemporary prose writers, widely known as the master of simile and metaphor. An artful explorer of the murky waters of memory, he is a relentless prober of the uncertainty of the human condition.

In addition to a number of plays, and innumerable magazine and newspaper articles, Banville’s sixteen novels have been enthusiastically received. In 2005, The Sea won the Man Booker Prize. Banville then went on to win the Franz Kafka Prize in 2011, the Irish PEN Award for Outstanding Achievement in Irish Literature in 2013, and the Prince of Asturias Award, the sought-after Spanish literary prize, in 2014. There has been talk too about Banville being a possible candidate for the Nobel Prize in literature.

It is thus not surprising that scholars have paid close attention to Banville’s work since his debut in the 1970s. His writing about the late twentieth and early twenty-first centuries presents a stirring and disturbing view of a world made opaque by deceptive appearances. Social philosopher Jean Baudrillard’s ideas on simulation provide an interesting lens for examining Banville’s work because Baudrillard has envisioned a universe— perhaps even bleaker than Banville’s—in which men and women lose their bearings. To Baudrillard, men and women lose their bearings in a universe where nobody is “representative of anything” and where they risk becoming simulacra—copies without originals or connection to their real selves. Reading Banville through Baudrillard elucidates Banville’s universe of radical uncertainty.

This study is the first to apply aspects of Jean Baudrillard’s thinking on simulation to John Banville’s work by tracing and analyzing instances of simulation in seven novels and two plays, which were published in 1997–2015, by Banville. The analysis sheds light on issues of duplicity, usurped identities, masks and masking, and the instability of self and reality. It shows how Banville’s work is in dialogue with the Baudrillard’s idea that simulation is an important mode of perception. There is a network of multiple and mutating connections which extend backward into the far reaches of past mythologies and forward into such realms of postmodernity as Baudrillard envisions in his descriptions of the third order of simulacra. Close readings of these texts by Banville reveal the presence of Baudrillard’s ideas incorporated in them. These include a tendency for things to float, copies to replace originals, connections to the real to be distorted or absent, and—in at least one novel—the entire human world to be an artful copy of a lost or nonextant original. As for the self, Baudrillard seems to envision the self as a wholly operational molecule, spinning within an “uninterrupted circuit without reference or circumference.” Banville’s narrating central characters, although tending to search for a unified self, are instead likely to find a vacancy at their core. Self emerges as an ignis fatuus—a ghost light fanning its own illusions of self-determination. A sense of vertiginous proximity to an existential void is a compelling presence in Banville’s texts and suggests that at their center, too, lies a vacancy, a void. This study also finds that in Banville’s work, creative acts of transformation and renewal provide a means—however fleeting—for resisting and managing that void. By reading Banville through Baudrillard, we gain important insights into Banville’s view of the human condition.

Reading John Banville Through Jean Baudrillard is an important resource for scholars, teachers, and students in the fields of contemporary literature and Irish studies.

"This is a directional study for those seeking a new interpretation of Banville’s fiction from a specific theoretical perspective. Furthermore, Friberg-Harnesk’s particular focus here is largely on Baudrillard’s ideas on simulation and the orders of simulacra. There are many fascinating and illuminating discussions on how and where the four different orders of simulation can be applied within Banville; Friberg-Harnesk is a technical critic who scrupulously applies theory to text. … she breaks new ground as no subsequent critic reading Banville in Baudrillardian terms will be able to overlook this book (7). Indeed, those interested in Banville’s postmodernism will find the work equally indispensable, given Baudrillard’s association with that term and the ubiquity of his ideas found in postmodernism studies. … Reading John Banville through Jean Baudrillard clearly demonstrates the usefulness of applying a Baudrillardian lens to Banville – particularly his later fiction – and is an excellent and conscientious addition to the widening field of Banville studies." —Nordic Irish Studies

"Hedda Friberg-Harnesk sheds new light on the fiction of John Banville thanks to an original theoretical frame: her perceptive use of Baudrillard’s orders of simulacra engages the reader in a stimulating critical conversation with the unstable and uncertain worlds and beings of Banvillean fiction. ... [Her] eloquent, thought-provoking study grants the reader a deeper insight into Banville’s bewitching “territory of mercurial instability” ... This brilliant book, which itself involves creative reiterations, casts light on Banville’s mature treatment of exquisitely recycled literary concerns in his more recent fiction, urging the reader to delve further into his work and again admire its beautifully crafted simulacra." — Études Irlandaises

"Hedda Friberg-Harnesk’s brilliant new study offers an original and intimate analysis of John Banville’s preoccupations with disguise, duplicity, and simulation. In this incisive reading of seven novels and two plays, deeply informed by the work of Jean Baudrillard, Banville emerges as one of the great writers of our age. Friberg-Harnesk shows us how to read Banville, and to read him well, as a writer not just troubled by modernist problems of existence and representation, but determined to explore the creative and restorative strategies necessary to cope with them." —Professor John Brannigan, University College Dublin

“There is a wealth of knowledge in this sensitive reading of John Banville’s work. Hedda Friberg-Harnesk uses the theories of Jean Baudrillard as a springboard into the myriad realms of Banville’s fiction, showing how his characters anxiously move between memory and imagination, between the achingly real and the self-consciously imagined. This reading of John Banville’s oeuvre in the light of Jean Baudrillard’s theory of simulacra opens up a fascinating critical engagement with the work, illuminating his literary concerns and adding to our understanding of his art as a whole.” —Professor Derek Hand, Head of the School of English, Dublin City University

"This perceptive study considers Banville’s major works of the last two decades—that 'shrouded fictional territory'—in the light of Jean Baudrillard’s theory of the inescapability of simulation and simulacra. Pinpointing the compelling sense of radical uncertainty throughout Banville’s supremely stylish and dark novels which increasingly seem to circle round a core of emptiness, Hedda Friberg-Harnesk applies Baudrillard’s arresting ideas to examine Banville’s various and progressive dissolutions of self and world in modernity with both penetration and eloquence. This book throws a fascinating new light on a wide range of Banville’s recurring motifs and preoccupations." —Patricia Coughlan, Professor Emerita, School of English, University College, Cork

Hedda Friberg-Harnesk is Associate Professor Emerita, Mid Sweden University, at Sundsvall. She holds a PhD from Uppsala University, an MAT from Brown University, Providence, RI, and a BA from the University of Connecticut, at Storrs. Dr. Friberg-Harnesk has coedited the collections Beyond Ireland: Encounters Across Cultures and Recovering Memory: Irish Representations of Past and Present. She has published in several journals such as The Irish University Review, Nordic Irish Studies (NIS) and in the series Irish Studies in Europe. She is on the International Advisory Board of the NIS.

Chapter 1. Masks, Memory, Simulation: The Untouchable and The Sea

Chapter 2. The “Problem of the Actor:” Eclipse, Shroud, and Ancient Light

Chapter 4. Cancellation by the Double? The Amphitryon Myth and Threats to the Self in God’s Gift

Chapter 5. “High Stakes” in the Symbolic Order: Love in the Wars

Chapter 6. An “Evaporation…into the Inhuman”: The Infinities

Chapter 7. “Plausible in Every Detail”: The Simulated World of The Infinities

Chapter 8. “Consigned to an Infinite Replay:” The Blue Guitar

Chapter 9. Coda: “There Is No End, Then; No Conclusion”