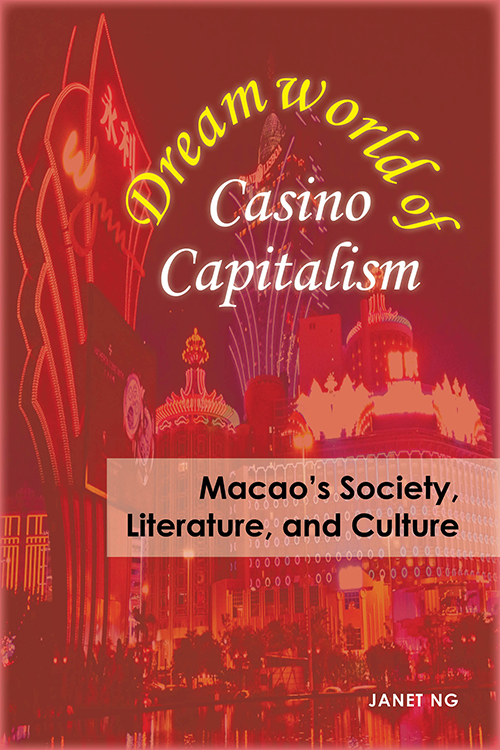 "A captivating and enlightening work on Macao’s unprecedented and unexpected development and the many social and cultural dilemmas arising from it. It is a remarkable contribution for scholars in the social sciences and humanities working on Macao, gambling development and policy, and urban and identity studies. It provides an insightful account of forms of accommodation, contestation and subversion to gambling as a form of life, inviting further consideration about the future of cities under casino capitalism and the importance of alternate narratives to redirect development." –Critical Gambling Studies

One of the largest casino-entertainment venues in Macao is called City of Dreams. True to its name, it is a city unto itself, devoted entirely to pleasure, consumption and luxury living. The massive campus includes luxury residences and high-end retail stores, restaurants, spas, extravagant performance venues and, of course, gaming facilities. The City of Dreams is an enclosed city with its own interior “boulevards” and its own theater district, called “Soho.” It even has its own blue-chip architecture, the Morpheus, a luxury hotel designed by the late Dame Zaha Hadid, DBE, using the world’s most advanced and innovative building technology.

This is a study of the nature of casino cities through Macao’s stories. The author examines how the development of the city into a world gambling and entertainment capital affects the daily lives of the city’s residents. The literary or filmic narratives of Macao capture how it feels to be citizens of these cities, the emotional responses, and thoughts of those who living within the conditions of these dreamworlds. But importantly, they also reveal the kinds of imagination and creativity of those living there and their strategies of taking hold of the narrative of the city for themselves, against the dominant state discourse.

The writings discussed in this volume are all published after the liberalization of the gambling industry in Macao in 2002, when the city embarked on an accelerated and dramatic transformation. The contemporary literary scene in Macao is lively and diverse, impressive given how small the population the population is (a little over 600,000) vis-à-vis an all-encompassing casino industry and the tens of millions of tourists it brings to the city every year. The author discusses works from fiction writers who live and work primarily in Macao, as well as refer to the works of essayists and social commentators who regularly publish in the local print media. Also included are writers who might not have a resident card but have strong personal or historic ties to the city, either through a career opportunity that brought them there, family history, or having grown up there. The author uses their works to study the effect of contemporary Macao on the global imagination, especially under the current regime of global circulation of capital and people.

Through these works, the author presents another way of understanding Macao, beyond the official measures of GDPs and economics. The author captures the often-inarticulate sentiments and aspirations of the common people, in order to challenge and change the direction, discursive as well as political, of the society. In so doing, the author overlays the official ideology of this kind of casino city that Macao represents with a complex network of the experiences and stories of those who live in it, under its specific economic and social compulsions. In each chapter of this volume, the author examines particular works that illustrate a different experiential and emotional phenomenon of life in this city.

"A candid, if not gloomy, portrait of a city in search of its own humanity, ‘trapped’ in a global corporate culture and tourist utopia that dictate the use of space and the death of the collective. More specifically, the book sheds light on the lifestyles, expectations and identity struggles of Macao residents through the soul-searching and soul-opening paths of literary and film narratives produced in Macao by people who live or have lived there following the 2002 gambling liberalization. It presents the reader with powerful imageries throughout, weaving together stories and excerpts from fiction books and essays as well as film descriptions with elaborate theoretical discussions that channel us back to the world of academia. ... a captivating and enlightening work on Macao’s unprecedented and unexpected development and the many social and cultural dilemmas arising from it. It is a remarkable contribution for scholars in the social sciences and humanities working on Macao, gambling development and policy, and urban and identity studies. It provides an insightful account of forms of accommodation, contestation and subversion to gambling as a form of life, inviting further consideration about the future of cities under casino capitalism and the importance of alternate narratives to redirect development." –Critical Gambling Studies

Janet Ng is Professor of East Asian Literature in the Department of English at the City University of New York, College of Staten Island. She holds a PhD from Columbia University. In addition to having published numerous articles and translations in academic journals, Professor Ng’s book publications include Paradigm City: Space, Culture, and Capitalism in Hong Kong (SUNY Press), The Experience of Modernity: Chinese Autobiography of the Early Twentieth Century (University of Michigan Press), and May Fourth Women Writers (Research Centre for Translation, Chinese University of Hong Kong).

Chapter 3: The Struggle for Memories in the City of Heritage

Chapter 7: Extraordinary Treasures in a City of Old Things