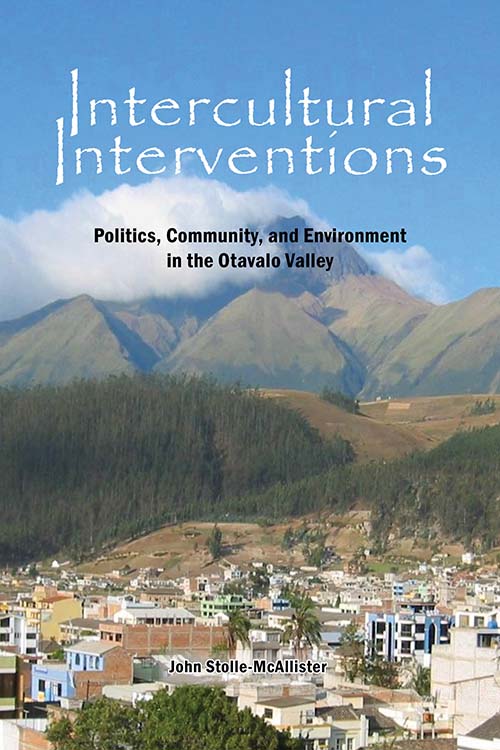 Intercultural Interventions: Politics, Community, and Environment in the Otavalo Valley by John Stolle-McAllister

A penetrating examination of interculturality and its role in politics, community, and environment in the Otavalo Valley of Ecuador.

Ecuadorian and other Latin American activists and academics involved in decolonial political projects. Emanating from social sectors marginalized by the processes of modernity, interculturality provides a grounded critique of the ethnic, class, gender and epistemic exclusions of modern liberal hegemony. Assuming a decolonial standpoint, intercultural theorists argue that a just and sustainable society can only be built by working to rid social institutions of structural inequalities and exclusionary practices. They reject the notion that any one tradition has all of the answers to social problems, instead insisting that solutions are created in the spaces between cultures. So long as inequality and exclusion exist, however, knowledge, practice and cooperation can never be truly shared.

This book examines cultural and political changes in Ecuador, and particularly in the Otavalo Valley of the Northern Sierra, in the wake of the country’s Indigenous movement of the late twentieth and early twenty-first centuries. The primary focus is on the decade between 2006 and 2016. This period represents an important juncture, as people in Indigenous communities began constructing the “new normal” after a time of profound political, cultural and social change, brought about by the concerted effort of their organizations. The election of Rafael Correa on a very progressive platform also represented, ironically, the decline of the national Indigenous organizations as institutional political actors. That is not to say their disappearance, but rather their transformation into something else. The “new normal” also does not imply a complete break with the past and the forging together of something completely different. Rather, it was the weaving together of different strands of the cultural tapestry of collective life. Many Kichwa people in this period continued to live and rework their traditional practices and belief in a context of greater exposure to and contact with other cultural groups. Although these communities were never isolated from others their relationship changed as a result of the mobilizations from 1990s onward. Those mobilizations themselves, of course, were part of a much longer historic trajectory of resistance, autonomous development, and internal and external negotiations. The construction of this new normal, finally, did not happen simply as the manifestation of some collective will. Rather it was the result of multiple and constant negotiations as individuals and groups asserted new or transformed identities and practices while they navigated drastically changed landscapes, some of their own doing and some well beyond their control.

The movement’s fight for the rights of Indigenous peoples, while focused on issues of land rights, political participation, autonomy and cultural difference, never called for separation from its majority Mestizo population. Instead, the movement articulated its demands around a call for interculturality, that is, a process through which the country’s different cultural groups ought to seek out new relationships built on equality, respect, coexistence and mutual learning to create the conditions for a more just and sustainable country. While on the surface such a proposal might seem little different than multiculturalism, it staked out a decolonial position by recognizing that not only were cultural groups different, but that their relationships were built on historic and continuing inequality. They demanded, therefore, a profound transformation of cultural, political and epistemological structures.

Intercultural Interventions: Politics, Community, and Environment in the Otavalo Valley documents and analyzes how the concept of interculturality intervened in theoretical discussions of social change, the disruption of colonial-era political institutions in Otavalo and Cotacachi, the re-constitution of the idea of Kichwa community, and how intercultural strategies were used to define and implement solutions to environmental problems. By paying attention to the often uneven and ambiguous ways in which interculturality intervened in people’s public lives as a result of the success of the Indigenous movement, this book contributes to decolonial theory by connecting that critique to the complex changes that took place in Andean Kichwa Ecuador of the first part of the twenty-first century.

John Stolle-McAllister is Associate Professor of Modern Languages, Linguistics and Intercultural Communication, and Associate Dean of the College of Arts, Humanities, and Social Sciences at University of Maryland, Baltimore County. He earned his BA from Bates College and his MA in Hispanic Literatures and PhD in Comparative Studies of Discourse and Society from the University of Minnesota. His research and teaching interests include cultural change, environmental issues, and social movements in Latin America. He authored Mexican Social Movements and the Transition to Democracy, which analyzes two towns’ resistance to development projects that threatened their livelihoods and their sense of community. He has been engaged with Kichwa communities in Ecuador since 2006.

Chapter 4: Kichwa Community in the Rural and Urban Crossroads