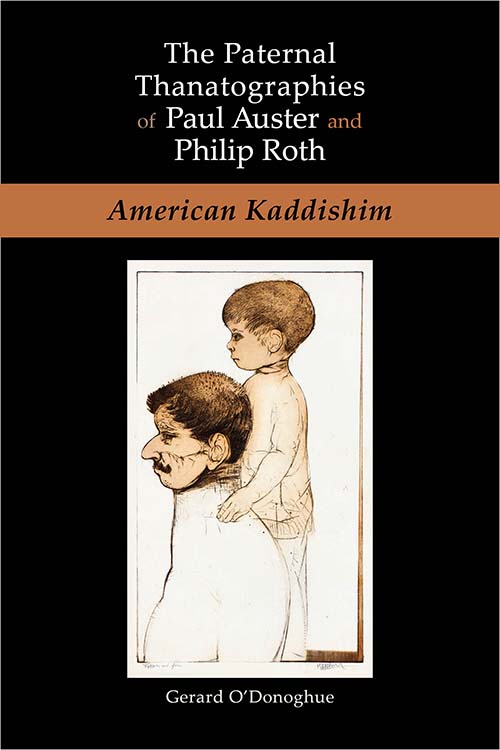 A brilliant interpretation of Auster's and Roth's text as kaddishim through the juxtaposition of their given names in textual incorporation and acts.

In the span of little more than a decade, Paul Auster and Philip Roth—two writers radically dissimilar in style and vision—each produced a series of texts that bore the imprint of the author’s father’s death. This study examines these two series: Auster’s The Invention of Solitude (1982) and The New York Trilogy (1987), and Roth’s The Facts (1988), Deception (1990), Patrimony (1991), and Operation Shylock (1993). Within these two transgeneric series, Auster and Roth juxtaposed the textual incorporation of their given names with the thanatographic acts they dedicated to their fathers, Sam Auster and Herman Roth. This juxtaposition prompts us to reflect upon the status of the author’s given name as a textual inheritance and vehicle of communal memory.

Auster’s and Roth’s assertions of artistic autonomy from familial and ethnoreligious obligations have been career-defining. However (and perhaps unsurprisingly), the writing prompted by the deaths of their fathers retraces their respective itineraries as Jewish sons and as American writers. As these itineraries unfold, aesthetic differences between the two authors cannot obscure the historical commonalities shared by two men born fourteen years apart in Newark, New Jersey, as grandsons to the Galician Jewish immigrants who bore the names ‘Auster’ and ‘Roth’ across the Atlantic and into American life.

By examining the composition histories of and the intertextual indebtedness within each of these series, this study offers a reading of Auster’s and Roth’s works as forms of kaddish. While readers may be justifiably skeptical at the thought of placing liturgical language in the mouths of avowedly secular writers, this study argues that Auster’s and Roth’s works engage, tendentiously, in a discourse that reconciles the bereaved child to the limitations, merits, and the loss of the deceased parent. In doing so, these writers are drawn into a broader discourse of Jewish filiation in the United States under conditions that oblige them to subordinate their originality as literary authors to their derivativeness as historical and genealogical subjects. To read these texts as kaddishim is to recognize Auster and Roth as being engaged in active projects of inheriting the names, myths, and historical predicaments entailed by being their fathers’ sons.

Gerard O'Donoghue is Senior Language Lecturer in Expository Writing at New York University. He holds a DPhil and MSt from the University of Oxford, and a BA from Trinity College, Dublin. His work has previously appeared in Philip Roth Studies, Notes and Queries, and the Dublin James Joyce Journal.

Chapter 2: “The Objects of a Dead Man”: Inheritance and Theft

Chapter 4: The Holocaust in American Memory

Chapter 5: The Pillow of Stone: Sacred Texts in Secular Writing