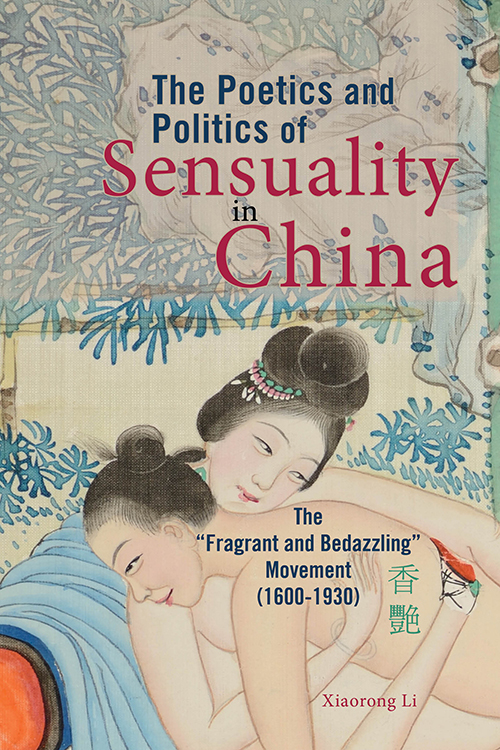 The Poetics and Politics of Sensuality in China: The “Fragrant and Bedazzling” Movement (1600-1930) by Xiaorong Li

"Professor Li proves with rigorous, persuasive scholarship that the xiangyan genre was indeed a political exercise with a 600-year lineage. ... her study is diachronic; the poems and attached theories were aggressively articulated in the late Ming, continued through the Qing—despite charges of indecency—and taken up with zeal in the Republican era. ... she also firmly and solidly, with elegant argument and resourceful use of paratextual material, proves that poets, anthologists, editors, and essayists not only believed in the power of the sensual, but also advocated the authority of the sensual." —China Review International

By charting a history in which sensualist poetry reached unprecedented and unsurpassed heights through late Ming poets, experienced a period of hibernation during most of the Qing, and then reemerged to awaken the senses of late Qing and early Republican readers, The Poetics and Politics of Sensuality in China brings to light an important Chinese literary tradition and underscores intellectual trends that have been neglected, marginalized, misunderstood, and even condemned.

Uncovering an important but neglected part of history during which the freelance intelligentsia, who emerged in late imperial and early Republican China, countered the political mainstream by drawing on a long yet marginalized tradition of sensual lyricism, this book offers the first history of how “fragrant and bedazzling” (xiangyan) became a guiding aesthetic of countercultural movements from the late Ming to the early Republican era—roughly, from the late sixteenth century to the early twentieth century. Sensualist poets and other writers of these eras extolled amorous desire and romantic love. Through erotic poetry, they rebelled against not only orthodox Neo-Confucianism but also the radical cultural reform agenda of the late Qing and the New Culture Movement of the Republic. In eras that emphasized sociopolitical functions of literature, they promoted classical lyricism and the satisfaction of individual expressive needs.

Drawing on extensive archival research, this book argues that sensual lyricism is more political than its sensuous surfaces—and that China’s lyrical tradition is sexier and more “modern”—than existing histories have led us to believe. This study demonstrates that dominant political ideologies and cultural practices of early modern China always faced counteractions in the form of a discourse of sensuality, femininity, and romance. The book examines myriad primary sources, such as the monumental anthologies of sensual poetry compiled in both the late Ming and the late Qing periods, which are brought to critical attention for the first time. Bridging literary and intellectual history, the study surveys three hundred years of poetry and essays, from individual collections to voluminous anthologies, and from traditional books to modern magazines.

The first half of the book focuses on materials produced during the Ming, and the second half examines publications of the turn of the twentieth century. In her examination of these sources, Xiaorong Li shows that the poetics of sensuality was political on personal and historical levels during and beyond the late imperial period. Sensuality and decadence, Li argues, were forces of literary modernization, as well as an important continuity between the eras often referred to as “premodern” and “modern.” Li also relates Chinese sensual literature to “decadent” movements in late nineteenth- and early twentieth-century Europe. In both contexts, while perceived as a reflection of moral decay, decadent literature posed challenges to social and cultural norms by representing the repressed individual body and its cultural expressions. This comparative perspective brings us toward a better understanding of sensualism as a part of modernity.

"Xiaorong Li definitively establishes the inherent boldness of the lyric poet in late imperial and modern China. In her confident and far-reaching book, ... Professor Li proves with rigorous, persuasive scholarship that the xiangyan genre was indeed a political exercise with a 600-year lineage. ... Professor Li’s study is diachronic; the poems and attached theories were aggressively articulated in the late Ming, continued through the Qing—despite charges of indecency—and taken up with zeal in the Republican era. ... In addition to her analysis of motifs, Professor Li makes a rarely offered, but highly mete, defense of poetry, arguing for the compelling nature of lyric poetry in these eras. ... not content to elucidate the main features and exemplars of the xiangyan as a genre of poetry; however, she also firmly and solidly, with elegant argument and resourceful use of paratextual material, proves that poets, anthologists, editors, and essayists not only believed in the power of the sensual, but also advocated the authority of the sensual ... Professor Li with meticulous argument proves that these poets indeed spoke not only in intimate mode, but also over six centuries to an expectant public, in a fully self-aware, declarative, politicized voice." —China Review International

“'Fragrant and Bedazzling,' as a poetic genre, a gendered imaginary, and a structure of feeling, marks one of the most neglected literary phenomena of early modern China. Professor Xiaorong Li has offered an inspiring and fascinating study of how Chinese elite and popular cultures conceive of eroticism, and how writings about sensuality facilitate both libertine aestheticism and body politics. As the first of its kind, The Poetics and Politics of Sensuality in China will be of great importance to anyone interested in Chinese history of sexuality and textuality, gender studies, and affective modernity." —David Der-wei Wang, Edward C. Henderson Professor of Chinese Literature, Harvard University

“Through her explorations of unknown or overlooked poets and underappreciated anthologies, The Poetics and Politics of Sensuality in China allows Xiaorong Li to reach innovative and persuasive interpretations of the role of sensualist poetry in periods of intense political change: sensual, even erotic, verse championed the liberation of individual feelings from Confucian efforts to suppress the public demonstration of strong emotions. Her work is pathbreaking; it will necessitate new and more complex interpretations of the “modernization” process in early twentieth-century China as Li traces this subversive literary form from anthologies of ancient poets into the modern magazine and the private collections of May Fourth authors. This is a first-rate example of literary discovery and pathbreaking interpretation.” —Robert E. Hegel, Professor Emeritus of Chinese Language and Literature, Washington University, St. Louis

"The scholarship in this study is impeccable. Each chapter presents an in-depth analysis of interesting and important writers or collections, many of which are ordinarily overlooked in standard literary histories. There is wealth of learning and prodigious source excavation evident in each chapter. Many original sources—poems, prefaces, and other documents—are presented, discussed, and accurately translated for the first time. I doubt that anyone can match this author's mastery of the renegade tradition of 'sensuous poetry' during the Ming, Qing, and early Republican Period." —Ronald Egan, Confucius Institute Professor of Sinology, Stanford University

Xiaorong Li is Professor of Chinese literature at the University of California, Santa Barbara. She holds a PhD and an MA from McGill University, as well as an MA and BA from Peking University. Dr. Li is the author of Women’s Poetry of Late Imperial China: Transforming the Inner Chambers, and her articles have been published in several journals, such as Nan Nü: Men, Women, and Gender in China and Harvard Journal of Asiatic Studies.

Chapter 1. “Recluses in the Arms of Women”: The Emergent Non-official Literati and Their discourse in the Late Ming

Chapter 3. Sensualism or Sensationalism?: The Textual Politics of Poems on Beautiful Women

Chapter 4. “Food and Sex are the Principal Desires”: The Elevation of Sensuality during the Late Qing

Chapter 6. “I Love Beautiful Women as Much as my Country”: The Political Agenda of Fragrant and Bedazzling Magazine