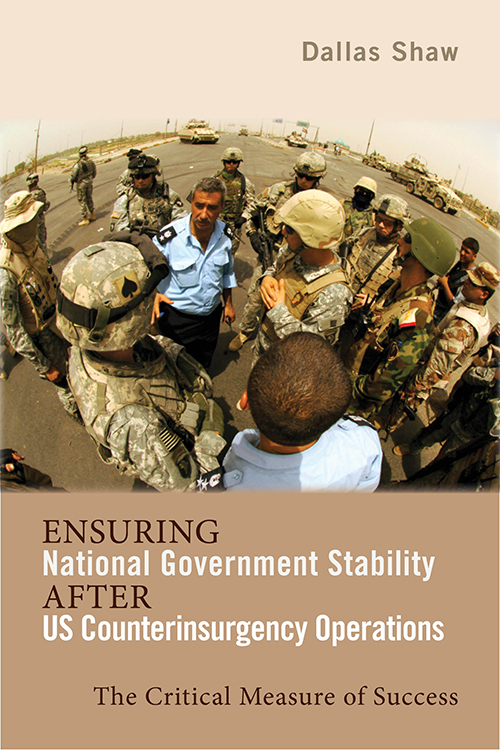 Ensuring National Government Stability After US Counterinsurgency Operations: The Critical Measure of Success by Dallas Shaw

"A brilliant and insightful work that gets to the heart of counterinsurgency theory. ... a must read for all who want to truly understand what it takes to implement a very complex doctrine and theory in real-world conflicts." —General Anthony C. Zinni, USMC (ret.)

The use of American combat formations to assist another state in killing its own rebellious citizens is an immense departure from normal international interactions between the US and states the US supports. In fact, the US has only used conventional combat formations on ten occasions to assist a foreign state in defeating their own insurgencies—in nine of these cases, the US was the lead. The employment of US combat formations in the COIN operations of another state is indicative of how dire US policy makers perceived the situation and their certitude that the host-nation could not defeat the insurgency and/or protect its people on its own.

Before 1950, the US intervened twice as often using combat formations in foreign counterinsurgencies as after 1950, but remained just as long. However, the states that resulted from US COIN interventions before 1950 have tended to last an average of ten times longer after US forces withdrew than the states that resulted from interventions after 1950, before violent overthrow or significant loss of territory. Why?

In this first longitudinal and latitudinal study of all US foreign COIN interventions using combat formations, Dallas Shaw examines the variables involved in increasing state longevity after withdrawal (SLAW). This book proposes a theory of state-centric COIN such that state longevity increases after US withdrawal when the US employs institution inhabiting strategies to develop host-nation governance and security in the course of COIN interventions. This book uses small-N qualitative case-study methodologies to both develop and to test his theory of state-centric COIN. He relies on process tracing, contextually constrained historical comparison, and hoop tests to both infer a theory of state-centric counterinsurgency and test it alongside competing hypotheses.

This study examines four key detailed case studies and then combines this with qualitative methodologies to identify the variables most associated with increases in SLAW. Shaw compares two cases where the US intervened and created tabula rasa conditions of governance and security and in essence started from scratch to create a new state during a COIN intervention. He then pairs two other cases of US COIN intervention in existing host-nations. The result is a latitudinal comparison of all four cases to determine which variables are most closely related to increasing SLAW.

Ensuring National Government Stability After US Counterinsurgency Operations is an important volume for all security studies, political science, and professional military education collections. It will address how the US defines success in large-scale COIN and helps to create states that are able to endure long after US withdrawal. This book will help policy makers think about how to intervene, when it chooses to, and how to describe the goals of intervention in foreign COIN.

"Dallas Shaw has written a brilliant and insightful work that gets to the heart of counterinsurgency theory. It provides an understanding and frank critique of our efforts in conflicts, past and present, to change societies. This is a must read for all who want to truly understand what it takes to implement a very complex doctrine and theory in real-world conflicts." —General Anthony C. Zinni, USMC (ret.)

"This book is essential reading for scholars of counterinsurgency. Dallas Shaw introduces a new concept into the COIN conversation which has both explanatory value and policy relevance. By tackling the question, why do COIN efforts unravel after U.S. combat formations withdraw, his book provides important insights for security studies scholars as well as policymakers who aim to better prioritize resources when executing a counterinsurgency campaign." —Rebecca Patterson, LCOL US Army (ret.), Associate Director, Security Studies Program, Georgetown University

Dallas Shaw teaches expeditionary warfare with the Marine Corps’ professional military education program. He holds a PhD from Virginia Tech, an MS from Marine Corps University, and a BS from George Mason University. Dr. Shaw retired as a Marine Corps officer in 2016 after 27 years of service in Marine force recon and the infantry. He served two tours in Iraq and one in Afghanistan and has taught conventional and special operations for over 10 years.