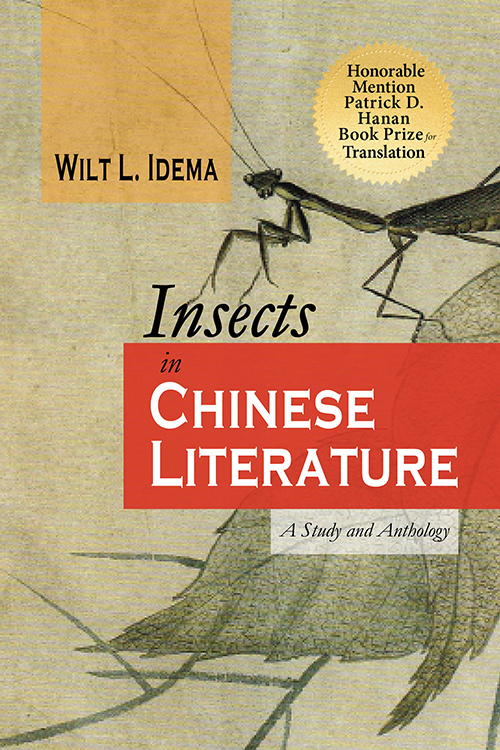 Insects in Chinese Literature: A Study and Anthology by Wilt L. Idema

"Will appeal to many audiences: entomologists and insect lovers will find it delightful, while specialists in Chinese literature will appreciate the copious notes and careful documentation of each text’s provenance." —Journal of the American Oriental Society

This book helps to fill this gap. The first part of this volume begins with the fascination of modern author Lu Xun with entomological literature and satiric animal tales from the West. The book then traces the characterization of individual insects in three thousand years of classical Chinese poetry, from the ancient Book of Odes to the Qing dynasty (1644–1911), as emblems of virtues and vices. Separate chapters are dedicated to the selfless and diligent silkworm, the pure and outspoken cicada, the social organization of the ants and the bees (as well as the philandering tendencies of bees and butterflies), fighting crickets and disastrous locusts, slanderous flies, and sly mosquitoes, as well as body parasites as lice, fleas, and bedbugs. Each chapter includes extensive translations, highlighting lesser-known aspects of well-known poets and introducing original works by lesser-known authors.

Preceding the second part of the book is a short intermezzo devoted to insects in classical and vernacular narrative literature, which shows a preference for tales in which insects appear in human shape. The second part of the book delves into the popular literature of late imperial China, in which insects spoke their minds in the formal settings of weddings, funerals, wars, and court cases. A representative selection of such ballads and plays is discussed and translated and is followed by an epilogue, which contrasts the treatments of insects in Chinese and Western literature.

By contrasting the ways in which traditional Chinese belles lettres, traditional classical and vernacular literature, and popular songs and ballads treat insects, it becomes clear that each of these written traditions portrays insects in particular in its own way: as examples of virtues and vices, as fairies and demons in human guise, and as contentious characters speaking in their own voice. While some insects basically remain the same in all three traditions, other insects show unique characteristics in each tradition. Spiders, for instance, transform from wily hunters in classical poetry, to exhibitionists maidens in vernacular narrative, and to champions of justice in popular songs and ballads. Last but not least, the search for texts on insects reveals many works of considerable literary value which are presented in highly readable renditions.

“It is always a pleasure to pick up a book and immediately know the person who wrote it. In a few sentences, one recognizes Wilt Idema, whose distinctive wit and erudition here ventures into the realm of insects. From the elite classical idiom to the popular, Professor Idema pursues the signifying bugs of the Chinese tradition. Beginning with a discussion of Lu Xun’s collaborative Chinese translation of a German translation of Dutch insect fables, Idema shows how anthropomorphic fabulation has indeed a rich tradition in Chinese popular literature. As always, Idema provides a wide range of delightful and readable translations that demonstrate a hitherto unknown side of Chinese literature.” —Stephen Owen, James Bryant Conant University Professor, Emeritus, Harvard University

"Insects in Chinese Literature offers valuable insights into Chinese tradition and society through cultural entomology. From classical poetry and rhapsodies to popular ballads and drama, from canonical literary figures to modern performers, the representation of various insects opens up a rich array of imaginative possibilities. Wilt Idema’s wonderful translations introduce the reader to many original and thought-provoking works. The materials also throw light on cultural connections and comparative literature; through them the author traces the arc of Indian insect tales traveling to Europe and China and examines Lu Xun’s fascination with and translation of insect stories from the West." —Wai-yee Li, Professor of Chinese Literature, Harvard University

"This is a work of enormous scope and erudition. It is the first comprehensive study and translation into English of Chinese literary works dealing with insects. The linguistic demands of this sort of work are very considerable as one needs to be able to translate classical writings from antiquity as well as ballads in regional languages. There is no comparable work available, and this book opens up a fascinating insect world as imagined by countless scholars, singers and storytellers who have used insects as a motif to relate to vital concerns in the human world. Insects represent human beings at their best and their worst, as slanderers, philanderers, rapacious officials, predators, brawlers, seducers and so on. In this way the volume resonates with vital human concerns such as the evanescence of life and the causes of strife and dissension. The translations deal with a huge number of social and cultural topics, both philosophical and prosaic. The book is written in an accessible fashion that will attract a wide range of readerships. This would include those with a scholarly interest in Chinese culture, college teachers seeking engaging material on the Chinese natural world and the general reader with an interest in representations of nature and animals across different cultures. This work complements similar works in European and classical studies." —Anne McLaren, Professor in Chinese Studies, University of Melbourne

"There is no other book that I am aware of that provides a discussion of Chinese classical writings about insects, and the research in this book has been presented very well. Written in a refreshingly accessible manner, this book would be of particular interest to anyone who wants to know about Chinese popular literature." —Olivia Milburn, Professor of Chinese Language and Literature, Seoul National University

"That prodigiously productive scholar and translator of Chinese literature is at it again. This time Wilt Idema takes us into the teeming world of creepy, crawling things—insects. Entertaining and erudite, and covering a mind-boggling range of genres, serious and parodic, the extraordinary range of Chinese writing on this subject—from culturally venerated insects like silkworms, cicadas, and crickets to universal scourges like fleas, mosquitos, and lice—over millennia is here made available for the first time." —Judith T. Zeitlin, William R. Kenan, Jr. Professor, East Asian Languages & Civilizations, The University of Chicago

"Insects in Chinese Literature will appeal to many audiences: entomologists and insect lovers will find it delightful, while specialists in Chinese literature will appreciate the copious notes and careful documentation of each text’s provenance. The works included will enrich both the Chinese and the comparative literature classroom. Quirky and eclectic, this anthology is full of unexpected charms. … the translations of the works themselves are appealing and instantly accessible…. The first section on belles lettres pays homage to the traditional Chinese leishu … The notes in each chapter also contain a wealth of material, including extensive summaries and explanations of insect legends … alluded to in the translated works. In addition to the intrinsic interest of the translated works themselves, this section offers a valuable overview of insect symbolism in traditional Chinese literature. … The final section on popular literature is the highlight of the book for this reviewer, with a rich selection of ballads, precious scrolls, and performance texts. … These popular works are entertaining, ironic, and deliberately parodic. They would make excellent additions to a variety of undergraduate courses on Chinese literature." —Journal of the American Oriental Society

Wilt L. Idema is Professor Emeritus of Chinese Literature at Harvard University. A recipient of the prestigious Special Book Award of China, Dr. Idema’s many publications include The Red Brush: Writing Women of Imperial China; Personal Salvation and Filial Piety: Two Precious Scroll Narratives of Guanyin and Her Acolytes; Meng Jiangnü Brings Down the Great Wall: Ten Versions of a Chinese Legend; Heroines of Jiangyong: Chinese Narrative Ballads in Women’s Script; The White Snake and her Son; Judge Bao and the Rule of Law: Eight Ballad-Stories from the Period 1250–1450; Monks, Bandits, Lovers and Immortals: Eleven Early Chinese Plays; The Butterfly Lovers: The Legend of Liang Shanbo and Zhu Yingtai; Escape from Blood Pond Hell: The Tales of Mulian and Woman Huang; Battles, Betrayals, and Brotherhood: Early Chinese Plays on the Three Kingdoms; The Generals of the Yang Family: Four Early Plays; The Resurrected Skeleton: From Zhuangzi to Lu Xun; and ”The Immortal Maiden Equal to Heaven” and Other Precious Scrolls from Western Gansu.

Part I: Insects in Belles Lettres

Chapter 4: Fables on the Praying Mantis and the Spider

Chapter 5: The Ant, the Bee, and the Butterfly

Chapter 6: The Cricket, the Grasshopper, and the Locust

Chapter 7: The Fly and the Mosquito

Chapter 8: The Scorpion, the Louse, the Flea, and the Bedbug

The Names of the Thirty-Six Kinds of Insects

The Precious Scroll of the Marriage of the Mantis

The Dragonfly’s Abduction of the Bride

The Mantis Abducts His Bride

The Dung Beetle Abducts His Bride

The War of the Insects

The Battle of the Insects

The Song of the War of the Fly against the Mosquito

The White Louse Voices his Grievances