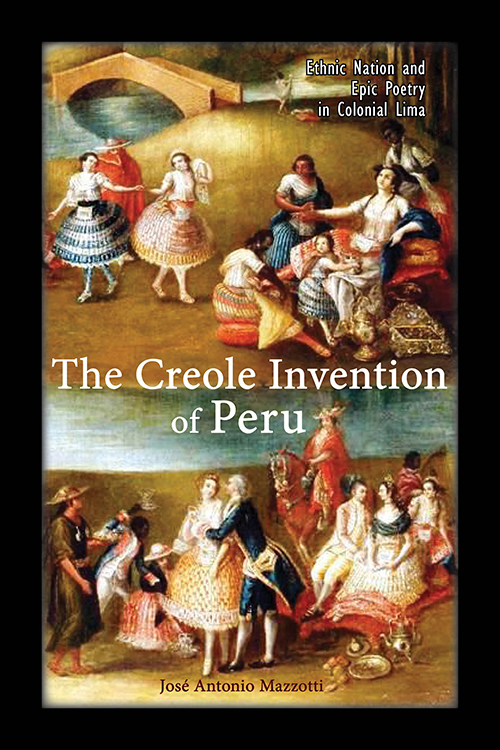 "No other study has attempted what this book has done. ... The book excels in clarity and accessibility, a feat not easily achieved, given the variety of cases presented and the complexity of argumentation applied. This is a significant contribution to the study of the literature of the Spanish viceroyalties as well as that of the era of Latin American Independence." — Rolena Adorno, Yale University

The Creole Invention of Peru deals with a specific social formation, the criollos or Creoles, particularly the beneméritos or descendants of conquistadors, whose study has almost always framed them as belonging to a colonial past that was supposedly erased and surpassed during the Republic.

This study demonstrates that the Creoles who emerged from this situation developed strategies of survival and negotiation and many mental habits that are still present in Peru today. The first generations of Creoles created an ethnic identity that can be understood as “national” only in the archaic and pre-Enlightenment sense of the word, without necessarily looking for independence from Spain, but with local patriotic aspirations.

Thus, although this study speaks mostly about the past, it aims to explain the present and the flaws of a supposedly democratic, modern national state, still obedient to the interests of internal colonialism and the traditional Europoid ethnic prevalence in Peru. Among other merits, this book contributes to decolonial theory through the historical and cultural analysis of a dominant group.

"No other study has attempted what this book has done. The Creole Invention of Peru takes into account the whole domain of epic poetry written in the viceroyalty of Peru, helpfully juxtaposing it to the epics of the viceroyalty of New Spain (Mexico) and Spain. Identifying persistent themes and their variations, this book advances the question: what can we say it all means? The book’s organization allows the reader to select topics and authors at will but also to follow its unfolding arguments in the consecutive reading of the chapters. The book excels in clarity and accessibility, a feat not easily achieved, given the variety of cases presented and the complexity of argumentation applied. This is a significant contribution to the study of the literature of the Spanish viceroyalties as well as that of the era of Latin American Independence." — Rolena Adorno, Sterling Professor of Spanish, Yale University

"A valuable addition that brings attention to the cultural production of Latin American and Spanish authors at several historical moments. The epic poems portray the realities confronted by the Spanish conquistador and the indigenous people in the Americas during the Spanish invasion, while also offering unique insights into the models of colonization in diverse geographical areas. José Antonio Mazzotti has done a superb job in examining the ways in which these literary texts provide a detailed account of historical events from the Latin American point of view and offering a postcolonial critique of these events. The book provides historical background that will be very helpful for a non-specialized audience. At the same time, it is a valuable scholarly resource because it provides a comprehensive overview of the cultural production of the period, the importance of literary studies, and how scholars have interpreted it in recent times. The detailed analysis of epic poems, chronicles, and archival documents constitutes a significant cultural, literary, and ethno-historical contribution that is essential for a deeper understanding of colonialism in the Americas, giving the reader an important first-hand testimony on the political, cultural, and social life of indigenous people in the Americas.” — Raúl Marrero-Fente, Professor of Spanish and Law, University of Minnesota

José Antonio Mazzotti is the King Felipe VI of Spain Professor of Spanish Culture and Civilization at Tufts University. Dr. Mazzotti holds a PhD and MA from Princeton University, an MA from the University of Pittsburgh, and a Licenciatura from Pontificia Universidad Católica del Perú. In addition to several journal publications, his books include Encontrando un inca: ensayos escogidos sobre el Inca Garcilaso de la Vega, Incan Insights: El Inca Garcilaso's Hints to Andean Readers, Creole Subjects in the Colonial Americas: Empires, Texts, Identities, and The Other Latinos: Central and South Americans in the United States.

Chapter 5: Rodrigo de Valdés Between the Empire of Peru and the Latinization of the Language

Chapter 6: Peralta, Inca Garcilaso, and the Genesis of Creolism in Lima Fundada