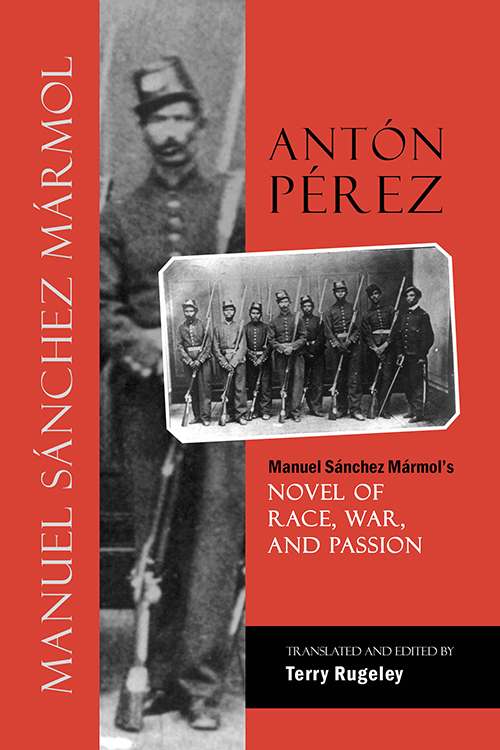 "Few historians know and understand the turbulent, often bloody decades of the mid-nineteenth century in the Mexican southeast as well as Rugeley does. By weaving together context and analysis, he brings forth complexities that have been flattened out by seamless patriotic narratives. His translation is remarkable in that it manages—by, among other things, preserving the costeños’ open-ended words and redolent speech patterns—to re-create, in a foreign language, a holistic sense of time and place ... a powerful, relevant, fascinating read." —Hispanic American Historical Review

In 1904 Mexican author Manuel Sánchez Mármol published a short novel entitled Antón Pérez. It chronicles the origins and adventures of its eponymous hero, a poor and ethnically mixed young man from a small town in the remote tropical state of Tabasco. It draws from the author's direct personal experiences in what had been one of his home state’s most important struggles, the resistance to the French Intervention of 1861-1867. Largely forgotten today outside of a handful of regional specialists, Antón Pérez is an important part of Latin American literary history not only as a portrait of a place and time, but for its real literary merits. This translation is the first to make this important work available to an English-language readership.

It is an important book for collections not only in Latin American studies but also translation studies, literary history, and world literature.

"Antón Pérez tells the story of a momentous, transformative conflict in which the good guys beat the odds and won. ... Terry Rugeley’s introduction and copiously annotated translation make it accessible to an English-speaking audience while at the same time throwing light on its more engaging features: the peculiarities of the Tabascan geography and experience; the visions of disappointed revolutionaries, unable to recognize the nation that they had fought for; the tensions and connections between personal experience remembered and national memory exalted. ... Few historians know and understand the turbulent, often bloody decades of the mid-nineteenth century in the Mexican southeast as well as Rugeley does. By weaving together context and analysis, he brings forth complexities that have been flattened out by seamless patriotic narratives. His translation is remarkable in that it manages—by, among other things, preserving the costeños’ open-ended words and redolent speech patterns—to re-create, in a foreign language, a holistic sense of time and place (p. xxvii). By bringing historical knowledge, heart, and humor to the specialized, technical exercises of editing and translating, Rugeley reveals the powerful, relevant, fascinating read that was hiding inside a seemingly fuddy-duddy novel." —Hispanic American Historical Review

"This book is a significant contribution to literary history and historical literature. It provides a unique perspective on nineteenth-century Mexican society, politics, and culture. General readers as well as academics in literature and history (particularly) will benefit from the high-quality work undertaken to bring this previously under-appreciated novel to light. It is straightforward and fully accessible to general readers and specialists alike, who will especially appreciate the finely crafted and highly intelligent introduction." —Andrew Wood, Rutland Professor of History/History of the Americas, University of Tulsa

"This is one of the most comprehensively edited translations of a Mexican novel of any period. It is meticulously annotated with a specialist, interdisciplinary introduction and more than 260 notes explaining and unpacking the history, culture, and language of the text. These notes, which demonstrate Terry Rugeley’s uncommon general scholarship as well as his specialist knowledge, are education and entertainment in and of themselves. Its presentation of a readable novel and the cultural history it contains, at times highly specialized, will appeal to scholars of both Mexican history and Latin American letters. Its quality, brevity, strong sense of place, and value as an optic onto key processes in nineteenth-century history will also appeal to an advanced undergraduate readership, for whom it might fill something of the role of a much better-known novel, Mariano Azuela’s The Underdogs. I would even consider assigning it in survey courses as a nuanced treatment of colonialism." —Paul Gillingham, Associate Professor of History, Northwestern University

Manuel Sánchez Mármol worked as the personal secretary to Colonel Gregorio Méndez Magaña, obtained a law degree, and and went on to occupy a variety of state government positions, eventually rising to become a federal congressman. Even with his busy political career, Manuel Sánchez Mármol found time to do what educated gentlemen did: indulge his passion for literature. Together with a handful of leading Yucatecan intellectuals, he published a satirical newspaper (La burla), and on his own, the pro-Liberal El águila azteca (1862) in Tabasco. Sánchez Mármol also authored four other novels—El brindis de la Navidad, Pocahontas, Juanita Souza, and Previvida—together with a monograph on Mexican education, Las letras patrias.

About the translator and editor

Terry Rugeley is a retired Professor of Mexican and Latin American History at the University of Oklahoma, where he taught for twenty-four years. His long list of studies include Of Wonders and Wise Men: Religion and Popular Cultures in Southeast Mexico, 1800–1876 (2001) and The River People in Flood Time: The Civil Wars in Tabasco, Spoiler of Empires (2014). An accomplished translator, he has also published numerous book-length works from both Spanish and German. He has been awarded a Fulbright-Hayes fellowship, an American Philosophical Society grant, the Best Book award (2003) of the Southwest Council of Latin American Studies, and Honorable Mention for Best Book (2010) of the Pacific Chapter of the American Historical Association.