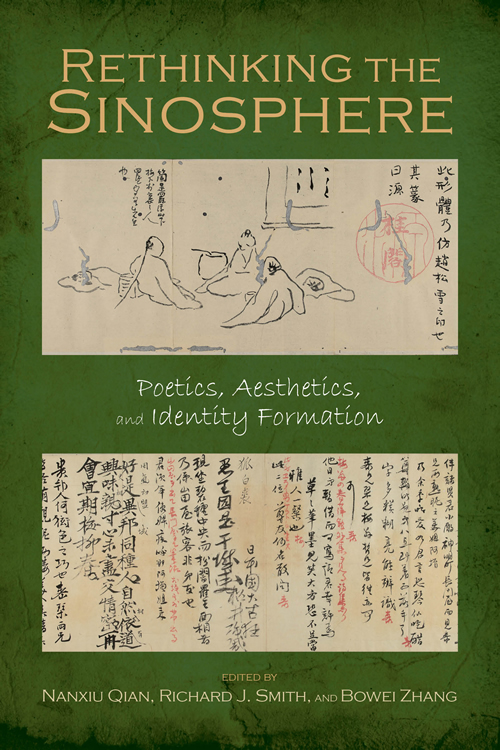 "Rethinking the Sinosphere signifies a landmark in the study of cultural interaction in East Asia ... it is a most important source for anyone interested in East Asian studies." —Chun-chieh Huang, Distinguished Chair Professor, National Taiwan University

This book is part of the Cambria Sinophone World Series, headed by Professor Victor H. Mair (University of Pennsylvania).

For hundreds of years, into the twentieth century, the culture groups in the areas we now know as China, Japan, Korea, and Vietnam shared a great many political and social values, religious beliefs, and artistic and literary traditions. These common cultural features were recorded and transmitted in the same basic written language—classical or literary Chinese (known as guwen/wenyan in China, Kanbun in Japan, Hanmun in Korea, and Hánvan in Vietnam). The umbrella term for this shared language is “literary Sinitic”—a term designed to recognize the fact that although guwen/wenyan originally developed in China, it had a vibrant life of its own in other areas of East Asia (i.e., what this study terms the Sinosphere).

This huge but understudied body of written documents offers extraordinarily rich resources for examining issues of cultural continuity and change in this important region of the world. Unfortunately, in the aftermath of the political and social turmoil in East Asia during the late nineteenth and early twentieth centuries, all four cultures abandoned their use of literary Sinitic. As a result, a great many documents written in this important script have been ignored, leaving a substantial gap in our understanding of the relationship between the histories and cultures of premodern East Asia. Like its companion volume, Reexamining the Sinosphere: Transmissions and Transformations in East Asia, this book seeks to fill this gap.

One of the primary goals of this study is to break down the intellectual and cultural barriers that have made the Sinosphere difficult to see for itself. These barriers are of two sorts. One is the academic tendency toward intense specialization; most scholars of East Asia focus on a single country, a well-defined period, and an equally well-defined discipline (linguistics, philosophy, history, literature, art, etc.). Another is the tendency of scholars to privilege the country and period they study, and to adhere closely to their disciplinary training and outlook. To break down these barriers, a group of highly accomplished scholars committed to cross-cultural comparisons and interdisciplinary perspectives have been selected for this volume, and the result is a careful and critical examination of the complex cultural interactions that took place in premodern East Asia.

Among the many contributions of this study are its examination of different literary genres (including “classics,” poetic primers, works for and about women, detective stories, and folksongs), its broad chronological scope (from the eleventh to the twentieth centuries), its equally extensive spatial range (including China, the Xi Xia Kingdom, Japan, Vietnam, and Korea), and its attention to “minority” cultures. Another distinctive feature of this volume is its exploration of epistemological and culture change in late-nineteenth- and early twentieth-century East Asia

Rethinking the Sinosphere: Poetics, Aesthetics, and Identity Formation will appeal not only to academic specialists in the histories, philosophies, literary and artistic traditions of East Asia, but also to instructors of college-level courses in East Asian history and culture.

* Read the editors' note on the cover art for Rethinking the Sinosphere.

"Rethinking the Sinosphere signifies a landmark in the study of cultural interaction in East Asia in two senses. First, it tells the story that literary Sinitic has served as the platform of personal and historical connections in East Asia. Through several case studies, the book affirms that the Chinese characters are the common dominator of the Sinosphere. Secondly, it is a well-knitted tapestry in which the personal, historical, poetic and aesthetic dimensions of cultural interaction in East Asia interweave with one another. This book is a most important source for anyone interested in East Asian studies." —Chun-chieh Huang, Distinguished Chair Professor, National Taiwan University

“Rethinking the Sinosphere is pioneering research. This book is an excellent and inspiring contribution to the understudied topic of East Asian literature and culture in historical perspective, overcoming the positioning of China at the center of the region. Rejecting the anachronistic center-periphery and nation-state division perspectives, the authors provide ample data for their position and offer a view of writings in literary Sinitic as ‘universal markers of civilization not necessarily particular to China.’ Using a variety of approaches and material, the individual chapters examine the travel of texts and ideas and about their transformation across the space of East Asia, including their local identities and regional commonalities. In addition to its obvious appeal to scholars, this book should be well used by students of the different languages and traditions of East Asia in the study of the Sinosphere.” —Olga Lomová, Professor of Sinology, Charles University

"This volume provides an extremely valuable and multifaceted contribution to our understanding of premodern and even early modern China and its neighbors in their shared regional East Asian context. While the primary audiences doubtlessly are scholars and students of East Asian languages and cultural history, I imagine that the literate public might benefit from reading this as well." —Jeffrey L. Richey, Professor and Chair, Department Asian Studies, Berea College

"It is not good enough to simply acknowledge that the Sinitic cultural repertoire was adapted in diverse ways, however useful it is for putting aside dated assumptions and national biases. The urgency is to make sense of how it was used. The essays in this volume generally offer compelling and distinctive examples in this vein. ... they elicit important questions and highlight the potential for further inquiry." —Journal of Asian Humanities

"Erudite and accessible … based on years of careful research and a clear cross-cultural and transnational vision. Reading them together brings out a wonderfully diverse picture of the multidirectional travels of texts and images, and people and ideas, by means of ‘literary Sinitic’ and throughout the ‘Sinosphere.’ … break[s] new ground in the studies of the ‘Sinosphere’ by problematizing the very concept of ‘literary Sinitic’ and the ‘Sinosphere.’ Regardless of how imperfect these concepts may be as carriers and place-holders of a range of complex, dynamic, and divergent interactions and exchanges, the way they were enacted, interrogated, and wrestled with throughout these two volumes convinced this reviewer that the editors and contributors are making a major contribution to activate and decenter the ‘Sinosphere,’ with a forceful emphasis on the power and creativity of local agents in making ‘literary Sinitic’ their own, and on their own terms." —China Review International

Nanxiu Qian is Professor of Chinese Literature at Rice University. She holds a PhD from Yale University and an MA from Nanjing University. Dr. Qian’s previous publications include Politics, Poetics, and Gender in Late Qing China: Xue Shaohui and the Era of Reform, Spirit and Self in Medieval China: The Shih-shuo hsin-yü and Its Legacy, and several edited and coedited volumes. She has published in both English and Chinese journals such as NAN NÜ: Men, Women and Gender in Early and Imperial China, Modern China, the Journal of Asian Studies, and the Wenxue pinglun.

Richard J. Smith is George and Nancy Rupp Professor of Humanities emeritus, a Baker Institute Scholar, and a Research Professor at the Chao Center for Asian Studies, Rice University. He holds a PhD from the University of California, Davis, and has published nine single-authored books—the most recent of which is The Qing Dynasty and Traditional Chinese Culture. He has also coedited or coauthored six volumes—the most recent of which (coedited with Nanxiu Qian and Grace Fong) is Different Worlds of Discourse: Transformations of Gender and Genre in Late Qing and Early Republican China.

Bowei Zhang is Professor of Chinese Literature at Nanjing University. He holds a PhD, an MA, and a BA from Nanjing University. Dr. Zhang’s publications (all in Chinese) include Guidelines to the Study of Literary Sinitic Texts, Reading the Sinosphere as a Methodology for Studying the Sinosphere, Chan Buddhism and Poetics, A Preliminary Study of the Eastward Transmission of Qing Poetic Remarks, A Study of the Methodology of Classical Chinese Literary Criticism, A Study of Classical Chinese Poetics, and numerous others. He has published in a great many East Asian journals and has been the editor-in-chief of the distinguished Chinese journal Study on Literary Sinitic Texts.

Sonja Arntzen is Professor Emeritus of East Asian Studies at the University of Toronto.

Hong Cao is a Professor of Chinese Literature at Nanjing University.

Matthew Fraleigh is an Associate Professor of East Asian Literature and Culture at Brandeis University.

Lo-fen I is an Associate Professor in the School of Humanities at Nanyang Technological University in Singapore.

Jongmook Lee is a Professor of Korean Language and Literature at Seoul National University.

Michael McCarty is an Assistant Professor of History at Salisbury University.

Ivo Smits is Professor of Arts and Cultures of Japan at Leiden University.

Keith Weller Taylor is Professor of Sino-Vietnamese Studies in the Department of Asian Studies at Cornell University.

A Comparative Chronology of the Sinosphere

Part One: Literary Interactions in the Sinosphere

Chapter 6: Singing the Informal: Priest Renzen, Mudaishi, and a World outside the Classical Court (Ivo Smits)

Chapter 7: The East Asian Cultural Image: A Study on “Eight Views of Xiao Xiang” (Lo-fen I)

Chapter 8: Taking Stock of a Tradition: Early Efforts to Write the History of Sinitic Poetry Expression in Japan (Matthew Fraleigh)