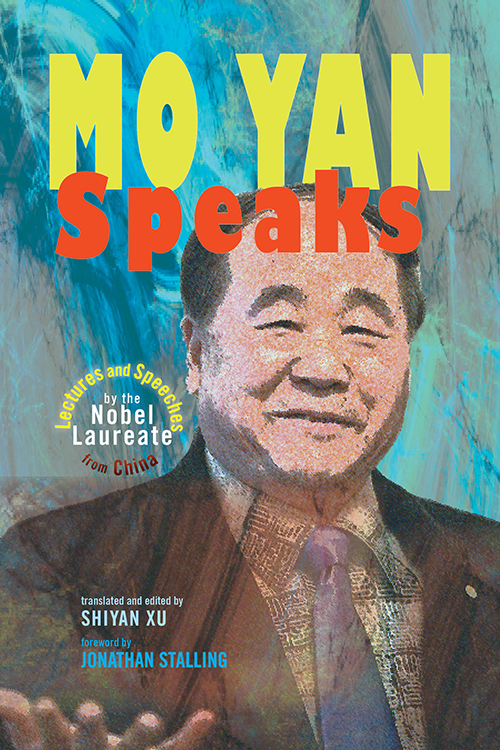 Mo Yan Speaks: Lectures and Speeches by the Nobel Laureate from China by Mo Yan

“To have a Nobel laureate’s take on literature is invaluable—it is all the more the case for Mo Yan, whose name means ‘Don’t Speak’! It is a significant contribution to the literary world that his insights will now be available to English-language readers for the first time in this priceless book, which contains important speeches and lectures by this writer whose impact on world literature continues to grow.” —Professor Jean-Marie Gustave Le Clezio, Nobel Laureate

Nobel laureate Mo Yan, whose name literally means “don’t speak,” is renowned for his fiction, which the Nobel Prize Foundation notes "merges folk tales, history and the contemporary" "with hallucinatory realism." His works include The Garlic Ballads; Red Sorghum; Shifu, You'll Do Anything for a Laugh; Life and Death Are Wearing Me Out; The Republic of Wine; and Big Breasts and Wide Hips (all translated into English by Professor Howard Goldblatt).

Mo Yan’s fiction has captivated a global audience for years, and his lectures and speeches are just as riveting. They provide rare insights into the complex thought processes of one of the most influential writers in the world. Mo Yan’s passion for his work comes across clearly in his lectures and speeches, reinforcing the strong emotions his works evoke in his readers. Many of these speeches have been translated into Japanese and Korean, and they are now finally available in English. From the writers who have influenced him to the relationship between his life and his works, this book—a priceless first-hand account from Mo Yan himself that offers an extraordinary window into his world—deepens not only our appreciation of his works but also the role and importance of literature.

“To have a Nobel laureate’s take on literature is invaluable—it is all the more the case for Mo Yan, whose name means ‘Don’t Speak’! It is a significant contribution to the literary world that his insights will now be available to English-language readers for the first time in this priceless book, which contains important speeches and lectures by this writer whose impact on world literature continues to grow.” —Professor Jean-Marie Gustave Le Clezio, Nobel laureate

"Mo Yan’s public speeches are extremely insightful, not only in respect to his views of written, translated, and read literature but also concerning the role of literature—including its appeal and its limitations—in contemporary society. Mo Yan Speaks enhances our appreciation of his published fiction." —Professor Howard Goldblatt, translator of Mo Yan’s novels and collections; Guggenheim Fellow; and Research Professor, University of Notre Dame

"A truly 'glocal' writer who has one literary foot firmly planted in the soil of his native Gaomi Township and the other tiptoeing into the arena of world literature. They show an author performing a balancing act between his international elite status and the local storytelling tradition present in his work....It is this duality of humble storyteller and Nobel laureate that defines the Mo Yan phenomenon, and it is his playful creation and shaping of this persona that make the speeches in this volume so entertaining...his speeches and lectures are a continuation of Mo Yan’s literary work...The most enjoyable aspects of Mo Yan’s writing are its irreverence, its hyperbole, and its blatant fictionalization of reality, which refuse to be contained by the novel form." —Los Angeles Review of Books

Mo Yan is the Chinese writer and Nobel laureate whose best-selling books include Red Sorghum, The Garlic Ballads, The Republic of Wine, Big Breasts and Wide Hips, Sandalwood Death, Pow!, Life and Death Are Wearing Me Out, and Frog.

Shiyan Xu is Professor of English at Nanjing Normal University and holds a PhD from Nanjing University. She is Deputy Editor-in-Chief for Chinese Arts and Letters, a journal whose aim is to translate works of Chinese literature and introduce them to the English-speaking world. In addition to several journal articles, her previous publications include The “Weather Vane” of Mainstream Theatre: Study of the Pulitzer Plays in the 21st Century. Dr. Xu also translated Eugene O’Neill’s newest biography Eugene O’Neill: A Life in Four Acts (Yale University Press, 2014), which was published in 2018 by Nanjing University Press and won the prestigious Purple Mountain Prize in Literary Translation awarded by the Jiangsu Writers’ Association.

1. The Smell of Fiction

3. The Tradition of Chinese Fiction

4. Writing What You Most Want to Write

7. Mysterious Japan and My Literary Journey

8. The Infinite Merits of Translators

11. The Anxiety of Influence

12. Literature Is the World’s

14. The Mysterious Cow of My Home

18. Reading with My Ears

19. Six Lives in Search of a Character

20. Writing Has Its Own Road

21. Writing as One of the Common People

23. A Modest Proposal on Literary Individuality