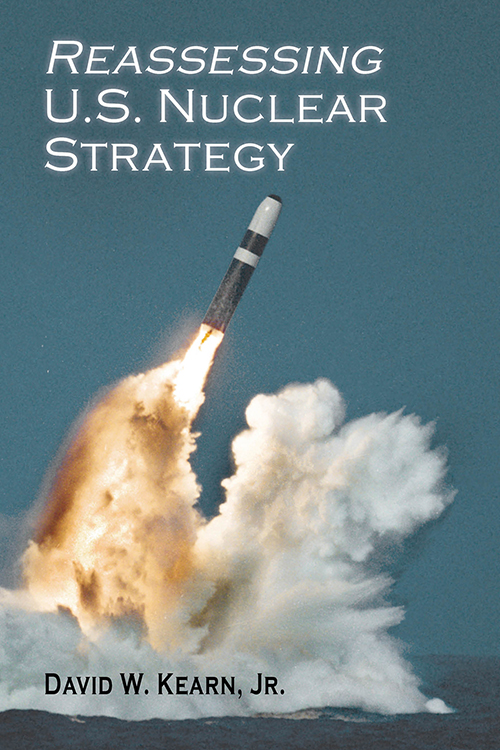 "Kearn offers important insight into what must occur if nuclear deterrence is to remain a cornerstone of U.S. defense policy.” —James J. Wirtz, Dean of the School of International Graduate Studies, Naval Postgraduate School

The United States is currently in the early stages of modernizing its entire nuclear enterprise. The Obama administration, established a program to replace all three legs of the strategic triad over the next three decades: long-range bombers, land-based intercontinental ballistic missiles, and nuclear-powered ballistic missile submarines, as well as the upgrade of an existing gravity bomb and a replacement for the air-launched cruise missile. Nuclear command, control and communications systems and the nuclear weapons laboratory complex and infrastructure are also included in the program. It is estimated that the full strategic modernization program will cost as much as $1.2 trillion over thirty years. The Trump administration largely endorsed this plan, with two additional refinements—the retrofitting of a portion of submarine-launched ballistic missiles with lower-yield warheads and the development of a sea-launched cruise missile—to better address challenges of renewed great power competition.

This book reassesses the nuclear strategy of the United States. Despite the appearance of continuity in official policy statements, views within the Obama and Trump administrations and across the larger defense policy community have diverged on the appropriate role of nuclear weapons in U.S. national security, the optimal nuclear strategy for advancing U.S. interests, force structure requirements, and critical related issues.

This study seeks to answer a vitally important question: what type of strategic arsenal—in terms of quantitative force levels and types of deployed weapons—is necessary to deter adversaries, assure allies, maintain strategic stability, and support strategic arms control and nonproliferation objectives? Moreover, given the nature of technological change, what strategy will effectively serve to hedge against geopolitical risk while also allowing for investment in the research, development, and acquisition of cutting-edge military applications derived from new and emerging technologies? The United States is now at a critical juncture; it must seek to develop an optimal nuclear strategy allows for conventional forces modernization and balances investments in current-versus-future capabilities. To outline an optimal nuclear strategy, this study develops and assesses three ideal type nuclear strategies for the United States and critically analyzes them in the context of geopolitical, technological, proliferation, and budgetary trends, building upon the works of both academic scholars and policy analysts.

Reassessing U.S. Nuclear Strategy is an important book for security and strategic studies and should be of interest to both scholars and practitioners in the field of nuclear weapons policy.

“This well-organized book offers a unique contribution to the field of nuclear strategy and nuclear force posture. In particular, the organization of the book around enduring debates on nuclear weapons as well as alternative nuclear postures is an effective device for presenting the subject. The arguments are fully developed and well presented, and the scholarship is outstanding.” —Thomas G. Mahnken, President and CEO of the Center for Strategic and Budgetary Assessments. (CSBA) and coeditor of The Gathering Pacific Storm: Emerging US-China Strategic Competition in Defense Technological and Industrial Development

“The U.S. nuclear deterrent is at a crossroads. Decisions about modernization loom on the horizon as nuclear-armed missiles, bombers and submarines 'age out' of the arsenal. In this provocative analysis, David Kearn helps set modernization priorities by linking courses of action to different strategic objectives. Reassessing U.S. Nuclear Strategy identifies competing futures for the nuclear deterrent and the implications for doctrine and delivery systems. Kearn offers important insight into what must occur if nuclear deterrence is to remain a cornerstone of U.S. defense policy.” —James J. Wirtz, Dean of the School of International Graduate Studies, Naval Postgraduate School

"The debate about the future of the U.S. nuclear deterrent is usually cluttered with technical details, budget numbers, and a large dose of cold war logic. In this timely new book, David Kearn offers an important remedy. With admirable clarity, he reduces to its essence the central question in U.S. nuclear strategy: whether to seek primacy, to opt for minimum deterrence, or to sustain the legacy commitment to robust strategic deterrence. His analysis of the strengths and weaknesses of each is fresh and engaging, as it is informed by a clear understanding of the current security environment. His conclusions will carry significant weight in the modernization debate." —Brad Roberts, Director of the Center for Global Security Research, Lawrence Livermore National Laboratory

"Nuclear weapons are back, and Kearn gives us a clear guide to the bitter and complex debates about American policy toward them. Any reader of this comprehensive and fair-minded account will be in a better position to understand the issues and alternatives." —Robert Jervis, Adlai E. Stevenson Professor of International Politics, Columbia University; and author of How Statesmen Think

David W. Kearn, Jr. is an Associate Professor in the Department of Government & Politics at St. John’s University in Queens, New York. During the 2016-2017 academic year, he served as Strategic Advisor for Countering Weapons of Mass Destruction (CWMD) in the Office of the Secretary of Defense-Policy, with support from an International Affairs Fellowship (IAF) in Nuclear Security from the Council on Foreign Relations and the Frank Stanton Foundation. His research and teaching interests include international relations theory, U.S. foreign policy, military innovation, deterrence and nuclear strategy, and nonproliferation and arms control. His previous book publications include Great Power Security Cooperation: Arms Control and the Challenge of Technological Change (2014) and Facing the Missile Challenge: U.S. Strategy and the Future of the INF Treaty, which was published by the RAND Corporation in 2012 after he concluded a year-long Stanton Nuclear Security Fellowship in RAND’s Washington, DC office. Dr. Kearn received his B.A. from Amherst College, a Master of Public Policy (MPP) from the John F. Kennedy School of Government at Harvard University, and a PhD in Foreign Affairs from the University of Virginia.