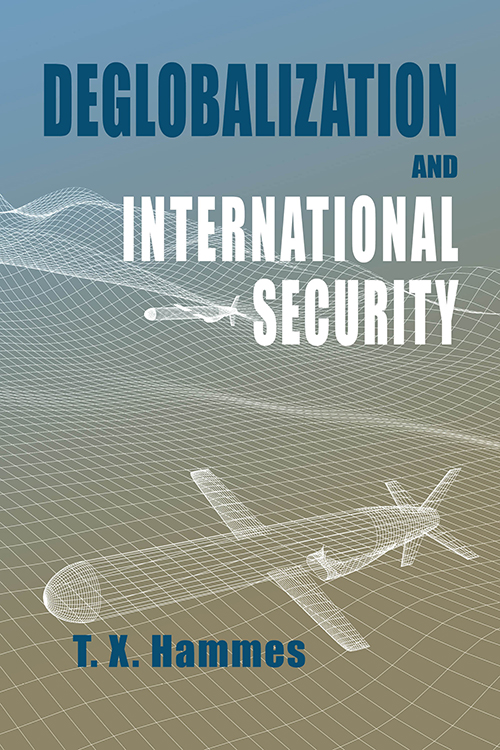 "Provides an often sobering look at the changes the world is experiencing and the challenges it presents to both military and civil readers. Tying in rapid economic change to larger picture strategic considerations, this work is a good read for academics as well as those in leadership roles in the armed services or industry." —Naval Institute Proceedings

Read the author interview about the book.

The fourth industrial revolution will also create a new generation of small, smart, and cheap weapons that will challenge the military dominance of the United States in every domain. These weapons will give small states and even non-state actors capabilities that used to be the preserve of major powers.

These two trends—deglobalization and the evolution of cheap, smart weapons—will fundamentally alter world economic and security orders. The return of production and services to the United States will reduce the interest of the American people in maintaining stability in the international system. Reinforcing this trend, resultant employment disruptions, the oncoming U.S. debt and budget crises will force national leaders to choose whether to allocate resources to domestic, particularly entitlement, spending or to overseas efforts. Even more important, the new generation of weapons will dramatically increase the cost in blood and treasure of U.S. military engagements.

In sum, the fourth industrial revolution will see major shifts in economic and military conditions facing the United States. Fortunately, the United States is very well positioned to exploit this opportunity to greatly improve both its economy and defense.

Deglobalization and International Security illuminates how the fourth industrial revolution will fundamentally alter global economic and security arrangements and offers options that allow U.S. leaders to exploit the fourth industrial revolution to provide economic and military security for the nation. It provides important insights for a range of fields from strategy to trade to defense.

This is an important book for those in political science, international relations, and conflict and security studies. The primary audiences for this book are academics, practitioners of the policy community, military personnel, and defense department professionals. Both the entire book and specific chapters will be suitable for undergraduate and graduate education in the national security field.

"TX Hammes brings together the fields of international political economy and security studies in a way that makes important contributions to both areas. ... Published as part of the Cambria Rapid Communications in Conflict and Security series, this work clearly meets the editor’s goal of “providing policy makers, practitioners, analysts, and academics with in-depth analysis of fast-moving topics that require urgent yet informed debate. ... Hammes leverages his extensive academic work and impressive military experience to present a thought-provoking glimpse into the long look ahead.” —Strategy Bridge

"This book is a fascinating contribution to the discussion on future warfare, and one that would appeal to Defense Advanced Research Projects Agency scientists and World Bank economists alike. ... The intellectual curiosity and astute observations covering science, technology, economics, history, politics, and military strategy packed into the book make it a compelling and thoughtful read. Although replete with some fairly pessimistic assessments of such future wars—they are, Hammes argues, likely to be “bloodier, longer, and more financially ruinous” than those of today—the final chapter constructively navigates a path for American forces to follow in order to adapt to such changes (195). Hammes bluntly lays out the inescapable impact new technologies will have on force structure and raises important questions for military planners regarding shifts in investment from legacy systems to new ones. ... Overall, Hammes’ assessment of the economic drivers of current and future change is convincing." —Parameters

"Provides an often sobering look at the changes the world is experiencing and the challenges it presents to both military and civil readers. Tying in rapid economic change to larger picture strategic considerations, this work is a good read for academics as well as those in leadership roles in the armed services or industry." —Naval Institute Proceedings

"T.X. Hammes has written a thought-provoking book about the revolutionary impact that advancements in science and new weapons of war will have on societies, the world order, and the United States. His ideas about a Fourth Industrial Revolution and the 'deglobalization' it will spur should be considered and debated by security professionals the world over—particularly those in the U.S. defense establishment. Highly recommended!" —Robert O. Work, former Deputy Secretary of Defense

“Blending his usual provocative thinking with penetrating insights into future technological developments, Dr. Hammes offers a perceptive look into our future. The implications of this assessment are both lucidly presented and profound. Deglobalization and International Security will surely prove invaluable to Congress and the defense policy community.” —F. G. Hoffman, Ph.D., Foreign Policy Research Institute

“This is a remarkable book. Timely, extensively researched, and wide ranging, it addresses interacting challenges that will have profound economic, political and security implications. Not only are these already happening faster than many realize, but they are accelerating. Dr. Hammes raises important questions about current and planned U.S. force structure, the rising costs of intervention, and the changing character of war. I recommend it highly. ” — Linton Wells II, Visiting Distinguished Research Fellow, National Defense University

T. X. Hammes is a Distinguished Research Fellow at the National Defense University. He holds a DPhil in Modern History, from Oxford University, a Masters in Historical Research from Oxford, and a BS from the U. S. Naval Academy. Dr. Hammes has published two previous books and over 160 articles in a wide variety of venues. He has lectured at conferences, war, and staff colleges in the U.S., Europe, and Asia. During his thirty years in the Marine Corps, he commanded an intelligence battalion, an infantry battalion, and the Chemical Biological Incident Response Force. He participated in stability operations in Iraq and Somalia and trained insurgents in various locations.