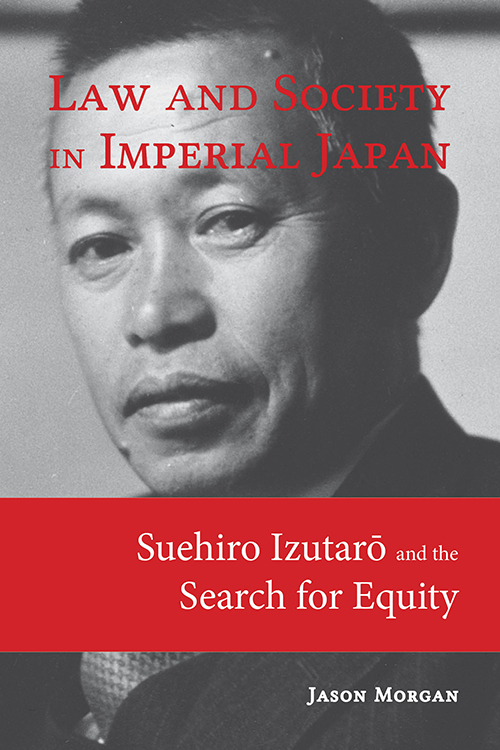 Law and Society in Imperial Japan: Suehiro Izutaro and the Search for Equity by Jason Morgan

"A first-rate scholarly work that is an important contribution to understanding Japan's legal and wartime history. Built on primary sources in Japanese and other languages, the bibliography is exhaustive and will be valuable in itself as a guide to the field. There is much to learn from this book, including important lessons about the nature of wartime Japanese society and politics." — Kevin M. Doak, Georgetown University

Japan emerged from the Edo Period (1600-1868) with a legal system which, in many ways, tended to privilege situational judgment over strict adherence to universally-applicable legal codes. Under pressure from without and within to “modernize,” Japan adopted many Western laws and jurisprudential practices which were largely alien to Japanese society. At the same time, Japan took on Western modes of political participation which tended to exacerbate more than solve the social ills attendant on industrialization and modernity. Suehiro Izutaro, a legal scholar at the University of Tokyo, and a group of likeminded professors and activists attempted to ameliorate Japanese social problems through a case law method, making the courts more responsive to the poor through the application of a native form of Japanese equity from the Edo Period. However, as Japan’s regional reach expanded and the world situation darkened, the prerogatives of empire cut short Suehiro’s social experiments and eventually co-opted even Suehiro himself in imperial logic.

Japanese law is often approach comparatively, but in this study the inner workings of law in Japan—jurisprudentially as well as philosophically and politically—are given priority. By foregrounding case studies and other primary sources in Japanese, Equity under Empire shows how Japan, and the Japanese legal-political system, changed from the inside. Following the career of one of the twentieth century’s most prominent legal minds, Equity under Empire maps the intellectual and historical twists and turns that set Japan on a course far removed from Edo equity, grappling with the internal contradictions of imperialism as she moved beyond the archipelago in a struggle with Anglo-European powers in Asia and the Pacific. This is a from-the-inside look at the life of the law in Japan from the closing years of Edo through the first half of the twentieth century.

Equity under Empire is an important book for collections on East Asian history and law, and on law and legal philosophy in general.

"A first-rate scholarly work that is an important contribution to understanding Japan's legal and wartime history, especially the nature of tenko (ideological conversion during wartime Japan). Not only is this book the first serious study of Suehiro Izutaro in English, but it is also a profound analysis of the the development of law (labor law espcially) in Imperial Japan, and more broadly the impact of Suehiro’s case-study approach on Japanese law today. Built on primary sources in Japanese and other languages, the bibliography is exhaustive and will be valuable in itself as a guide to the field. There is much to learn from this book, including important lessons about the nature of wartime Japanese society and politics." — Kevin M. Doak, Professor and Nippon Foundation Endowed Chair; and Chair, East Asian Languages and Cultures, Georgetown University

Chapter 1. From Ooka Tadasuke to Hozumi Yatsuka: The Emergence of a Legal Crisis in Japan

Chapter 2. Suehiro Izutaro and the Founding of the Law-and-Society Movement in Japan

Chapter 3. The Caselaw Study Group: The Law-and-Society Movement in Theory and Practice

Chapter 4. Settlement Houses and the Law-and-Society Movement after the Great Kanto Earthquake