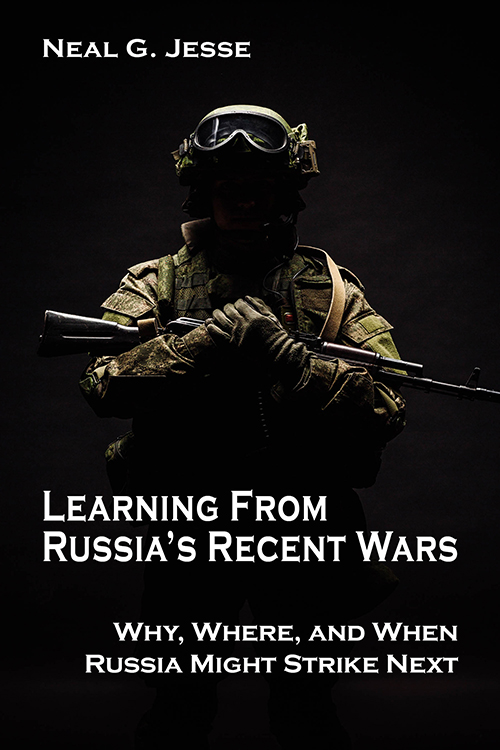 Learning from Russia’s Recent Wars: Why, Where, and When Russia Might Strike Next by Neal G. Jesse

"Solidly based on cutting-edge research in Russian politics and international relations theory, Jesse’s study also contributes to these fields, while not becoming overly theory-centric. A must read for anyone seeking to understand Russia’s past with an eye to the future." —Christopher Marsh, Director, Center for Strategic Research, Joint Special Operations University

With the consolidation of the Russian state under the rule of Vladimir Putin, Russia has begun to assert itself on the international stage to a degree that has not been seen since the end of the Soviet Union. In particular, Russia has engaged in a number of aggressive actions against its neighbors (e.g., Georgia, Ukraine) while also re-asserting its interests in Eastern Europe, the Middle East, Central Asia, and more generally in global forums. Chief among this new assertiveness is the development of non-conventional assets of propaganda, information technology, communications, space-based assets, and cyber technology.

While many have discussed the rise of asymmetrical warfare, Russian foreign policy, and Russia’s post-Soviet wars, what makes this book unique is how it puts these discussions together into a cogent analysis of contemporary Russian foreign policy alongside current international relations theories. This study examines Russia’s recent wars in the Caucasus and Eastern Europe and outlines the focus of Russian assertiveness in key regions central to their security interests. Further, it elucidates the threat that Russian conventional and unconventional warfare poses to populations in Eastern Europe, Central Asia, and elsewhere. In addition, the book highlights the propensity of Russian military thinkers to see a blurring of the line between peace and war, and how Russian capabilities are being used to take advantage of this blurred line.

In the book’s conclusion, prescriptions are made as to how the Western powers, and especially the United States, can attempt to blunt Russian aggression, particularly against NATO nations. Among these prescriptions is that the West must rebut the current Russian information and propaganda campaigns in Europe and elsewhere. Further, the West must recognize the increased Russian flexibility to respond to unexpected and spontaneous events in nations around the globe with the development of its information, cyber, and propaganda assets. The conclusion asserts that defense of key Western allies such as the Baltic Republics requires not only a conventional presence (such as NATO forces) but also the development and deployment of asymmetrical assets to counter the Russian capabilities.

"Given Moscow’s military adventurism over the past several years, the question on everyone’s mind is where will Russia strike next? In seeking to answer this critical question, Jesse surveys Russia’s foreign interventions since the collapse of the Soviet Union, from Transnistria, Nagorno-Karabakh, and Chechnya under Yeltsin to Chechnya, Georgia, and Ukraine under Putin. Along the way his pointed analysis covers such pressing issues as the Kremlin’s fear of so-called “color revolutions”, Russia’s employment of unconventional warfare, and the nation’s natural inclination toward great power status. Solidly based on cutting-edge research in Russian politics and international relations theory, Jesse’s study also contributes to these fields, while not becoming overly theory-centric. A must read for anyone seeking to understand Russia’s past with an eye to the future." —Christopher Marsh, Director, Center for Strategic Research, Joint Special Operations University

“Professor Jesse’s tour d’horizon of Russian interventions around its periphery over the last 30 years firmly demonstrates two vital points. First, that military adventurism by Russia did not begin with Ukraine in 2014 and will not end there. And second, that the standard International Relations teachings are worse than useless for attempting to describe the behaviour of a state guided by its national interest rather than by academic theory.” —Keir Giles, Senior Consulting Fellow, Russia and Eurasia Programme, Chatham House

Neal G. Jesse is a professor of political science at Bowling Green State University. He holds a PhD from UCLA and a BA from UCSB. Dr. Jesse’s previous publications include Small States in the International System: At Peace and at War, Ethnic Conflict: A Systematic Approach to Cases of Conflict, Beyond Great Powers and Hegemons: Why Secondary States Support, Follow, or Challenge, and Identity and Institutions: Conflict Reduction in Divided Societies. He has published articles in several journals such as International Political Science Review, International Studies Quarterly, Political Psychology, and Electoral Studies.

Chapter 3. Russia's Efforts To Rebuild Its Armed Forces For The Future

Chapter 6. The Continuing Russian Threat To The Baltic Nations And Eastern Europe

Chapter 7. Russian Actions in Central Asia and the Middle East