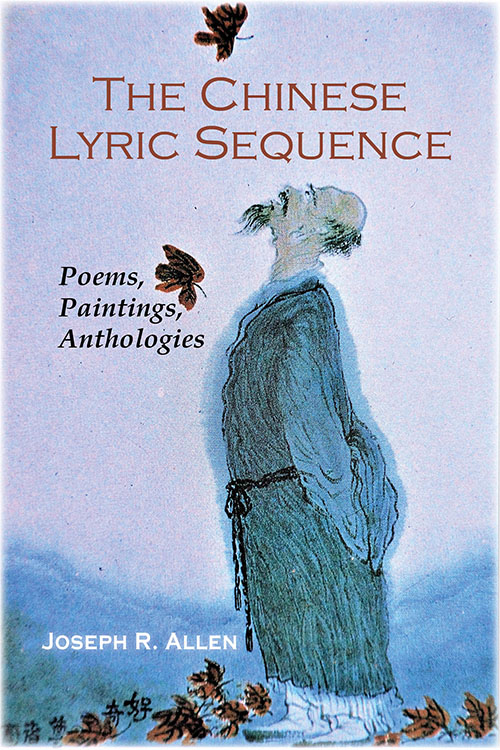 "As the first book-length study of this topic, Allen’s work is certainly groundbreaking… Allen’s insights give readers a new way to look at poetic sequences, encouraging new perspectives on poetry far beyond the range of examples he addresses in this book… Though centered on medieval poetry, the expanded scope of the opening and closing will surely encourage readers of poetry from other eras to revisit and reconsider even more examples of poetic sequences from throughout literary history. This invitation to seek out new ways of reading poetic sequences is a welcome one, making Allen’s book a very valuable contribution to the study of Chinese poetry." —CLEAR

Classical Chinese poetry is the dominating lyric form of world literature. Mainstream shi (lyric poetry) is a genre spanning more than two millennia, with poems numbering in the hundreds of thousands—extant shi from the medieval Tang dynasty alone consists of 48,000 poems by 2,200 authors. In these thousands of poems are some of the world’s more enduring examples of the short occasional poem, inspiring readers and writers across the globe with its vivid language of perspicuity. And embedded within that great lyric tradition, from its very beginnings to contemporary times, is the subtle but unsung form of the sequence of poems. Along with its related meta-forms of the literary anthology and album of paintings, this forms the Chinese lyric sequence.

The Chinese lyric sequence was never named or even noticed, by the poets, painters, or anthologists who worked in the genre over the millennia. It was an invisible but powerful form; in fact, Professor Joseph Allen argues that its power was lies in its invisible hold on the artists. Although the works discussed are some of the most canonical in the tradition, this is the first time that close attention and detailed analysis has been brought to the Chinese lyric sequence, both in its specific manifestations and as a shared aesthetic form. In doing so, Allen provides a focused introduction to Chinese literature and art for the general reader, while offering new insights for the specialist.

The works discussed include liturgical hymns, risqué folk songs, religious poems cast in dramatic forms, sensuous songs of the seasons, dense ponderings of personal travail, intimate landscape and figural paintings, and important collections that give them form. Despite the diversity of these works, Allen offers an abiding rationale for understanding all of them in the rubric of the Chinese lyric sequence, providing an original protocol for reading. This interpretation derives from deep Chinese cultural norms, such as parallel structures, significant numbers, and the interweaving of modes of understanding, but each example offers its special manifestation of those norms.

Allen places the genre in a comparative perspective with both Japanese and Western models, using theoretical language derived from the Chinese lyric tradition itself. All poems are provided in original and translation, with extensive contextual notes and detailed readings. Examples of paintings are provided, including one complete album.

This book is a valuable resource for scholars and students in Asian studies, comparative literature, and Chinese literature.

"As the first book-length study of this topic, Allen’s work is certainly groundbreaking… Allen’s insights give readers a new way to look at poetic sequences, encouraging new perspectives on poetry far beyond the range of examples he addresses in this book… Though centered on medieval poetry, the expanded scope of the opening and closing will surely encourage readers of poetry from other eras to revisit and reconsider even more examples of poetic sequences from throughout literary history. This invitation to seek out new ways of reading poetic sequences is a welcome one, making Allen’s book a very valuable contribution to the study of Chinese poetry." —CLEAR

“This book is the first attempt to discuss, in both theoretical and concrete terms, the historical development of an important but decidedly understudied Chinese literary form, the poetic sequence (zushi). The poetic sequence is an important form in the Chinese tradition, as it allows the poet to build a complex argument in poetic form about an issue, an experience, or a phenomenon in life. This book is the first English-language monograph to discuss the poetic sequence in the context of the historical development of this art form as a whole, and the connection made between the poetic sequence and album leaves is thought-provoking. Each chapter contains many inspired and inspiring analyses of individual texts. The writing is lucid and accessible, and the book is a great pleasure to read from beginning to end. This book will be invaluable for both specialists in the field of Chinese literature and general readers who are interested in Chinese poetry and aesthetics; it will be essential reading for scholars and students in classical Chinese literature, cultural history, and art history.” —Tian Xiaofei, Professor of Chinese Literature, Harvard University

“One of the great divides in Chinese literary scholarship is what constitutes ‘theory.’ If one is working on modern literature exclusively, there is a tendency to borrow and apply Western theories wholesale, not least because of the extensive influence of the West on China after the First Opium War. There is also the issue of identifying and reading Chinese works of theory, which are not constituted as they are in the West, usually affiliated with reading specific texts rather than generalizations of abstractions. Professor Allen takes up the issues of lyric sequence from the Chinese perspective, rather than imposing the norms of the Indo-European traditions upon it. As he does this, he uses language and explanations that non-specialists can understand. Professor Allen gives us a sweeping experience of lyric sequences and their strategies from the very beginning of the Chinese tradition to the present day. He has made a breakthrough in the field of poetry as it relates to painting studies and has recharged our sense of the visuality of Chinese poetry. This is certainly carried through in his analyses.” —Dore J. Levy, Professor of Comparative Literature and East Asian Studies, Brown University

Joseph R. Allen is Professor Emeritus of Chinese Literature and Cultural Studies at the University of Minnesota and Visiting Professor of East Asian Languages and Cultures at the Washington University in St Louis. Dr. Allen's previous publications include Taipei: City of Displacements (University of Washington Press, 2012), which won the prestigious Association of Asian Studies Levenson Book Prize in 2014, Forbidden Games and Video Poems: The Poetry of Yang Mu and Lo Ch'ing and In the Voice of Others: Chinese Music Bureau Poetry.

Chapter 1: The Chinese Lyric Sequence in a Comparative Perspective

Chapter 2: Decades in The Book of Songs

Chapter 3: Nines in The Elegies of Chu

Chapter 4: Selections and Collections in the Six Dynasties

Chapter 5: The Four Seasons and the Twelve Months