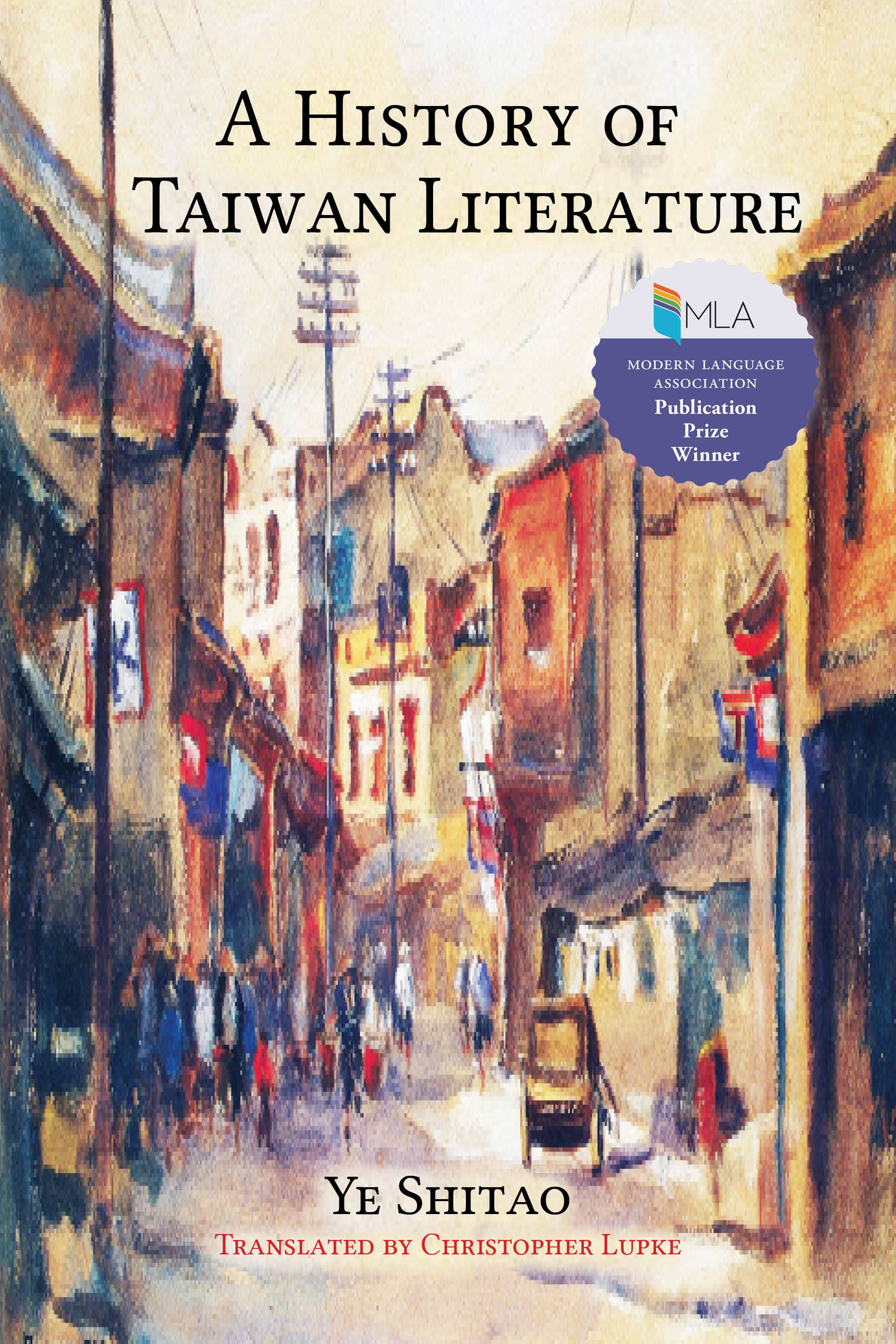 A History of Taiwan Literature by Ye Shitao; translated by Christopher Lupke

"Ye Shitao’s A History of Taiwan Literature is a seminal work in establishing the field of Taiwanese literature and literary history in its own right. Although it is an outline of the history of Taiwanese literature, the study has an impressive scope, introducing English-speaking readers to the complexities of the literary field and discussing single authors, as well as literary societies, magazines, and cultural trends as they come together to create a national literature. Christopher Lupke’s masterful and fluid translation gives the reader the full flavor of the rhetoric and style of the original. The volume also includes extensive Japanese-language notes that, together with the introduction, ensure a better understanding of the significance of Ye Shitao’s book." —MLA Committee

A History of Taiwan Literature by Ye Shitao, an important public intellectual in Taiwan, was published in the crucial watershed year of 1987 when the end of martial law on the island was signaled. Ye’s work was clearly a product of that period and would have been less restrained, considering the fact that the rule book on public expression had yet to be written, if it had been written later. The book is a rigorous, comprehensive treatment; it goes to great lengths to devote attention to all major writers in the history of Taiwan as well as many who were not as prominent. Ye has been fair and evenhanded in the writing of his literary history of Taiwan; there is little, if any, tendentiousness in the book. This is arguably one of the most important intellectual works of literary history, made even more impressive by Ye’s inclusion of copious notes, including Japanese-language ones.

In this translation, Christopher Lupke has painstakingly translated both Ye’s main text and notes, making this valuable resource available to English readers for the first time. Lupke also provides an introduction that contextualizes Ye’s work as well as an epilogue that outlines some of the major historical and literary developments after 1987, along with a brief mention of some of the most important literary figures of Taiwan. In addition to a glossary and index, Lupke offers a select bibliography that lists works that Ye referenced in his own notes as well as some books that Lupke consulted in completing this translation.

A History of Taiwan Literature is a most important resource for those interested in the intellectual history of East Asia, world literature, and Taiwan studies.

"Ye Shitao’s A History of Taiwan Literature is a seminal work in establishing the field of Taiwanese literature and literary history in its own right. Although it is an outline of the history of Taiwanese literature, the study has an impressive scope, introducing English-speaking readers to the complexities of the literary field and discussing single authors, as well as literary societies, magazines, and cultural trends as they come together to create a national literature. Christopher Lupke’s masterful and fluid translation gives the reader the full flavor of the rhetoric and style of the original. The volume also includes extensive Japanese-language notes that, together with the introduction, ensure a better understanding of the significance of Ye Shitao’s book." —MLA Committee

"The significance of Ye’s A History of Taiwan Literature is at least twofold—its slight pre-emption, in terms of its publication time, of martial law and its Taiwan-oriented perspective.… Given the importance of Ye’s book, Lupke deserves extra credit for bringing it to an English readership with his clear, faithful, and fluent rendering. He is far more than just a translator, being more a translator-cum-scholar of Taiwanese literature. … With its extensive coverage of writers, literary societies, and journal titles, translating this book must have been challenging. For many terms, Lupke’s translation will likely be the first one available in English. His meticulous introduction and footnoting, which could be termed 'thick' translation (if we tweak Geertz’s 'thick description' slightly), are valuable for readers of the book and researchers in Taiwanese literature alike.… the glossary, along with Lupke’s translation of the extensive notes from the Japanese translation of Ye’s book, should be particularly useful. The Epilogue prepared by Lupke, which succinctly recapitulates the development of Taiwanese literature after the publication of Ye’s book, functions like an 8th chapter of Ye’s 7-chapter book. This structurally coherent addition not only makes Ye’s book much more relevant to us nowadays, it also aptly highlights two special characteristics—thematization of gender and eco-writing—of contemporary Taiwanese literature." —Taiwan Lit

“Ye Shitao (1925-2008), a pioneering writer and historian, specialized in the literary history of Taiwan and the lives of ordinary Taiwanese people. A History of Taiwan Literature is his most important work that conveys the uniqueness of Taiwanese culture, ethnicity, and historical experience in contrast to mainland China. In this masterful translation of Ye Shitao’s opus, which won the 2021 MLA Aldo and Jeanne Scaglione Prize for a translation of a scholarly study of literature, Christopher Lupke allows readers to gain insight into the evolution of Taiwan literature throughout centuries of colonization and subjugation by foreign powers. He highlights the crucial link between literature and ‘a new consciousness that reflects an awareness of the historical legacy' of Taiwan (12). Framed by Lupke’s incisive introduction and epilogue, this book presents a rigorous, comprehensive treatment of Taiwan’s literary history in a fair and even-handed way. It devotes attention to major and minor writers whose accomplishments were ignored for decades since there was a virtual denial or ignorance of their literary worth. The work foregrounds Ye Shitao’s outlook as a ‘doubly marginalized’ (4) bentu (of this land) writer of southern Taiwan who advocated an understanding of Taiwanese culture and literature as separate from mainland China. Due to Lupke’s inclusion of extensive notes for each chapter, both by Ye Shitao and two Japanese scholars, as well as a rich bibliography and a helpful index, this work is a valuable resource for anyone interested in learning about the historical events, authors, literary journals, and texts that lie at the core of Taiwan’s literary heritage.” — Rocky Mountain Review

"This translation of Ye Shitao’s Taiwan wenxue shigang will challenge readers in productive ways. Few will be able to digest in one reading all of the information it offers on four centuries of writing in Taiwan.… Readers who want to make the most of this sea of information can use the extensive index and may also benefit from owning a searchable electronic version of the book.… Beyond the wealth of information it provides on individual writers and their works, it is this strong voice that makes Ye’s History so rewarding, and I expect that I will return to it many times in my research and teaching." —CLEAR

Ye Shitao is revered as a leader of the localist Taiwanese literary movement and an outspoken critic of martial law and the persecution of intellectuals. He engaged in the famous “nativist literature” debate of the 1970s and helped nurture the careers of countless authors of younger generations. In his history of Taiwan literature, however, Ye strives to adopt a fair and dispassionate tone toward all, ensuring that writers of all camps are represented in it. It is not the work of an academic but of someone immersed in the literary world of Taiwan who knows the milieu as well as anyone and better than most. Ye Shitao passed away in 2008.

Christopher Lupke is Professor and Chair of East Asian Studies at the University of Alberta. Prior to this appointment, Dr. Lupke was Professor of Chinese and Cinema Studies at Washington State University where he coordinated the program for Asian languages for sixteen years and chaired the Center for the Humanities Planning Group. A specialist in modern Chinese culture, Lupke was trained in philosophy at Grinnell College, where he received his BA, in classical Chinese at the University of Wisconsin, Madison, where he received his MA, and in classical and modern Chinese as well as cultural theory and film at Cornell University, obtaining his PhD in 1993. In addition to being the author of the highly acclaimed The Sinophone Cinema of Hou Hsiao-hsien, Lupke has edited two books, The Magnitude of Ming: Command, Life and Fate in Chinese Culture (University of Hawai'i Press, 2005) and New Perspectives on Contemporary Chinese Poetry (Palgrave Macmillan, 2008), and edited or coedited five special-theme issues of journals. He also translates. His publications have appeared in boundary 2, Comparative Literature Studies, positions: east asia critique, Modern Chinese Literature and Culture, Journal of Asian Studies, Asian Cinema, Senses of Cinema, Journal of Modern Literature in Chinese, Asymptote, Michigan Quarterly Review, New England Quarterly, Epiphany, Eleven Eleven, Free Verse, Five Points, and several other journals and edited volumes.

Chapter 2: The Advent of the Taiwan New Literature Movement

Chapter 3: Taiwan Literature in the 1940s—Those Who Sowed in Tears Shall Reap With Shouts of Joy!

Chapter 4: Taiwan Literature of the 1950s—The Frustrations and Decline of Idealism

Chapter 5: Taiwan Literature of the 1960s—Rootlessness and Exile

Chapter 6: Taiwan Literature in the 1970s: Regionalism or Human Nature?