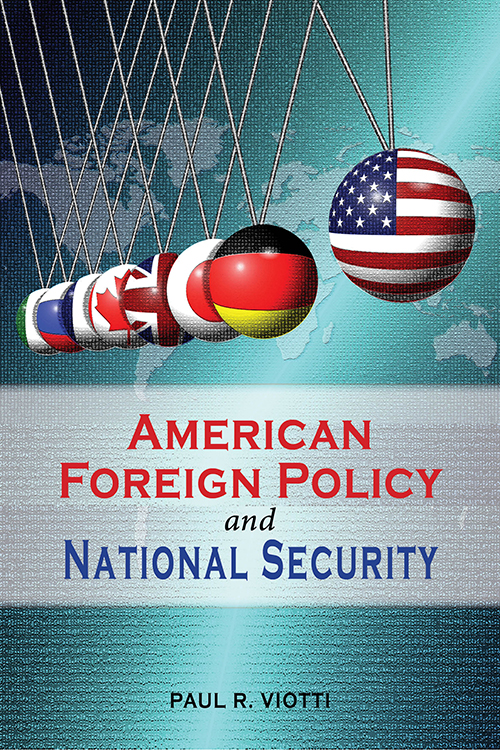 "With his new volume, Professor Paul Viotti has made an important contribution to the study of national security and the decision making process that underpins it." —Amb. Christopher R. Hill, former Assistant Secretary of State for East Asia and Pacific Affairs and former US Ambassador to Iraq, South Korea, Poland, Macedonia, and Albania

This book seeks explanation for the making and implementation of American foreign policy—the decisions and actions the United States takes vis-à-vis state and non-state actors abroad. The latter includes international (IOs) and non-governmental organizations (NGOs), other groups and, in some cases, powerful individuals.

In this effort we are drawn to the decisionmakers themselves. Although precise or point predictions are elusive, deeper understandings of how policymakers tend to operate in the processes of making and implementing foreign policy can lead to greater accuracy in the practical expectations we develop for what may happen.

Rather than presenting a theory of foreign policy, this study identifies factors or essential elements that likely would be part of such a theory. These structural and ideational factors (both domestic and international) influence the choices policymakers make—the ways and means by which they make and implement American foreign policy.

The book focuses on the nationalist or internationalist orientations of decisionmakers that affect the way they see the US role in making and implementing foreign policy. In this regard, nationalists are domestically focused and tend to deemphasize international involvement, minimizing to the extent possible government actions abroad. By contrast, I also identify three kinds of internationalist orientation—liberal, conservative, and militant. Broadly speaking, the range or spectrum of foreign policy options includes (1) diplomacy and other forms of peaceful or constructive engagement not just with allies, coalition partners and other friendly countries, but also vis-à-vis adversaries; (2) containment of adversaries—deterrence, coercive diplomacy, and other negative measures short of war; and (3) armed intervention or warfare with adversaries.

Divided into three parts, Part 1 examines peaceful engagement, containment, and armed intervention. Part Two takes a look back on the American experience since the 18th century. Part Three explores how domestic politics affect the making and implementation of American foreign policy—dubbed politics on the Potomac River where the executive, legislative, and judicial branches and private-sector actors operate.The last two chapters address in greater detail the domestic political milieu and elite understandings of power that drive the making and implementation of American foreign policy.

"With his new volume, Professor Paul Viotti has made an important contribution to the study of national security and the decision making process that underpins it. At the very outset, he explains he is not seeking to present any new theory of foreign policy, but quickly pivots to the sometimes elusive world of the decision makers themselves and what drives them and why. The academic and practical world has often in recent years parted company. Professor Viotti seeks, through case studies and exhaustive analysis, to get them reacquainted." —Amb. Christopher R. Hill, former Assistant Secretary of State for East Asia and Pacific Affairs and former US Ambassador to Iraq, South Korea, Poland, Macedonia, and Albania

“Paul Viotti’s latest book American Foreign Policy and National Security brilliantly weaves together the manifold threads that go into the making of American foreign policy. Both beginning students and accomplished scholars have much to learn from this approachable and lucid study.” —David C. Hendrickson, Professor of Political Science, Colorado College

“In our time, international relations have become confused, indeed, utterly complex. Thinking about foreign policy now is a difficult matter, and reductionism (i.e., a limited single answer—or a few of them—to the how and why) is a very large temptation. And given American politics these days, reduction to personality (or disorders thereof), is an even greater temptation. In this book, Paul Viotti resists these temptations, while duly acknowledging the import of considering them, and he instead insists that students of foreign policy consider the virtues of rigorous rational analysis of the traditional sort.” —Kenneth D.M. Jensen, Senior Research Associate, Foreign Policy Research Institute

Paul R. Viotti is Executive Director of the Institute on Globalization and Security, University of Denver, where he is also a professor in the Josef Korbel School of International Studies. Professor Viotti holds a PhD in Political Science from the University of California, Berkeley, an MS from The George Washington University, an MA from Georgetown University, and a BS from the US Air Force Academy. His previous publications include US National Security: New Threats, Old Realities, The Dollar and National Security, American Foreign Policy, five editions of International Relations Theory, five editions of International Relations and World Politics, and three editions of The Defense Policies of Nations. He has served as President (1993–2003) and Vice Chair of the Board (2003–2016) for the Denver Council on Foreign Relations.

Part Three—Politics on the Potomac