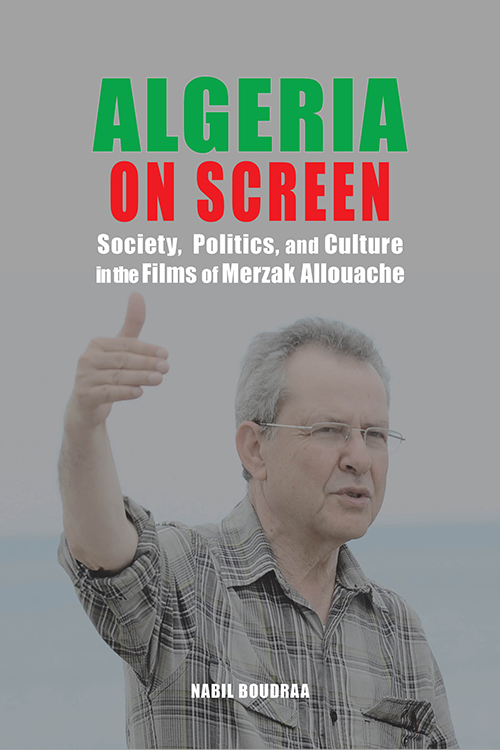 Algeria on Screen: Society, Politics, and Culture in the Films of Merzak Allouache by Nabil Boudraa

Reveals how Allouache broke away from state-run cinema to create an original style. This book offers contextual background and insightful perspectives to illustrate the complexity that characterizes Algeria.

Algeria is, without a doubt, one of the most complex societies of the modern world. This country is known for its ancient history, its multilingualism, its multiethnic social fabric, its glorious War of Independence, its leadership for Third World movements in the 1960s, and its tragic “Dark Decade” of the 1990s. To date, no filmmaker has depicted this Algerian complexity better than Merzak Allouache. He has devoted his entire filmmaking career, spanning over forty years, to a lucid portrayal of this complex and yet fascinating nation.

This study explains how Allouache broke away from state-run cinema to create an original style that makes him both unique and extremely interesting. Through an in-depth analysis of his films and documentaries, this book offers both contextual background and insightful perspectives to help the readers better understand this complexity which characterizes Algeria.

This is the first study in any language that examines Merzak Allouache’s entire filmography and it sheds light on most, if not all, the intriguing cultural, political and social changes that the Algerian people have been facing since independence in 1962. By making Algerian society the focal point in most of his films, Allouache provides a provocative commentary on social, historical, political, economic, linguistic, religious, and gender issues.

Algeria on Screen: Society, Politics, and Culture in the Films of Merzak Allouache is an important book for North African studies, French studies and Cinema studies.

Nabil Boudraa is Professor of French and Francophone Studies at Oregon State University. He holds a PhD from Louisiana State University, a Research Fellowship at Harvard University, an MA from Queens College, another MA from l’Université de Caen in France, and a BA from Algiers University. Boudraa’s previous publications include Francophone Cultures Through Film, Hommage à Kateb Yacine and North African Mosaic: A Cultural Re-appraisal of Ethnic and Religious Minorities. He has published in several journals such as The International Journal of Francophone Studies, The Journal of North African Studies, and The African Studies Review. Dr. Boudraa was a guest on several shows, namely BBC’s The Forum and NPR’s Morning Edition.

Chapter 2: The Rise of Islamic Fundamentalism and the Subsequent Whirlwind of Violence

Chapter 3: Europe at any Cost

Chapter 4: A Bittersweet Passing of the Storm

Chapter 5: Uncertain Times and New Issues at the Dawn of the New Millennium