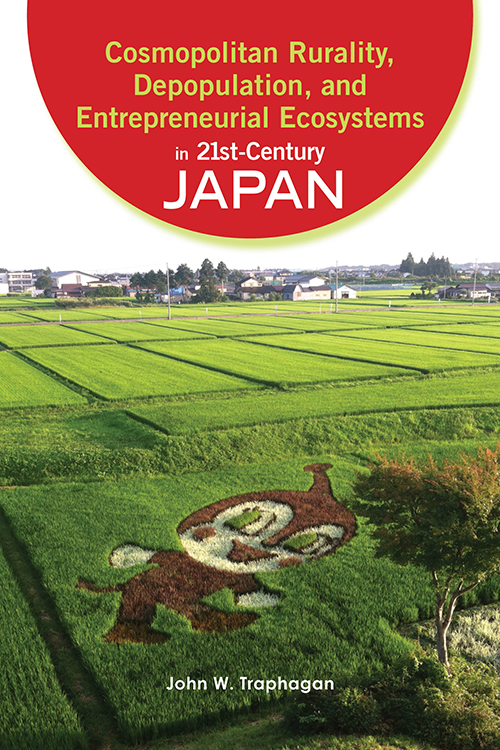 "Researched and written well, this book is suitable for both undergraduate and graduate students, and could be used in anthropology, Asian studies, or rural sociology courses.… Traphagan’s book deserves the praise it has received from other scholars, and should be read by anyone interested in Japan, rurality, trends toward cosmopolitanism, depopulation, or entrepreneurship.” —Rural Sociology

Since the beginning of the twenty-first century, Japan has been experiencing an unprecedented decline in population that is expected to accelerate over the coming decades. Rural areas, in particular, have been at the cutting edge of this demographic transition as young people often out-migrate to urban areas to pursue education and career opportunities and to explore spaces and lifeways viewed as cosmopolitan and international. At the same time, some urbanites have decided to either return to the rural climes of their upbringing or move there for the first time to start small businesses. And rural communities have attempted to attract large projects, such as the International Linear Collider, that it is hoped will draw in new people, prevent younger people from out-migrating, and bolster local economies. A combination of individual and institutional entrepreneurial activities is changing the social and geographical landscape of rural Japan and reinventing that space as one that blends perceptions and experiences of the urban and rural, cosmopolitan and rustic.

While there has been considerable research on rural Japan and numerous studies that focus on entrepreneurs, only limited attention has been paid to the intersection of entrepreneurial activities in rural Japan and the ways in which entrepreneurs more generally are contributing to the re-formation of rural space and place. This ethnographic study develops the concept of cosmopolitan rurality as a social and geographical space that cannot be characterized as either urban or rural nor as specifically cosmopolitan or rustic. In the “rural” Japan of the early twenty-first century, as in many other parts of the industrial world, we see the emergence of a new type of social context forming a hybrid space of neo-rurality that brings together people and ideas reflecting local, national, and global frames of experience. One of the key drivers behind this hybrid space is expressed in entrepreneurial activities by locals to generate an entrepreneurial ecosystem that it is hoped can attract new people and ideas while retaining ideational and geographical elements associated with traditional values and spaces.

Cosmopolitan Rurality, Depopulation, and Entrepreneurial Ecosystems in 21st-Century Japan is an important book for Asian studies, rural studies, anthropology, and the study of entrepreneurialism.

Listen to the podcast interview with Professor John Traphagan about his book.

"Easily accessible and highly informative … timely and applicable to the modern world. As the world becomes more connected, cosmopolitan, and urbanized, and depopulation begins to set in among more countries in the late stages of development, research on rural communities’ vitality will become ever more relevant.… Researched and written well, this book is suitable for both undergraduate and graduate students, and could be used in anthropology, Asian studies, or rural sociology courses. It is both an interesting read as well as an example of a specific anthropological study that keeps sight of the big- picture application. … Traphagan’s book deserves the praise it has received from other scholars, and should be read by anyone interested in Japan, rurality, trends toward cosmopolitanism, depopulation, or entrepreneurship.” —Rural Sociology

"The book is not only about entrepreneurs in rural Japan who transform their hometown, but also a collection of stories about how well-being is ultimately connected to a specific place and its social structures. Due to its richness of empirical data (from over 30 years of fieldwork) and the sophisticated elaboration on the interconnectedness of global, local, urban, rural, historical and contemporary aspects of Japan’s rural areas, Traphagan’s book is an excellent and intriguing read for students and scholars focusing on rural Japan, and probably also for people pondering about opening a shop in their own hometown." —Contemporary Japan

"An engaging and nuanced ethnography ... in an age when long-term fieldwork has increasingly become a luxury due to budget and time constraints, this monograph highlights the merits of engaging in longitudinal ethnographic research: Traphagan draws on more than three decades of ethnographic observations, which clearly have contributed to his nuanced reflections. Whereas the book’s analytical depth makes it suitable for graduate teaching, its accessible style could also attract undergraduate students or members of the general public. The book is of particular interest to scholars in anthropology, globalization studies, and rural studies, as well as business studies and human geography." —Susanne Klien, American Anthropologist

"A welcome contribution to social scientific studies that rebuts any simplistic reading of rural Japan as uniformly in decline or suspended in a formaldehyde of tradition. Following an excellent opening literature review of anthropological rural studies of Japan, Traphagan lays out his argument explaining how this region, though undergoing trends of depopulation and aging common in much of the nation, is home to thriving entrepreneurial ecosystems, networks and conditions that promote the emergence of creative business ventures. ... Traphagan has opened the door, first to rethinking how rural businesses function and can be sustained in the 21st century, and second to scholars who might utilize his work to focus on the more negative aspects of countryside cosmopolitics." —Asian Anthropology

"A much-welcomed source of reflections for scholars and students of Japan ... , the book’s simple prose and the author’s ability to convey his ideas in a clear and concise manner make Cosmopolitan Rurality, Depopulation, and Entrepreneurial Ecosystems in 21st-Century Japan a viable read for undergraduate students and academics alike." —Asian Ethnology

"A very engaging and thoughtful work that will be of great interest to Japan scholars and to any social scientists with a concern for conditions of life in contemporary rural regions in many of the advanced industrial societies. This is a book about entrepreneurship, depopulation, and the nature of the contemporary rural. Each of these is of broad and comparative significance. The Japanese countryside doesn’t look like the countryside of the sentimental imagination; it is a complex hybrid formation, much as we find in Europe and North America, giving the case a wide salience. Depopulation is a shorthand for several related trends of much consequence: population decline, yes, but rapid aging of the population and significant marriage delay, declining births, and solo living. This too is a feature of the rest of the “developed” world, but Japan’s trends are among the most advanced and there is much to learn from a judicious account such as this book. This is an impressive book, which should gain an enthusiastic and appreciative readership." —William Kelly, Professor of Anthropology and Sumitomo Professor of Japanese Studies, Yale University

“Traphagan’s book should be required reading not just for Japan specialists but for students, cultural anthropologists, gerontologists, demographers and anybody in general interested in the topics indicated in its title. The richness of his ethnographic descriptions conveys many tasty morsels of insight into Japanese culture reflected within life in Kanegasaki, Iwate Prefecture that pertains to pop culture, fashion, gender relations, food, religion, economics, and population loss here relevant to any locale. A very welcome practical and theoretical introduction to 'cosmopolitan rurality applicable globally today in the context of Japan!” —Professor Christopher Thompson, Department of Linguistics, Ohio University

“Move over Tokyo and Osaka, the countryside is where real cosmopolitanism and entrepreneurship can be found in Japan. From Toyota factories making hybrid cars from the global marketplace to the new sharing economy of drone-controlled tractors plowing organic farms, John Traphagan makes a compelling case based on over thirty years of close ethnographic fieldwork in the rural northeast for the dynamisms that can be found in places formerly considered peripheral but should now be understood as deeply networked.” —Professor Karen Nakamura, Department of Anthropology, University of California Berkeley

“John Traphagan, through his engaging account of six case studies of entrepreneurship in the remote northeastern Tohoku area of Japan, shows how the distinction between rustic and cosmopolitan, and rural and urban, is blurred by the hybridization of life and culture in contemporary Japan. The proliferation of the automobile gives people in the countryside access to the supermarkets, box stores and jobs in the suburbs or centers of the towns, sharing a life that differs little from the life of the town dwellers. The entrepreneurs in his case studies exhibit considerable creativity while also adhering to basic tenets of Japanese culture concerning family and community. All of this is taking place in an area of Japan that is experiencing worrisome depopulation with the ageing of society and the migration of young people to Tokyo and other large cities. This is an important and fascinating study showing basic changes in life and culture in Japan during the three decades of Traphagan’s fieldwork.” —Professor L. Keith Brown, Department of Anthropology, University of Pittsburgh

John W. Traphagan is a professor of religious studies and in the program in Human Dimensions of Organizations at the University of Texas at Austin, where he is also Mitsubishi Fellow in Religious Studies. He holds a PhD from the University of Pittsburgh, an MAR from Yale University, and a BA from the University of Massachusetts Lowell. Dr. Traphagan’s previous books on Japan include Taming Oblivion: Aging Bodies and the Fear of Senility in Japan and The Practice of Concern: Ritual, Well-Being, and Aging in Rural Japan.

Chapter 1: The Narrow Expressway to Oku

Chapter 5: The Gelato Shop at the End of the Universe