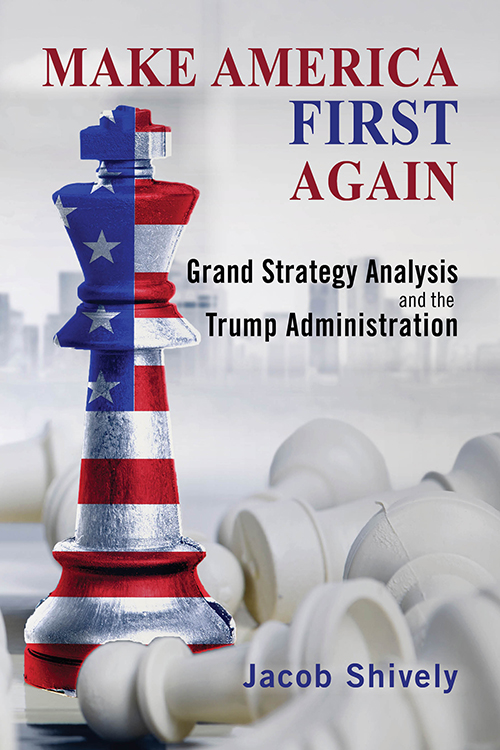 "Dr. Shively's assessment of a near-real-time, evolving process is insightful and reasoned. Those looking to understand the evolution of our nation’s strategy over the last few years can find answers in Make America First Again." —Strategic Studies Quarterly

This book examines US grand strategy between two moments, the 2016 presidential election and the 2018 midterm election. It is an early history and an assessment of the Trump administration’s grand strategy, but it is also a study of much larger questions. Like US presidents and other heads of government, Donald Trump provokes a wide range of debates. For grand strategy, the debates are familiar but profound: what exactly is the administration’s approach to the world and national security? In addition, can one administration or even one individual change a state’s grand strategy? Trump’s temperament is notoriously public. Is it also uniquely influential? Perhaps Trump the man fundamentally changed US grand strategy during this period. Or, perhaps, he and his administration were constrained by existing strategic commitments. To answer these questions, the following pages unfold the story of Trump’s early grand strategy.

As a concept, grand strategy itself remains contested. Scholars disagree about whether such strategies are easily changed based upon one leader’s prerogatives. They also debate whether and to what degree grand strategies are, in fact, a set of ideas and practices whose direction—like that of an oil tanker in a narrow channel—is unlikely to change. To study this concept itself, the book applies an innovative “grand strategy analysis” framework. Scholars and professionals have traditionally talked past one another on this topic, yet their work is converging. This project draws these strands together, and it uses them to help us understand Trump’s grand strategy. It aims to learn whether Trump is indeed a true strategist. It seeks to determine whether one man alone can revise his government’s grand strategy.

While some readers may disagree with the author’s final analyses, but hopefully they will find the claims unignorable, grand strategy analysis (GSA) a vital innovation, and the case history invaluable. To date, work on the Trump administration’s grand strategy, though extensive, has been journalistic, partial, or scattered. This book offers a more complete and systematic picture of Trump’s grand strategy over most of its first two years. For students, practitioners and scholars, such substantive, concrete work is foundational. The book also engages live and ongoing debates about how to characterize and assess grand strategy. Its grand strategy analysis proposal is an essential consideration for anyone studying or working in this field. Finally, the book sets the stage for ongoing debates. It offers insight for policy makers and a revised analytical framework for scholars.

"Utilizing a grand strategy analysis (GSA) framework to analyze President Trump’s foreign policy strategy, surveying promises and actions from the 2016 campaign to the fall of 2018. Dr. Shively carries the framework throughout the book to provide an intellectual rigor for his conclusions ... Dr. Shively grades the administration low on policy implementation and substance, gives failing grades for the management process, and assigns mixed grades for the handling of specific actors. The book’s analysis ends before the advent of the COVID-19 crisis and subsequent election cycle. ... His assessment of a near-real-time, evolving process is insightful and reasoned. Those looking to understand the evolution of our nation’s strategy over the last few years can find answers in Make America First Again." —Strategic Studies Quarterly

"Readable, insightful, and clear, Make America First Again is a book that all Americans who care about our national security should read. Dr. Shively applies a keen mind and acute analysis to an undersubscribed topic. Often public and even scholarly discussion of Donald Trump’s grand strategy is all too often consumed with bitter commentary from those strategists whose axioms Trump’s strategy dismissed. In contrast, Dr. Shively’s analysis is profound, clarifying Trump’s strategy without resorting to hyper-partisan and unedifying cheap shots. In the process, Dr. Shively’s illumination of the art of Grand Strategy Analysis constitutes a lasting contribution to the study of grand strategy itself, independent of any one leader or administration. Read this book to understand our current grand strategy for addressing America’s global challenges." —John Adams, Brigadier General, U.S. Army (ret.)

"In Make America First Again: Grand Strategy Analysis and the Trump Administration, Jacob Shively lays the groundwork for what will no doubt be a long debate over Trump’s grand strategy, and he does so with wisdom and aplomb. All future work on this subject will have to refer to this book. An interesting, important, and most engaging read." —Christopher J. Fettweis, Professor of Political Science, Tulane University

Jacob Shively is an associate professor in the Reubin O’D. Askew Department of Government at the University of West Florida, where he teaches international relations. He holds a PhD from Indiana University, where he completed his dissertation “Lost Ambition: Grand Strategy Stability and Abandoned Change in the Jimmy Carter and George W. Bush Administrations.” In addition to Hope, Change, Pragmatism: Analyzing Obama’s Grand Strategy, Dr. Shively’s other work includes academic articles, numerous papers and talks, media appearances, and briefings for national security professionals.

Chapter 5: The Rise and Fall of Principled Realism

Chapter 6: Donald Trump Is A Nationalist