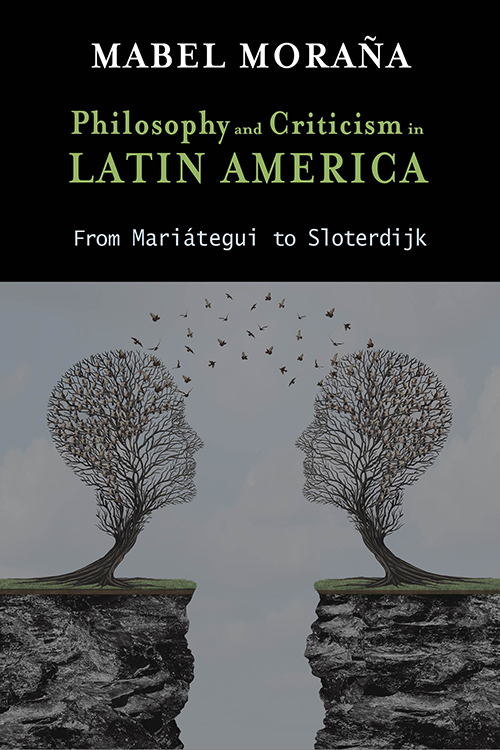 Philosophy and Criticism in Latin America: From Mariátegui to Sloterdijk by Mabel Moraña

"Moraña’s extensive commentaries on cultural emancipation in Latin America are a notable contribution to scholarship on that region’s sociocultural development. ... From José Carlos Mariátegui, Enrique Dussel, Bolívar Echeverría, and Roger Bartra to global thinkers such as Michel Foucault, Walter Benjamin, and Pierre Bourdieu, Moraña takes her readers on a tour-de-force voyage through significant landscapes of thought..." —Hispania

The objective of this book is not to recognize once again the sources of pre-Hispanic Amerindian or Afro-Hispanic thought in different regions and historical moments—a task that other critics have already accomplished admirably. Nor does this book attempt to return to the debates around the existence of a properly Latin American philosophy—a question that has also been thoroughly addressed. Rather, this book offers timely contributions to the process of conceptualizing a Latin American specificity and its forms of integration in larger contexts, both on the level of thought and the level of political and social praxis. To produce a critical reading of philosophy while also developing a philosophy of criticism is essential in cultures that continue to struggle for the decolonization of both thought and life.

The first part of the book, “Biopower, Coloniality, and Emancipation in Latin America,” examines authors and addressses questions from Latin American contexts in dialogue with some of the greatest thinkers of the twentieth century. These texts analyze the contributions of these authors to debates on such topics as the problems of colonialism and coloniality, the critique of modernity, and violence. Discussions of these issues give rise to other questions linked to the notions of freedom, social change, post/trans/modernity, biopolitics, and other topics that are particularly relevant for interpreting the processes of national formation and modernization and for understanding the developments that have taken place in the decades following the end of the Cold War.

The second part of the book, titled “Critico-Philosophical Re-Readings and Debates,” brings together texts that cover the work of philosophers whose ideas have strong links to Latin American thought. Benjamin, Foucault, and Bourdieu are all quite different thinkers, but they have in common the objective of deconstructing the discourse of power from different angles, providing forms of social consciousness that are in dialogue with Latin American critical and emancipatory projects on multiple levels. In addition to the above-mentioned philosophical directions, Peter Sloterdijk’s undeniably polemical thought opens up a new path for the critique of humanism. These approaches are studied in the present book in texts that constitute moments of critical reflection which, while recognizing these authors’ contributions to the development of critico-philosophical thought in peripheral areas, analyze aspects of their thought that can be interrogated and even challenged from a Latin American perspective. In this sense, this book suggests that, from the vantage point of Latin American cultural and political history, European philosophy, in spite of its claims of universality, clearly lacks satisfactory approaches to issues related to post/neo/colonial realities.

With its interdisciplinary focus, this book will be an important resource for scholars and students in Latin American studies, comparative literature, world literature, and philosophy.

“This book is a timely contribution to current debates on the role of philosophy beyond the North American and European traditions, allowing the Anglophone reader access to the world of ideas of some of the most relevant Latin American thinkers of our age. Through a meticulous discussion of the works and contexts of thinkers such as of José Carlos Mariátegui, Enrique Dussel, Bolívar Echeverría, and Roger Bartra to Walter Benjamin, Michel Foucault, Pierre Bourdieu, and Peter Sloterdijk, Mabel Moraña demonstrates that Latin American thought has not only been inseparable from Western philosophy but also from the determinants of its history and social struggles. By doing so, Mabel Moraña provides an extensive perspective on the connections between historical moments, social structures, and discursive practices. Ambitious and impressive in scope, this groundbreaking contribution destabilizes common assumptions in philosophy and criticism by untangling the intricate web of ideological, intellectual, and cultural positions proper to these disciplines, in and beyond Latin America.” —Adela Pineda Franco, Professor of Latin American Literature and Film, Boston University

"Mabel Moraña warns us about the dangers of a Westernizing epistemology, 'an episteme of Power' that oppresses different forms or worldviews, particularly those based on a close and deep experience of the reality that they try to interpret and change in Latin America. In Moraña’s words, 'criticism [becomes] a philosophical category and […] an essential component of the knowledge of the real.' The unequal process of knowledge and colonization has historically determined that European traditional philosophy places criticism and practice beyond the scope of true reflection and interpretation. For Moraña, practice and criticism constitute equally valuable forms of knowledge, interpretation, and representation which were developed in and for other cultural realities. Mabel Moraña’s book contributes to the theoretical emancipation of Latin America without falling into the common error of a certain decolonial theory that relies on an idealization of indigenous epistemes to deny the great legacy of Western philosophy. In that sense, Moraña takes up and updates the legacy of Latin American theorists of the 1960s and 1970s such as Roberto Fernández Retamar, Antonio Cornejo Polar, Ángel Rama, and others who tried to develop a literary and cultural theory appropriate to the nature of Latin American production, different from the European and Western traditions. This effort is due to the need to raise the struggle for the understanding and liberation of Latin America in the realm of ideas. This book is a major contribution to critical theory in Latin America." —José Antonio Mazzotti, King Felipe VI of Spain Professor of Spanish Culture and Civilization and Professor of Latin American Literature, Tufts University, and author of The Creole Invention of Peru: Ethnic Nation and Epic Poetry in Colonial Lima

"Moraña’s extensive commentaries on cultural emancipation in Latin America are a notable contribution to scholarship on that region’s sociocultural development. ... From José Carlos Mariátegui, Enrique Dussel, Bolívar Echeverría, and Roger Bartra to global thinkers such as Michel Foucault, Walter Benjamin, and Pierre Bourdieu, Moraña takes her readers on a tour-de-force voyage through significant landscapes of thought that have influenced the development of Latin America. As Moraña analyzes the work of well-known philosophers, critics, and writers alongside less-commonly studied theorists, she adeptly presents the reader with “quite different thinkers, but they have in common the objective of deconstructing the discourse of power from different angles” (21). Specifically, the work focuses intently on “the hegemony, privilege, and inequality” that the author views as “inherent to capitalism” (293). Moraña, thus, argues through the words of varied philosophers and her own criticism that “the notion of emancipation itself should not be restricted to the analysis of political programs or protest movements” (33), but rather involve the cultural liberation of thought as well. ... fresh, bold, and enlightening. ... Beyond scholarship, Hispania readers may also be interested in the work’s prospective value in the classroom. Sections of the book could be used with careful planning as readings in an advanced undergraduate course ... Moraña’s work has certainly enlarged my understanding of Latin American development and challenged my perspectives in positive ways." —Hispania

Mabel Moraña is the William H. Gass Professor in Arts and Sciences at Washington University in St. Louis. In addition to more than forty edited volumes, Dr. Moraña has authored fourteen books, including The Monster as War Machine and Arguedas / Vargas Llosa: Dilemas y ensamblajes, which won the 2013 MLA Katherine Singer Kovacs Prize.

Part I. Biopower, Coloniality, and Emancipation in Latin America

2. 1492: Enrique Dussel’s Contributions to the Re-discovery of the Americas

5. Journey to the Heart of Melancholia: Disenchantment and (Post-)Modernity in Roger Bartra

6. Biopolitics and the Social Body in Latin America

8. The Philosophy of Walter Benjamin and Peripheral Modernity

9. Bourdieu at the Periphery: Cultural Capital and the Literary Field in Latin America

10. Scarcity, Modernity, Globalization: From Precariousness to the Precariat

11. The Toolkit of Affect

12. The Question of Humanism in Latin America: Blind Spots and Lines of Flight

13. Humanism and Biopolitics: Monsters in the Human Zoo