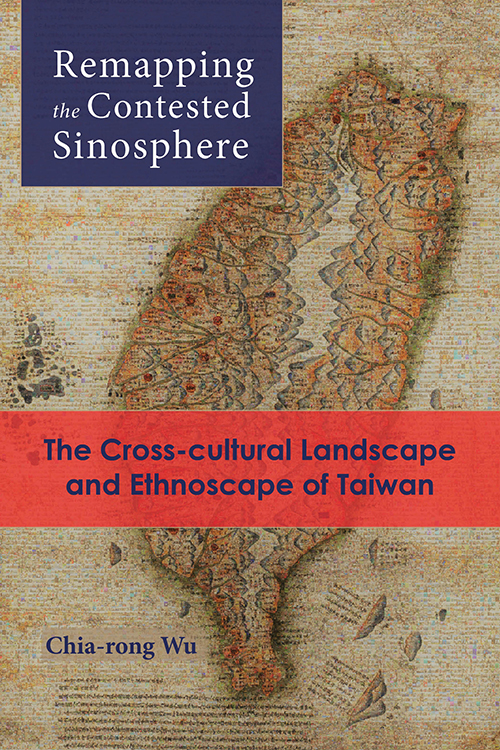 Remapping the Contested Sinosphere: The Cross-cultural Landscape and Ethnoscape of Taiwan by Chia-rong Wu

"Examining trends and transformations that go up against rigidly conceived, monolithic cultural ideologies and the distinctive achievements of a new generation of Taiwanese writers in various literary subgenres, this book engages in dialogue with critical issues raised by Sinophone Studies and is at the same time a welcome new addition to the Taiwanese literature scholarship in the English-speaking world."—Sung-sheng Yvonne Chang, The University of Texas at Austin

In the past four hundred years, the cultural position of Taiwan has been undergoing a series of drastic changes due to constant political turmoil. From the early seventeenth century to the late twentieth century, the ruling power of Taiwan shifted from Spaniard and Dutch to the Late-Ming Zheng regime, then to the Qing court and imperial Japan, and finally to the Kuomintang (KMT) government from China. In this regard, Taiwan has long been regarded as a supplementary addition to its cultural Other: China, Japan, or imperial western powers, despite its rich Aboriginal cultures. To create a self-claimed subjectivity, the localist camp of the island has been promoting the Taiwanese consciousness via political movements and literary writings in a century-long campaign. Its focus on the native soil and experience is well connected with the Sinophone studies, which has been a prominent field across geographical and disciplinary barriers.

As Taiwan's community grows more diverse, Taiwan literature is enriched by a series of locally based writings that draw attention to a specific space and/or to the division between places. In the twentieth century, more and more Taiwanese writers are no longer content with a singular place or dual comparison in their literary creations. Rather, they have started to recognize the plurality of Taiwaneseness and thus re-create an ambiguous form of the Taiwanese subjectivity in response to the conflict and compromise between political beliefs and ethnic groups in a cross-cultural light.

To further engage with the multifaceted cultural expressions of Taiwan, this book speaks to the current framework of Sinophone studies by focusing on modern Taiwan and its entanglement with cultural China, Chinese diasporas, nativist trend, and Aboriginal consciousness. Recognizing the unresolved ethnic issues of Taiwan, this study explores different dimensions of ethnoscape in response to the cross-cultural landscape of Taiwan and beyond, while at the same time taking into account the intertwining of the official history and the individual, or ethnic, memory of Taiwan.

"This book is phenomenal as it captures the complexity of Taiwanese identities through an analysis of different genres of literature, but ultimately the arguments connect back to the postcolonial and multicultural contexts of Taiwan’s history. By adopting the framework of the Sinophone, Wu is able to expand his angles of examination beyond locality...Remapping the Contested Sinosphere is a comprehensive and comparative survey of Taiwanese literature through transcultural and translocal frameworks...focuses on five literary trends in Taiwanese literature through the Japanese colonial period, the Kuomintang regime, to the present day. Wu provides exceptional analysis of each literary genre against the backdrop of Taiwan’s colonial and authoritarian histories and presents an overview of Taiwan’s literature that is reflective of Taiwan’s multicultural and hybrid identity." —International Journal of Taiwan Studies

"In Remapping the Contested Sinosphere, Dr. Chia-rong Wu situates Taiwan in the ever-evolving Sinosphere as both a historical entity and a narrative construct. He identifies indigenous and diasporic contestations, introduces multiple genres and discourses, and ponders the consequences of literature as a unique manifestation of the island as it encounters the world. Historically informed and methodologically engaged, Wu’s book is sure to be an invaluable source for anyone interested in the cultural dynamics of Taiwan in the Sinophone and global contexts." —David Der-wei Wang, Harvard University

"Literary scholars nowadays are having difficulties identifying an overarching frame of reference for their historiographical works where contemporary Taiwanese literature is concerned. Remapping the Contested Sinosphere offers a felicitous, alternative approach to this conundrum. Examining trends and transformations that go up against rigidly conceived, monolithic cultural ideologies and the distinctive achievements of a new generation of Taiwanese writers in various literary subgenres, this book engages in dialogue with critical issues raised by Sinophone Studies and is at the same time a welcome new addition to the Taiwanese literature scholarship in the English-speaking world."—Sung-sheng Yvonne Chang, The University of Texas at Austin

“Remapping the Contested Sinosphere takes issue with the prevalent Sinophone or post-loyalist criticism by considering a rich diversity of works ranging from historical novels to aboriginal discourse, science fiction, nature writing, and Taiwanese American literature. It offers the most comprehensive and sensible interpretive accounts of contemporary Taiwan literature that are not only theoretically sophisticated and geopolitically engaged but also contextually revealing, with nuanced textual analysis. This monograph is an invaluable primary resource for scholars in Asian studies, comparative literature, and Sinophone studies.” —Ping-hui Liao, University of California, San Diego

Chia-rong Wu is an Associate Professor (Reader) in the Department of Global, Cultural and Language Studies at the University of Canterbury, New Zealand. Prior to this appointment, Dr. Wu was Associate Professor of Chinese Studies at Rhodes College. He holds a PhD in Comparative Literature from the University of Illinois at Urbana-Champaign. In addition to his book Supernatural Sinophone Taiwan and Beyond, Dr. Wu has published articles in journals such as Journal of Chinese Cinemas, The American Journal of Chinese Studies, New Zealand Journal of Asian Studies, Studies on Asia, and ASIANetwork Exchange.

Chapter 3: The Reconstruction of Indigeneity in Sinophone Taiwan