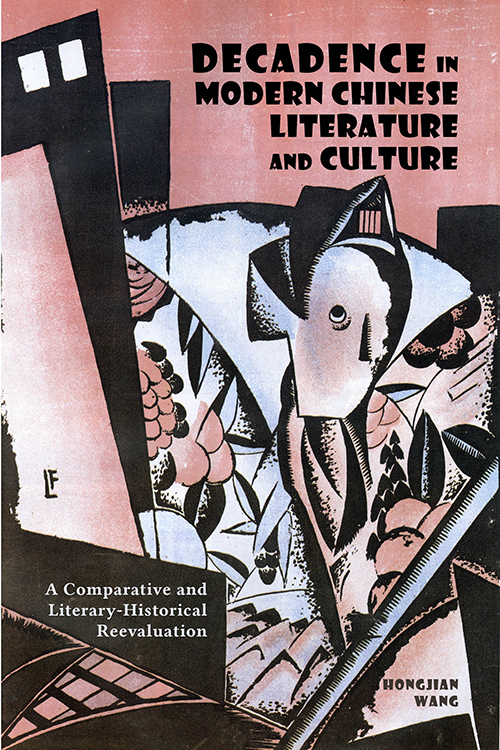 Decadence in Modern Chinese Literature and Culture: A Comparative and Literary-Historical Reevaluation by Hongjian Wang

"A fascinating study, Decadence in Modern Chinese Literature and Culture analyzes work by literary luminaries such as Yu Dafu, Shao Xunmei, Yu Hua, Su Tong, Wang Shuo, Wang Xiaobo, and Lin Lichuan, exposing writers’ use of the perverse and the decadent to counter traditional aesthetics and excessive politicization while carving out a new modern position for Chinese letters. This book brilliantly illuminates many hidden corners in a complex literary history." —Wendy Larson, University of Oregon

European Decadence, a controversial artistic movement that flourished mainly in late-nineteenth-century France and Britain, has inspired several generations of Chinese writers and literary scholars since it was introduced to China in the early 1920s. Translated into Chinese as tuifei, which has strong hedonistic and pessimistic connotations, the concept of Decadence has proven instrumental in multiple waves of cultural rebellion, but has also become susceptible to moralistic criticism. Many contemporary scholars have sought to rehabilitate Chinese Decadence but have found it difficult to dissociate it from the negative connotations of tuifei. More importantly, few have reconnected Decadence with its steadfast pursuit of intellectual pleasure and unique paradoxes or explored the specific socio-historical conditions and cultural dynamics that gave rise to Decadence.

This is the first comprehensive study of Decadence in Chinese literature since the early twentieth century. Standing at the intersection of comparative literature and cultural history, it transcends the framework of tuifei by locating European Decadence in its sociocultural context and uses it as a critical lens to examine Chinese Decadent literature and Chinese society. Its in-depth analysis reveals that some Chinese writers and literary scholars creatively appropriated the concept of Decadence for enlightenment purposes or to bid farewell to revolution. Meanwhile, the socialist system, by first fostering strong senses of elitism among certain privileged groups and then rescinding its ideological endorsement and material support, played a crucial role in the emergence of Chinese Decadent literature in the European sense.

This study is also the first to offer a holistic understanding of European Decadence, uncovering both its internal logic and external circumstances, hence excavating its distinct explanatory power. It also sheds fresh light on modern Chinese literature and culture. By examining the careers of seven prominent writers—Yu Dafu, Shao Xunmei, Yu Hua, Su Tong, Wang Shuo, Wang Xiaobo, and Yin Lichuan—this study disentangles apparent contradictions in their writing and reveals the nuances in the changing status of China’s modern cultural elite. Last but not least, the book significantly expands the scope of comparative literary studies beyond influence studies and cultural translation by effectively adopting a literary-historical approach—a literary phenomenon is seen at once as a product and an indicator of certain sociocultural conditions, so similar literary phenomena can illuminate comparable contexts.

"A fascinating study, Decadence in Modern Chinese Literature and Culture analyzes work by literary luminaries such as Yu Dafu, Shao Xunmei, Yu Hua, Su Tong, Wang Shuo, Wang Xiaobo, and Yin Lichuan, exposing writers’ use of the perverse and the decadent to counter traditional aesthetics and excessive politicization while carving out a new modern position for Chinese letters. This book brilliantly illuminates many hidden corners in a complex literary history." —Wendy Larson, University of Oregon, and author of Zhang Yimou: Globalization and the Subject of Culture

"Hongjian Wang is to be commended for filling a gap in scholarship by reevaluating decadence or tuifei as a consistently marginalized, intentionally misunderstood, but productively contentious type of creative writing that persisted in China from the early twentieth century to the early twenty-first century. Wang’s comparative approach succinctly captures the unique strengths of European decadence in relation to aestheticism and romanticism on the one hand and contextualizes the various ways in which modern Chinese writers position themselves vis-à-vis European ideas of decadence to create their own brands of tuifei on the other. From Yu Dafu and Shao Xunmei from the Republican period to the avant-garde as well as popular writers of the new fin de siècle (Yu Hua, Su Tong, Wang Shuo, Wang Xiaobo, and Yin Lichuan), Wang offers insightful analysis of their engagements with decadence and their readjustments in different sociocultural conditions. The result is a fascinating book for people interested in art, literature, intellectual debates, and cultural history with a comparative perspective to enjoy." —Yingjin Zhang, University of California, San Diego, and coeditor of Locating Taiwan Cinema in the Twenty-First Century

Part I: Seeing Romanticism through Decadence: Tuifei Writers in the 1920s and 1930s

Part III. Performing Perversion: Decadence with Chinese Characteristics from the Mid-1980s to the Turn of the Century

Conclusion: The Rise and Fall of China’s Modern Cultural Elite