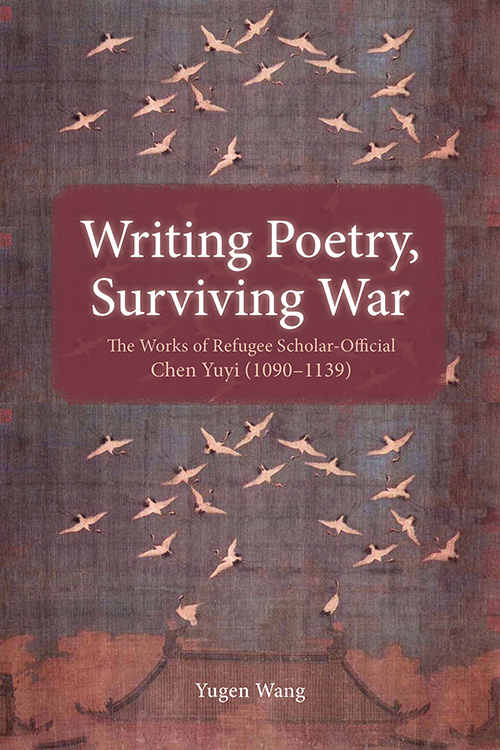 "A meticulous study of Chen Yuyi’s evolution as a poet in the context of his personal experience and the literary trends in the transitional period between the Northern and the Southern Song. The copious and judicious translations of Chen’s poetic works are well executed and accompanied with incisive explications." —Xiaoshan Yang, University of Notre Dame

The book is a study of the works of the Northern Song Chinese poet Chen Yuyi (1090–1139) as he fled the invading Jurchen soldiers in the political throes of a dynastic transition. Author Yugen Wang demonstrates how Chen’s poems epitomize the new style of writing in the Song that is markedly different from that of his Tang predecessors.

Underscoring this stylistic and aesthetic analysis is a comparison of Chen and his model, the Tang master Du Fu (712–770). Wang concludes that although the traumatic experience triggered Chen’s inner Du Fu, he and Du were writing from different literary and cultural assumptions, with different expectations and skill sets. The collective eleventh-century pursuit of ideological and intellectual cohesion requires that Chen write more cogently than Du Fu; the urgent contingencies of his travel mandate that he observe and make sense of the political chaos from the perspective of a realistic road traveler. The result is a compact, practical, logically coherent, and technically precise style with ramifications that go far beyond Chen’s own times.

This is the first book-length study of Chen’s poetry in English. Through detailed analysis of Chen’s poems, and of the political and psychological conditions under which they were written, the reader gains intimate insights into not only how a classical Chinese poet conducted his business, on the road, in crisis, but also the sources of the poet’s inner strength, what culturally, psychologically, and emotionally sustained him on the long dreadful journey.

This was an important moment for Chen Yuyi and for Chinese literary history. Chen’s poems bring to focus the changing dynamics of the classical Chinese poet’s relationship to the world. As his journey grew longer and brought him farther away from central China, the richness of the local landscapes in the south made him less apprehensive about the political situation, allowed him to endure the constant fluctuations in his environment, and revitalized his inner self as a poet. As Chen struggled and reconciled with the political situation, he achieved a new balance between person and world, mind and landscape, a status later Chinese critics and theorists call qingjing jiaorong, the propitious fusion and coming together of emotion and nature in poetry.

Writing Poetry, Surviving War: The Works of Refugee Scholar-Official Chen Yuyi (1090–1139) is an original study on Chinese poetry and an important book for Asian studies and premodern Chinese humanities collections. It targets both the scholarly and the general audience whose interests intersect China, premodern travel, trauma literature, traditional ideas of nature, and landscape poetry.

"This is a meticulous study of Chen Yuyi’s evolution as a poet in the context of his personal experience and the literary trends in the transitional period between the Northern and the Southern Song. Yugen Wang’s knowledge of the subject is comprehensive; his command of primary and secondary sources in Chinese and English is impressive. The presentation of the arguments is clear and persuasive. The copious and judicious translations of Chen’s poetic works are well executed and accompanied with incisive explications. The lucid and elegant prose style of the book makes it a pleasure to read for both experts and general readers." —Xiaoshan Yang, University of Notre Dame

"In this first full-length study of Chen Yuyi in English, Yugen Wang provides a meticulous reading of Chen’s most important poems that reflect his empire’s upheaval after the Jurchen invasion of Song China in 1126. The book focuses on Chen’s poems written during his years as a refugee from the invasion, wandering through unfamiliar landscape and trying to come to terms with personal displacement and dynastic calamity. Through it all, the verse of the Tang poet Du Fu shines upon him as a beacon and a challenge, and it is through this light that Chen finds his own poetic voice and a path to solace." —Ronald Egan, Stanford University

“For Chen Yuyi, poetry was a way to come to an understanding of adverse circumstances and find his way eventually to some kind of solace ... For Chen, poetry can bring order in a disorderly world ... Chen, too, uses poetry to alter his psychological state ... Wang's book is more formal and analytical, and is based on prodigious research using Chinese and English sources” —Asian Review of Books

Yugen Wang is an associate professor of Chinese literature at the University of Oregon. He holds a PhD from Harvard University, an MA from Peking University, and a BA from Anhui Normal University. Dr. Wang’s previous publications include Ten Thousand Scrolls: Reading and Writing in the Poetics of Huang Tingjian and the Late Northern Song. He has published in several journals such as T’ang Studies, The Journal of Song-Yuan Studies, and The Journal of Chinese Literature and Culture. Dr. Wang has taught previously at Peking University.