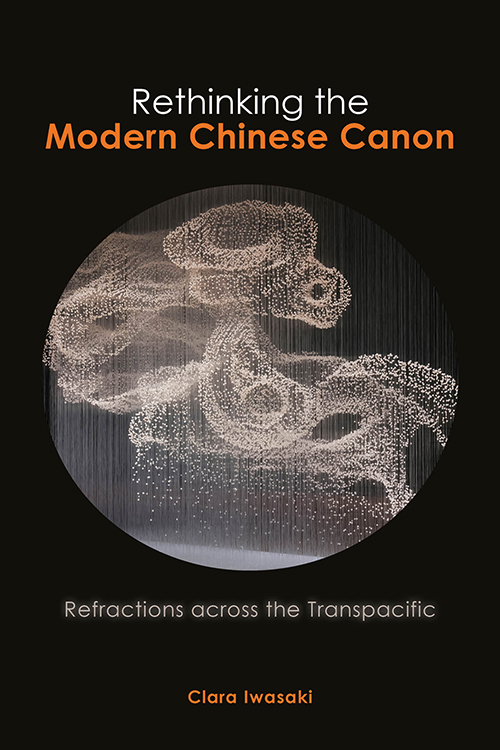 Rethinking the Modern Chinese Canon: Refractions across the Transpacific by Clara Iwasaki

The texts that are examined in this study move in and out of different languages or are multilingual in their origins. Texts and authors do not move randomly; rather, they follow routes shaped by the history of contact between different nations of the transpacific. As these texts move into and out of the Chinese language or become multilingual, they necessarily do not always remain Sinophone. The works of the authors discussed are refracted out of Chinese literature into American, Malaysian, and Japanese literatures and, in some cases, back into Chinese again. Following their paths through multiple languages makes visible the ways that these trajectories are informed by, are arrested by, and bend around historical and geopolitical barriers across the Pacific. To this end, examining the path that these texts from a transpacific perspective allows for the possibility of not only multilingual but multidirectional movement.

The transpacific trajectories discussed in this book give rise to a number of different versions or interpretations of several texts. When put into conversation with one another, these texts often acquire new meaning as they move between different languages, countries, or time periods. In Rethinking the Modern Chinese Canon, author Clara Iwasaki reads four canonical Chinese writers in relation to their translations, interpellations, and interpretations in different languages, revealing them to be more worldly than previously supposed. Texts, writers, and characters appear in different languages, sometimes taking markedly different forms. Authors translate and translators become authors. When individual texts are read in the context of their language or country of origin, these valences of meaning become lost. It is in reading clusters of texts together that these hidden relationship to other writers, other languages, and other texts become visible. To this end, Iwasaki looks at four writers, Xiao Hong, Yu Dafu, Lao She, and Zhang Ailing, through what she calls refractive relations. Following transpacific circuits, these writers and texts move not simply from periphery to center, or from obscurity to canon, but back and forth between literary, linguistic, and national communities. Many literary encounters today have their origin in meetings of authors and texts decades earlier. Rather than focusing on a single text, this book focuses on the relationship between the different works and how these texts acquire meaning when read in relation to each other.

"This clear-eyed and insightful book productively troubles the received boundaries of the canonical in Chinese and world literatures. Where many literary studies focus on vertical patterns of influence—dissecting which earlier authors influenced which modernists, for example, or how certain writers pressed their work into service toward political ends—this book works horizontally, arguing that many 20th-century Chinese writers engaged in direct dialogue with the literatures of the world through translation as well as through other forms of collaboration and communication. The book therefore offers a powerful and subtly radical reimagining of the global nature of circulated texts, whether in translation or through translation’s effective minions of appropriation, mimesis, and transnational dialogue. Writers and their works are not static, this book demonstrates, but rather are always already engaged in a dynamic conversation across time and space and—crucially—across language. The book will benefit scholars not only of modern Chinese literature but also of Sinophone studies, comparative literature, American studies, Asian American studies, transpacific studies, cultural studies, and even modern comparative history, and it will be an important teaching tool in translation studies." —Ari L. N. Heinrich, Australian National University

"Rethinking the Modern Chinese Canon uncovers forgotten processes of literary exchange and circulation from the Republican era to the post–Cold War era surrounding early modern Chinese literary figures Xiao Hong, Yu Dafu, Lao She, and Zhang Ailing. This original and innovative study not only offers a bold and refreshing approach to transpacific studies that is broader in scope than its existing North America–Asia paradigm but also prompts us to question the canonical formation of world and Chinese literatures. By invoking the critical potential of the Sinophone as both category and methodology, Clara Iwasaki argues for the importance of literary relations that do not reflect the ideology of national liberation and/or the essence of nationalism in the first half of the 20th century with regards to China. This book will no doubt be a useful research and teaching resource for scholars in Sinophone studies, transpacific studies, comparative literature, world literature, modern Chinese literature, Asian American studies, and translation studies." —E. K. Tan, Stony Brook University, author of Rethinking Chineseness: Translational Sinophone Identities in the Nanyang Literary World

“Chinese literature is often read in translation, but we have not sufficiently reflected on what translation does for Chinese authors and to their texts. By putting translation at the center, Rethinking the Modern Chinese Canon destabilizes the notion of a “Chinese” writer. This study effectively shifts the conventional focus on literary authorship as rooted in place of origin and native language, accounting instead for the multilingual collaborations on the works of four important writers—Xiao Hong, Yu Dafu, Lao She, and Eileen Chang (Zhang Ailing)—as they transit across disparate locations. New facets of these well-known authors thus begin to emerge.” —Paola Iovene, The University of Chicago

Clara Iwasaki (PhD, UCLA) is Assistant Professor of Modern Chinese Literature in the Department of East Asian Studies at the University of Alberta.

Introduction: No Heroes, No Villains

Chapter 3. Pieces of a Broken Mirror: Lao She, Helena Kuo, Ma Xiaomi, and The Drum Singers

Chapter 4. “In My End is My Beginning”: Zhang Ailing’s Parasitic Autobiographical Novels

Conclusion: In Praise of Messiness