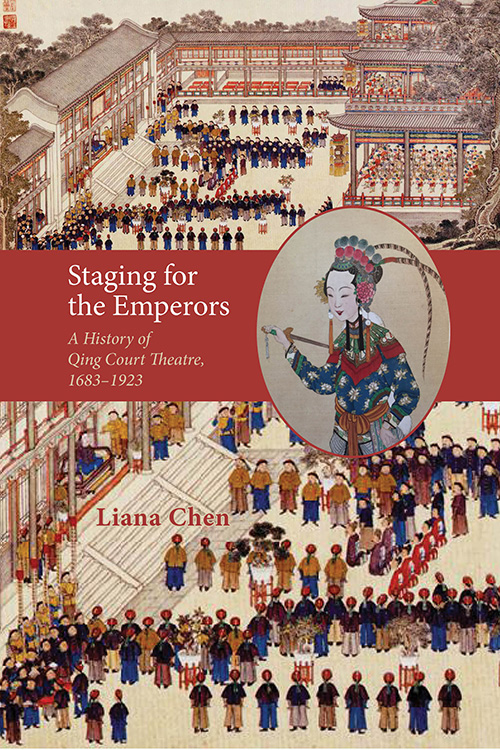 Staging for the Emperors: A History of Qing Court Theatre, 1683–1923 by Liana Chen

"I have read this book with great pleasure and learned a lot from it. This study is evidently based on extensive and careful research of primary sources, and it presents a clear outline of the development of court drama during the Qing dynasty. Doing so, Liana Chen focuses on the reigns of Kangxi, Qianlong, and Jiaqing, and the years Cixi was in power. Such a study is very welcome." —Wilt Idema, Harvard University

Theatrical performance occupied a central place in the emotional and political life of the Qing dynasty imperial household. For over two centuries, the Qing court poured a tremendous amount of human and material resources into institutionalizing the theatrical arts for the purposes of entertainment and edification. The emperors and empresses were ardent patrons and key players in establishing an artistic form that the court theatre called its own. They went to great lengths to cultivate a discerning taste in theatre and oversaw the artistic and managerial aspects of court theatrical activities. In the imperial theatrical spaces within and outside the Forbidden City, which were designed and built with the capacity to produce stunning visual effects, theatrical productions were staged to entertain imperial family members and to impress obeisance-paying guests from near and afar.

Much scholarly attention has been devoted to understanding the dynamics between the Qing court theatre and the burgeoning popular theatrical traditions outside the court. However, the insights drawn from recent studies have only begun to be applied to the analysis of dramas commissioned by the Qing court for various ceremonial occasions. Treating Qing dynasty court theatre as a unique site in which to examine important but uncharted realms of Chinese theatrical experience, Staging for the Emperors examines two distinct and interlocking dimensions of the Qing court theatre—the vicissitudes of the palace troupe and the multifaceted functions of court-commissioned ceremonial dramas—to highlight the diverse array of views held by individual rulers as they used theatrical means to promote their personal and political agendas. Drawing on recently discovered materials from a variety of court administrative bureaus, memoirs, diaries, and play scripts written for court ceremonial occasions, this study places the history of Qing court theatre in the broader context of Qing cultural and political history. It demonstrates that theatre, like other forms of courtly art, served the individual rulers’ desire to embody virtue, to entertain at leisure, and to project aspirations.

Staging for the Emperors would appeal to readers interested in China studies and performance studies. It would also appeal to those outside the field of China studies who are interested in developing a crosscultural perspective on the interplay between state rituals, power, identity formation, and theatrical experiences.

"I have read this book with great pleasure and learned a lot from it. This study is evidently based on extensive and careful research of primary sources, and it presents a clear outline of the development of court drama during the Qing dynasty. Doing so, Liana Chen focuses on the reigns of Kangxi, Qianlong, and Jiaqing, and the years Cixi was in power. For each of these periods the personal interventions of the ruling emperors are stressed, and the resulting changes in court theater are discussed by focusing on one play in particular. Such a study is very welcome." —Wilt Idema, Harvard University

“This is a pioneering and substantive work. Written in clear prose, the book reports a wealth of data culled from archived Qing-court theatre documents that have gradually become available for scholarly examinations since the 1970s. Diverse and voluminous, many of these archived documents have yet to be systematically studied. A substantive number of the documents are performance scripts, with and without stage instructions and/or music notation. To effectively decipher them, readers need to have extensive experience performing or witnessing the dramas being staged. And only readers with detailed knowledge about Qing-court institutions and cultural life would be able to distill from the documents a meaningful trajectory of Qing-court theatre developments. Liana Chen has done a herculean job, constructing a meaningful and informative narrative. However one reads it, this book is a major contribution to scholarship on Qing history and Chinese opera. Based on analytical readings of the archived documents and judicious use of current and international theories on theatre and Qing history, this study provides a brocade of creative interpretations that illuminate as well as challenge conventional and Chinese studies, many of which are merely bibliographic and/or descriptive. Chen convincingly argues that within a ritual and court context of receiving and bestowing gifts, Qing emperors and empresses used theatre to project their imperial glories and benevolence. Chen’s argument dovetails with traditional and current understandings of Chinese ritual and music (liyue), and it aligns with interpretations about royal rituals and performing arts all over the world.” —Joseph Lam, University of Michigan

"Chen’s re-creation of the Qing theatre is based on extensive research, reflecting the wealth of materials. Many original scores with detailed staging, as well as purchase orders, production notes and memoirs of the period survived the downfall of the dynasty in 1912 and made their way into archival collections and Chinese publications. Her narrative is lively, and by and large free of the theoretical language that makes American academic writing sometimes difficult to follow. She makes her point well, that the Qing stage was as much about how the Qing wanted to be seen as what they wanted to watch. Lovers of Chinese opera as well as those interested in China’s early modern history will find much to stimulate them in this book." —Asian Review of Books

Liana Chen is Assistant Professor of Chinese and International Affairs at The George Washington University. She holds a PhD in Chinese literature from Stanford University, and an MA in theatre and drama from National Taiwan University. Dr. Chen is the author of Literati and Actors at Work: The Transformations of “Peony Pavilion” On Page and On Stage in the Ming and Qing Dynasties (Taipei: National Taiwan University Press, 2013). She has published in several journals, including NAN NÜ: Men, Women and Gender in China and Asian Theatre Journal. Dr. Chen’s areas of teaching and research focus on late-imperial Chinese literature and culture, Chinese theatre and drama, and Taiwanese literature. Her research has been supported by the Foundation for Development of Chinese Culture (Taiwan), and the American Council of Learned Societies.

Chapter 3. The Aporia of Hospitality

The Actors’ Talent and The Dowager’s Taste