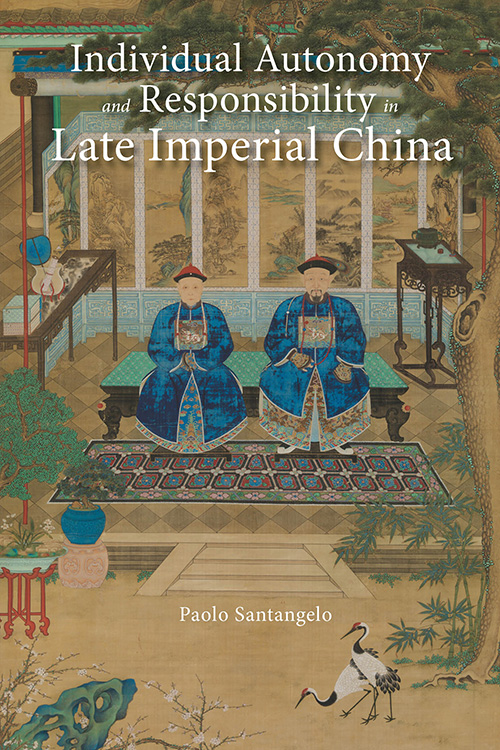 “A timely masterpiece … A major strength of the book is its comparative perspective. Santangelo not only compares and contrasts the terms and reflections within Buddhist, Confucian, and Daoist contexts, but he also expertly brings Western concepts into conversation with the East Asian constructions of self, destiny, shame, and pleasure." —Guotong Li, California State University, Long Beach

Individual Autonomy and Responsibility in Late Imperial China is a major new work by one of Europe's most respected senior scholars of Chinese studies, Paolo Santangelo. In it, he questions the common premise that individualism was lacking in premodern China. It is Santangelo's contention that not only was the concept of the individual important in traditional China, but that it existed in interesting ways that are different from modes of individualism in the West.

One of the strengths of this study is the masterful manner in which Professor Santangelo treats key terms of his discussion, terms such as xing ("human nature”), xin ("heart-mind"), ji ("self"), and uses them to analyze various texts.

The study deftly weaves together many ideas from history, philosophy, art, and literature, especially the literary dimensions of late imperial history (both classical and vernacular).

Another unusual facet of Santangelo's investigations is his thorough familiarity with the the Western intellectual tradition and his expert incorporation of the ideas of thinkers such as Immanuel Kant, David Hume, John Stuart Mill, and the Romantics

This inquiry into the moral philosophy and ethics of the self—seen in both its public and private dimensions—in late imperial China is an important resource for scholars and students in many subfields of Chinese studies, such as history, intellectual history, art history, history of literature, and history of religion.

“Paolo Santangelo’s Individual Autonomy and Responsibility in Late Imperial China is a timely masterpiece on the hotly debated issue of Chinese individualism in Confucian tradition. Building on his knowledgeable survey of the secondary literature, Paolo Santangelo adeptly brings several studies with different perspectives into an insightful conversation representing the past and recent debates on the terms and cultural contexts relevant to personal autonomy and moral responsibility. His strong grasp of the literature forms a solid foundation of his own interpretation of the subject from a broad array of primary sources, such as literary, philosophical, and religious texts. A major strength of the book is its comparative perspective. Santangelo not only compares and contrasts the terms and reflections within Buddhist, Confucian, and Daoist contexts, but he also expertly brings Western concepts into conversation with the East Asian constructions of self, destiny, shame, and pleasure. He also demonstrates the change and continuity of the terms and concepts throughout the time through comparisons between the Ming-Qing period and the pre-Qin period. This book is a successful ‘rediscovery’ of the individualism in Chinese culture.” —Guotong Li, California State University, Long Beach

Paolo Santangelo is Professor Emeritus of East Asian history at Sapienza University of Roma, and Editor-in-Chief of Ming Qing Studies. His books include Sentimental Education in Chinese History: An Interdisciplinary Textual Research in Ming and Qing Sources, Materials for an Anatomy of Personality in Late Imperial China, Shan’ge, the ‘Mountain Songs’: Love Songs in Ming China (coauthored with Oki Yasushi), Zibuyu, “What the Master Would Not Discuss”, according to Yuan Mei (1716-1798): A Collection of Supernatural Stories (in cooperation with Yan Beiwen), Passion, Romance and Qing: The World of Emotions and States of Mind in Peony Pavilion (coauthored with Tian Yuan Tan), Revisiting Liaozhai zhiyi, and The Culture of Love in China and Europe (with Gábor Boros).

Part I: Tension Toward Personal Autonomy in the Confucian Tradition

Chapter 5: Past and Recent Debates

Chapter 6: New and Old Elements on the Centrality of Self

Part II: The Sense of Responsibility in Ming and Qing Confucianism

Chapter 9: Heaven, Destiny, Mind, and Will