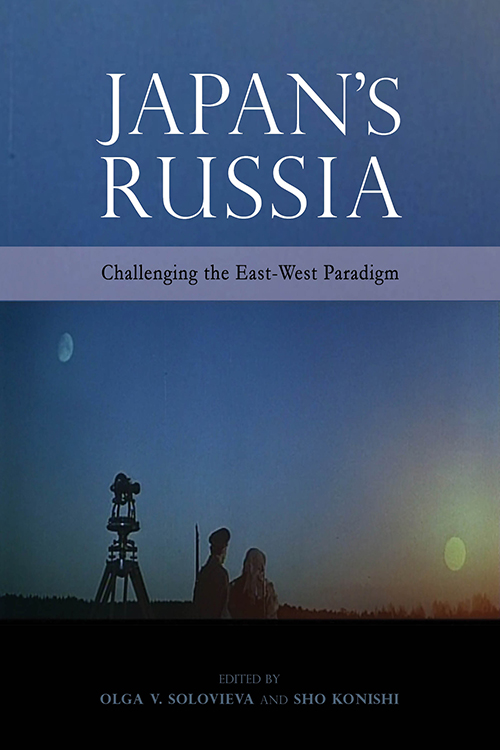 The Russian cultural presence in Japan after the Meiji Revolution was immense. Indeed, Japanese cultural negotiations with Russian intellectuals and Russian literature, art, theology and political thought, formed an important basis for modern Japanese transnational intellectual, cultural, literary, and artistic production. And yet, despite the depth and range of “Japan’s Russia,” this historical phenomenon has been markedly neglected in our studies of modern Japanese intellectual life. This absence may be attributed to the fact that “Japan’s Russia” as idea and cultural expression developed outside the logic of Western modernity. There has been an interconnected logic behind this ignorance, a systematic lacuna in our historiography that tied method to historical actors, concept to theory.

This volume seeks to depart from this logic in order to identify thoughts and practices that helped produce a dynamic transnational cultural phenomenon that we identify as “Japan’s Russia.” It does so by orchestrating case studies from cutting-edge scholarship originating in multiple disciplines, each with its own methodological and theoretical implications.

Japan's Russia contributes to the uprooting of the temporal-spatial order of Western modernity and its territorial utopia. It departs from such habits of thinking to make sense of the magnitude and distinctiveness of Russia-related cultural and intellectual expressions and manifestations in Japan. It offers fresh insights into Japanese-Russian transnational intellectual history, a life that was polyvalent, multidirectional, mutually enabling and constructive, linking Japan with the wider world in alternative ways. Precisely because the global history of modernity has had no way of recognizing such non-imperial encounters, their theoretical implications and historical significance are immense. Indeed, they offer to transform our understanding of modern transnational cultural life at large. By redirecting the flow of transnational cultural production to defy the dichotomies of East and West, civilized and uncivilized, nature and culture/civilization, colonizer and colonized, and associated conceptual vocabularies and approaches, the volume transcends our ways of knowing. By shifting our lens from international to transnational, state to non-state, center to periphery, territorial to non-territorial, imperial to non-imperial, this volume discerns fresh imaginations of the future in the past that have so far been concealed.

Japan’s Russia is not just a historical phenomenon, then. “Japan’s Russia,” as it is conceived in this volume, is a methodology of reading cultural production beyond East and West through its diverse medial transmissions and temporal and spatial displacements in a global setting. The circulations of knowledge introduced in this volume were facilitated by unofficial networks, elusive personal encounters, and biographical contingencies of actors on the non-state and even underground level, who often found themselves at odds with the geopolitical schemes of their times.

"Japan’s Russia is a formidable force in comparative literature and transnational intellectual history. Olga Solovieva and Sho Konishi bring together literary scholars, film experts, historians, and anthropologists from all over the world to brew this truly exceptional interdisciplinary volume on Japanese-Russian cultural interaction. If one is looking for a well-structured collection of historical investigations and textual analyses of Japanese reception of Russian culture, this book is certainly a must-read. However, Japan’s Russia is more ambitious than this. Besides the fascinating stories behind Japanese Tolstoyism, Tarkovsky-inspired Japanese music, and the Japanese resonance with Alexievich’s nuclear trauma narrative, this volume of fourteen case studies spanning from late nineteenth-century tanka to contemporary cinema timely reconsiders an array of fundamental methodological issues in the comparative study of culture and history. The contributors to this volume collectively rewrite the narrative of Japan’s modernization by restoring the critical role Russian culture played in this process [...and] effectively destabilize the Westcentrism that is deeply rooted in the critical paradigm for area studies, comparative literature, and global history." —Russian Review

"Japan’s Russia is a valuable resource in the field of modern Japanese history because it provides a critical narrative that challenges the dominant 'East-West-binary-based paradigm,' which sees only Western Europe and the United States as the determinant 'Other' of Japanese modernity. The authors present a wide range of case studies that bring forth the longue durée of interaction between Russia and Japan, particularly via the profound influence of the Narodniks, the late nineteenth-century Russian intelligentsia who promoted progressive cosmopolitanism and search for democracy. A major underlying theme of many chapters is the Japanese deep appreciation for and adaptation of Tolstoy's anti-statist anarchist cosmopolitanism, which inspired the rediscovery/invention of the Japanese turn to the countryside to establish the modern culture of mutual help and cooperative organizations. This book is a significant contribution to the new trend in the study of modern Japanese history that brings together geographies, peoples, and cultures and in so doing constructs a transnational and global historical narrative for modern Japan." —Selcuk Esenbel, Professor of History and Director of the Asian Studies Center, Bogazici University

"Japan’s Russia presents a reinterpretation of modern Japanese culture and society by focusing on the Russia-Japan relationship. Building on Sho Konishi’s earlier and important rethinking of visions of modernity in the early twentieth-century Russia-Japan relationship, this book expands the horizons by exploring a range of literary, artistic, intellectual, and political encounters. It also extends the timeframe from the late nineteenth century to the present day, offering fascinating and important insights." —Tessa Morris-Suzuki, Professor Emerita of Japanese History, Australian National University

"Premised on the multidirectionality of influence, Japan's Russia introduces readers to myriad currents in intellectual and cultural interactions between Japan and Russia, from literature to religion, ethnography to anti-nuclear activism. Solovieva and Konishi have made a space for topics and issues that have no home in fields defined by states and traditional disciplines. Their proposition of 'Japan's Russia' as not just a theme but a method will be provocative for anyone investigating culture and thought across borders. The chapters are impressive in their range and together create a multilayered, fine-grained history of interactions between artists, intellectuals, religious leaders, and other figures from Russia, Japan, China, and several more countries in the twentieth century, extending briefly into the twenty-first." —Christopher Hill, Associate Professor of Asian Languages and Cultures, University of Michigan

Olga V. Solovieva is Assistant Professor in Comparative Literature at the University of Chicago.

Sho Konishi is Associate Professor in Modern Japanese History at the University of Oxford.

Ariel Acosta is Lecturer at the Global Studies in Japanese Cultures Program at Waseda University.

Elma Hoffman studies Art History and Religious Studies at the University of Chicago.

Chelsea Hudson is a PhD Candidate in History at Georgetown University.

Andrew Way Leong is Assistant Professor of English at the University of California, Berkeley.

Charles Lock is Professor of English Literature at the University of Copenhagen.

Dominic Martin is Postdoctoral Research Associate and Lecturer in Russian Studies and Anthropology at the Macmillan Center for International and Area Studies, Yale University.

Igaue Naho is Professor of Russian Studies and Cultural Anthropology in the Faculty of Policy Studies at Chuo University, Tokyo.

Takashi Nishiyama is Associate Professor of History at the State University of New York, Brockport.

Haun Saussy is University Professor in Comparative Literature, East Asian Languages and Civilizations and Committee on Social Thought at the University of Chicago.

Erin Schoneveld is Assistant Professor of East Asian Languages and Cultures and Director of the Visual Studies Program at Haverford College.

Lu Tian is a PhD candidate in Modern Japanese History at the University of Oxford.

Larisa Usmanova is Associate Professor in the Centre for Oriental Philosophy at the Russian State University for Humanities in Moscow and Senior Researcher at the Mardjani Institute of History of the Academy of Sciences in the Republic of Tatarstan.

Nadine Willems is Lecturer in Modern Japanese History at the University of East Anglia.

Chapter 2. Journeys to the North: “Chekhovian Undercurrent” in Japanese Poetry of the 1920s (Nadine Willems)

Chapter 3. “Our Humanitarian Obligation”: Bronislaw Pilsudski and Oyabe Jenichiro on Ainu Welfare and Self-Determination in Russia and Japan (Chelsea Hudson)

Chapter 5. The Russia of the Shirakaba Group: Tolstoy in a Japanese Vision of Social Modernism (Erin Schoneveld)

Chapter 6. A Quest for Meaningful Living: Japanese Tolstoyans and the Idea of Seikatsu (Ariel Acosta)

Chapter 11. Reopening the “Great Gate of Kiev” in Kurosawa’s No Regrets for Our Youth (Olga V. Solovieva)

Chapter 14. A Symphony of Concessions: Cables, Railroads, Orthodoxies in Harbin and Beyond (Charles Lock)