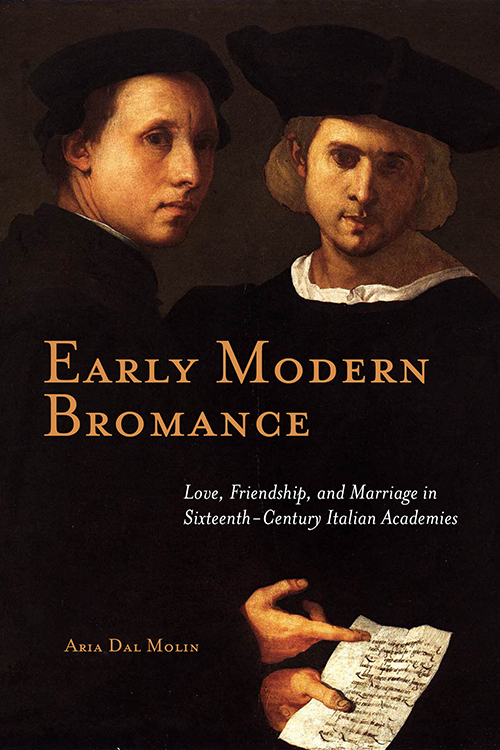 "A truly groundbreaking book of exceptional interest and potentially long-lasting importance for cultural studies on both sides of the Atlantic. Providing new insights ... this interdisciplinary and highly readable study is a most welcome one." —Eric Nicholson, Faculty Member, New York University Florence

The early theatrical form of the Italian bromance was the product of a particularly fruitful literary period in sixteenth-century Siena influenced by Renaissance humanism and the Age of Criticism. The focus on humanism led to Italian literary academies dedicated to the contemplation of man, his place in society, and his interpersonal relationships. In early modern Italy, the swift transition for a young man from a liberal period of male-male experimentation to married adulthood, as well as unhappiness with arranged marriages, fostered philosophical and theoretical debates designed to resolve conflicts between the individual desires of men and the constraints of compulsory wedlock. The growth in humanistic studies in early modern Italy further heralded a revival of the classical discourse of amicitia perfecta (perfect friendship), which led to an interest in classical lifestyles and philosophical debates contemplating how a man should interact in his friendships and his courtships. In addition to treating themes of love, marriage, and family, the popular literary genre—trattati d’amore (treatises on love)—sought to define the love felt between men. The relative freedom in Pre-Tridentine Italy to contemplate alternative relationships between men led to the creation of the early modern bromance.

This book resituates the contemporary genre of the bromance, as well as its surrounding cultural discourse, in the theatrical practices of early-sixteenth-century Italian academies, revealing how a group of early modern Italian academicians institutionalized alternative friendships between men to prolong male bonding.

This study combines New Historicism with Queer Theory and scholarly discourse on film to analyze the early modern influences on the performative practices of masculinity and male friendships in the bromance of contemporary film, television, and media. This book therefore analyzes the lives and friendships of young Italian members of the early-sixteenth-century Accademia degli Intronati and their public theatrical performances that displayed homosocial triangles using women to strengthen the bonds between men, by referring to the work of Claude Lévi-Strauss, Gayle Rubin, and Eve Kosofsky Sedgwick. Taking a new approach to the homosocial triangle, this theory is further applied to theoretical discourses of perfect friendship (amicitia perfecta) as exemplified through the academy members testing its boundaries through narrative and performance. Ultimately, this book newly reveals how early modern Italian bromance narratives interrogate alternative roles of close male friendships, the love between men, and the confines of marriage, thus providing the foundation for the contemporary bromance.

"Early Modern Bromance is a truly groundbreaking book of exceptional interest and potentially long-lasting importance for cultural studies on both sides of the Atlantic. With bold originality as well as scholarly acumen, Aria Dal Molin focuses on the activities of prominent Italian male academies, especially in Cinquecento Siena, and compares their unconventional, sexually daring scripted comedies to 'bromantic' American films and television series of the 1980s–2010s. Providing new insights into revealing parallels and differences between performance contexts across two continents and five centuries, this interdisciplinary and highly readable study is a most welcome one." —Eric Nicholson, Faculty Member, New York University Florence

"This well-organized study is an innovative work that will find some very interested readers. The arguments throughout the whole book are very good. In particular, the discussion of the Sacrificio is very persuasive and includes excellent observations on its reworkings of Petrarch." —Janet Smarr, Professor of Theater, Department of Italian Studies, University of California San Diego

"Early Modern Bromance is a compelling scholarly work, examining Gli Ingannati from multiple angles and providing a refreshing, instructive explication of contemporary bromance. The book opens with a thorough critical survey of ideas of friendship that covers the three periods in European cultural history most pertinent to its central subject: classical, medieval, and early modern. The study’s most outstanding accomplishment is its reconsideration of Gli Ingannati by the Accademia degli Intronati di Siena in the light of its relevant paratexts, the Comedia del Sacrificio degli Intronati di Siena and the Prologue to the Ingannati comedy. The thorough commentary on these last two texts gives this study special traction as historical scholarship. Early Modern Bromance returns this play to the cultural moment of its creation as a dramatic work via essential texts that have long been overlooked and gives us further understanding of this play in its historical context by acknowledging the effects of the Sack of Rome in 1527 and subsequent Italian Wars as predicates of the Academic movement’s increasing appeal in general, as well as the founding of a particular academy in a specific place, the Accademia degli Intronati di Siena. Detailed research into the Accademia’s charter, its membership, its emblem, and the architecture of its theater all give this work exceptional scholarly authority. Moreover, the way that film studies and other disciplines inform and enhance this scholarly work compounds its significance and adds to its relevance to classroom teaching and contemporary debates over marriage and relations between the sexes." —Lawrence Rhu, Distinguished Professor Emeritus, English Language and Literature, University of South Carolina

Chapter 2. The Question of Eros in Early Modern Perfect Friendship

Chapter 6. "I'd Marry you if you were a girl": Dramatizing Discourses of Ideal Male Friendship