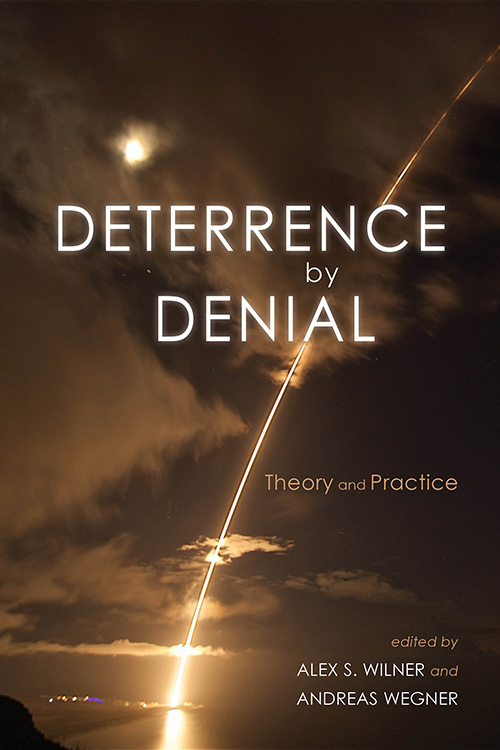 Deterrence by Denial: Theory and Practice by Alex S. Wilner and Andreas Wenger

“Alex Wilner and Andreas Wenger have assembled a stellar collection of contributors for a timely and penetrating examination of a form of deterrence that has never got the attention it deserves, because of the focus on punitive nuclear deterrence, yet has much wider strategic applications.” —Sir Lawrence Freedman, Emeritus Professor of War Studies, King's College London

Deterrence theory helps conceptualize how threats can be used and communicated to influence or alter an adversary’s behavior. In practice, deterrence works by weighing on an actor’s perceived costs and benefits of pursuing an unwanted action. Deterrence—and its close relatives, coercion, compellence, dissuasion, and influence—can be accomplished by using threats of punishment (i.e., retaliation) or by denying adversaries the gains they seek (i.e., defense, resilience, and failure). During much of the Cold War deterrence by punishment largely overshadowed deterrence by denial. The proliferation of nuclear weapons, and later, of missile technology, tipped the deterrent calculus in favor of retaliation: the ultimate weapon epitomized the ultimate deterrent. Deterrence by denial largely fell to the wayside as a result and the logic of punishment came to pervade the classical literature on deterrence theory. Contemporary security dynamics, however, have changed dramatically. Security concerns are increasingly sub- and non-state in nature, and they are much more diffused. While nuclear weapons and deterrence by punishment still matter, the rise of sophisticated international terrorist organizations, conventional military challenges, digital-based threats, and threats short of open conflict have today cumulatively tipped the deterrent calculus in favor of denial.

Deterrence by denial reduces the perceived benefits an action is expected to provide an adversary. Decision making takes into account both costs and benefits, so while punishment manipulates behavior by augmenting costs, denial works by stripping away benefits. Unfortunately, given the field’s longstanding focus on deterrence by punishment, very little research has systematically explored denial theory and strategy in contemporary security settings. And the limited denial scholarship that does exist rests largely on the dynamics inherent to the Cold War, like great power rivalry, strategic weapons, and military power. Deterrence by Denial: Theory and Practice is the first study to focus exclusively on contemporary denial, bridging the theoretical gap that persists between classical deterrence theory and contemporary insecurity. The book significantly advances the scholarship on deterrence by denial with empirically driven and policy-relevant contributions written by leading international scholars of conventional military aggression, missile defense, terrorism and militancy, crime, and cybersecurity.

Deterrence by Denial: Theory and Practice is an important and unique book, of interest to scholars of international relations, political science, terrorism and intelligence studies, and cybersecurity, as well as to policy analysts, practitioners, and members of the armed forces and intelligence community.

“Alex Wilner and Andreas Wenger have assembled a stellar collection of contributors for a timely and penetrating examination of a form of deterrence that has never got the attention it deserves, because of the focus on punitive nuclear deterrence, yet has much wider strategic applications.” —Sir Lawrence Freedman, Emeritus Professor of War Studies, King's College London

"Fresh thinking on deterrence is a rarity, but there is a great deal of it in this timely and important new volume. In exploring the fit of deterrence strategies with 21st-century conflict, the authors make a strong case for the rising salience of deterrence by denial in the overall mix. Scholars and practitioners alike will find good value in the insights uncovered here." —Brad Roberts, Director of the Center for Global Security Research, Lawrence Livermore National Laboratory

“This is an excellent volume of impressive distinct chapters that come together to make up a formidable study that succeeds in its purpose, which is to present and analyze the concept of 'deterrence by denial' in theoretical, conceptual, and empirical terms. The book is extremely well organized and the chapters flow naturally. Timely and relevant, this book makes a unique, important contribution.” —David W. Kearn, Jr, St. John’s University, and author of Reassessing U.S. Nuclear Strategy

“The editors of this volume have enlisted a superb cast of deterrence experts to discuss the rising importance of deterrence by denial in the 21st century. The proliferation of modern technologies and the diminished credibility of America's Cold War threat of deterrence by punishment have created a world in which defense, resilience, and denial have returned to the forefront of military strategy. This book serves as an important update to the classic works on deterrence theory and practice.” —Jeffrey Larsen, Research Professor, US Naval Postgraduate School

"This volume provides a long overdue exploration of deterrence by denial, which has always received less attention than deterrence by punishment. Wilner and Wenger have assembled an A-list of experts to advance our understanding of deterrence by denial. The contributors address the history and theory of denial approaches and consider possible applications to efforts to counter threats ranging from conventional aggression to terrorism to cyberattacks. The book does not overhype denial, but rather takes note of possible limitations to this strategy. The volume makes a welcome addition to ongoing efforts to adapt deterrence to help address contemporary security threats." —Jeffrey W. Knopf, Professor of Nonproliferation and Terrorism Studies, Middlebury Institute of International Studies at Monterey

Andreas Wenger is Professor of International and Swiss Security Policy at ETH Zurich and Director of the Center for Security Studies, Zurich, Switzerland.

Dmitry (Dima) Adamsky is Professor at the School of Government, Diplomacy and Strategy at the IDC Herzliya University, Israel.

Janice Gross Stein is the Belzberg Professor of Conflict Management in the Department of Political Science and Founding Director of the Munk School of Global Affairs and Public Policy, University of Toronto, Canada.

Ron Levi is Associate Professor in the Munk School of Global Affairs & Public Policy and the Department of Sociology, University of Toronto, Canada.

Martin Libicki is Keyser Chair of Cybersecurity Studies at the US Naval Academy, Annapolis, USA.

Patrick M. Morgan is Professor of Political Science at the University of California, Irvine, USA.

John Sawyer is Director of Strategic Research Initiatives at the University of Maryland, USA.

James J. Wirtz is Dean of the School of International Graduate Studies, and Professor with the Department of National Security Affairs, at the Naval Postgraduate School, Monterey, USA.

Part I: Denial in Theory

Chapter 1. Deterrence by Denial from the Cold War to the 21st Century (Patrick M. Morgan)

Conclusion: Into the Next Century—The Changing Theory and Practice of Denial ( Andreas Wenger and Alex Wilner)