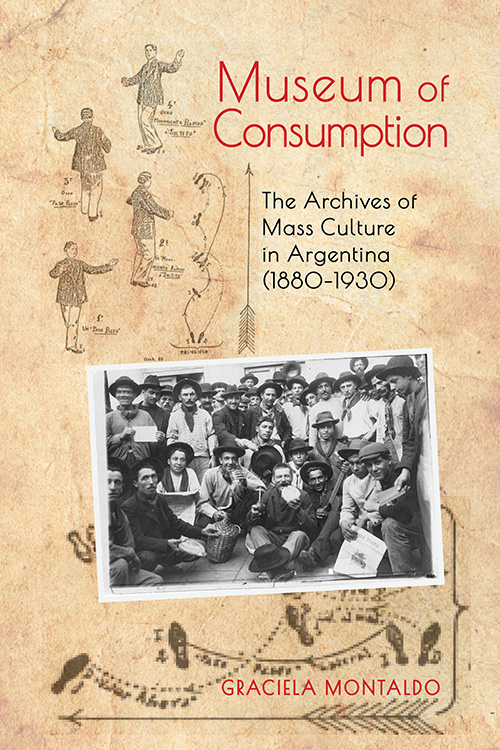 Museum of Consumption: The Archives of Mass Culture in Argentina (1880–1930) by Graciela Montaldo

“This is one of the most exciting books of cultural criticism I have read in recent years. In a dazzling display of erudition, archival research, and theoretical sophistication, Graciela Montaldo redefines our understanding of urban culture, consumption, and taste as she probes the constitution of mass subjects at the intersection of varied experiences and practices.” —Diana Sorensen, Harvard University

At the turn of the nineteenth century, Argentina lived a process of accelerated modernization. To understand the beginnings of mass culture and mass cultural experiences (between 1880 and 1930), it becomes necessary to examine a variety of phenomena that combine modern forms of access to public space with the creation of new cultural contents. That was the period of the democratic political reforms, urban redesign, the rise of immigration rates, the economic growth, and the articulation of nationalist ideologies. Culture (elite, popular, and mass culture) played a major role in the context of deep social and political transformations. New phenomena profoundly affected the social life: popular spectacles, mass consumption, the variety shows, theatres, the circus, as well as the connections between these forms and the avant-garde of the 1920s. Coincidentally, the appearance and success of tango music and dancing, and the relationship between tango and masculine violence and the political violence of the early twentieth century are interconnected practices. Tango, a cultural export to Europe and the US, played a central function in redefining gender and class roles. Finally, the notions of good and poor taste as cultural and political experiences that define citizenship through fashion, the role of aesthetics in social life, and the dissemination of scientific and sociological knowledges introduce a complex scale of cultural practices

Museum of Consumption: The Archives of Mass Culture in Argentina (1880–1930) is a study of the emergence of mass culture in modern Argentina. The book examines the tensions of this modern culture subject to the pressures of the market and politics. The book also traces the emergence of a cultural scene that constructed a frontier between elite and mass cultures during the modernization process. It was, however, a highly porous frontier: the reduced size of the cultural field meant that the same actors worked on both sides. If common sense would have it that the lower sectors imitate and copy elite culture, this book argues the opposite, demonstrating how plebeian productions impacted and radically transformed lettered culture.

The book, therefore, takes a novel approach, viewing mass culture not as a series of case studies but rather as processes of cultural production and circulation. To this goal, the book focuses mainly on tango, circus, and fashion productions. This study belongs to the field of cultural studies. It lies at the intersection of numerous theoretical approaches such as theory of the masses, studies of consumer culture, modernity and modernism, intellectual history, gender studies, and theories of spectacle. Its singular archive was constructed especially for this book and includes memoirs, chronicles, testimonies, essays, and fictions, all of which it places into dialog with canonical texts.

Museum of Consumption: The Archives of Mass Culture in Argentina (1880–1930) is an important transdisciplinary book for Latin American cultural studies and history collections.

“This is one of the most exciting books of cultural criticism I have read in recent years: it will interest scholars and students alike, redefining the archive through which politics and cultural practices are studied. Tracing the fascinating ways in which the emergence of the masses in late-nineteenth-century Buenos Aires resignified symbolic and political interactions, Graciela Montaldo throws new light on canonical works in juxtaposition with forms of popular spectacle embodied in the circus and emerging forms of the culture industry such as early cinema, variety shows, and magisterial lectures managed by impresarios as new cultural agents. Her study of tango will become the essential source for an up-to-date understanding of upper-class consumption and appropriation of a plebeian cultural practice in which class, gender, and urban violence are conjoined. In a dazzling display of erudition, archival research, and theoretical sophistication, Graciela Montaldo redefines our understanding of urban culture, consumption, and taste as she probes the constitution of mass subjects at the intersection of varied experiences and practices.” —Diana Sorensen, James F. Rothenberg Professor of Romance Languages and Literatures (Spanish) and Professor of Comparative Literature, Harvard University

"Museum of Consumption is not only an innovative reading of cultural practices, urban characters, and symbolic and political exchanges in turn-of-the-century Buenos Aires but also an invitation — at times, a very thought-provoking one — to think about the beginnings of mass culture as a much earlier urban phenomenon than previous scholarship suggests. Examining the circus, tango, theater, radio broadcasting, and early cinema; the compadrito, the niño bien, and the prostitute; bad taste and social contamination, Montaldo delves with a fine critical gaze into an array of social processes saturated by unstable and changing cultural values." —Professor Diego Armus, History Department, Swarthmore College

Graciela Montaldo is a Professor of Latin American studies at Columbia University. She specializes in modern Latin American Culture with a focus on contemporary cultural practices. She is coeditor of The Argentina Reader: History, Culture and Politics. She has published Rubén Darío: Viajes de un cosmopolita extremo (2013), Zonas Ciegas: Populismos y experimentos culturales en Argentina (2010), and A propriedade da Cultura (2004), among other books.