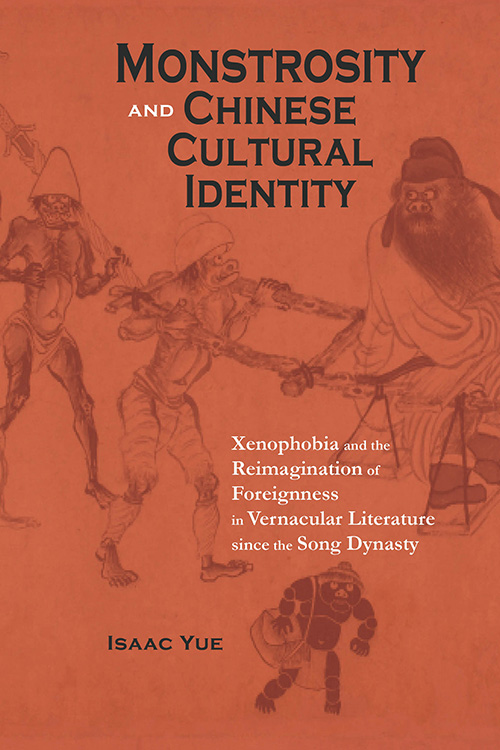 Monstrosity and Chinese Cultural Identity: Xenophobia and the Reimagination of Foreignness in Vernacular Literature since the Song Dynasty by Isaac Yue

"Using selected key figures from Chinese literature from the Tang through the Qing, Isaac Yue traces the increasing attribution of monstrous qualities to foreigners as a means to demean the Other while inflating the stature of Chinese cultural identity. Yue’s sharp observations on the evolving images of Zhang Fei, Sun Wukong, and Zhong Kui will surely inspire a reevaluation of the cultural relevance of the texts in which these figures appear." —Robert E. Hegel, Washington University in St. Louis

This book examines the interconnection between the idea of monstrosity and the emergence of Chinese cultural identity since the Song dynasty. Using four case studies on the developmental history of the fox demon, Zhang Fei, Sun Wukong, and Zhong Kui in vernacular literature, it explores how monstrosity, through its traditional connection to foreignness, played a crucial role in shaping society’s idea regarding the self/other dichotomy.

Chinese vernacular literature matured during the Southern Song period and coincided with society’s growing apprehension of foreignness. As society’s perception of the other fluctuated between acceptance and abhorrence following the Mongolian conquest of the Middle Kingdom and the subsequent political desire to return to a fixation with the concept of Han during the Ming dynasty, the idea of monstrosity was adopted by these works as a logical vessel for contemplating the question of identity. Unlike other forms of written work in China, vernacular literature developed out of the necessity to cater to the mass. As such, they provide a unique window to understand society’s reaction to the cultural and political milieu of the time.

By resituating the production of these works within this cultural backdrop, the importance of this study lies both in the foregrounding of the manifestation of Chinese cultural identity in the literary and the proposition of its importance to our understanding of the cultural politics since the Song dynasty.

Although academics have long been aware of the importance of the cultural milieu of the Song-Yuan-Ming period to the development of Chinese cultural identity, there remains a lack of attention to the evolution of this identity during this time. The aim of this book is to explore the way cultural identity is encapsulated by the idea of monstrosity and how vernacular literature offers a window into society’s continuous attempt to redefine this concept, in response to a shifting political landscape. But beyond its timely discussion of the background and historical genealogy of how Chineseness is conceptualized, this book specifically addresses the effect of the contentiousness of ethnicity on the identity question. In doing so, it explores how this gradual historical transformation of Chinese cultural identity is closely tied to xenophobia and the reimagination of foreignness as reflected in the idea of monstrosity.

"Using selected key figures from Chinese literature from the Tang through the Qing, Isaac Yue traces the increasing attribution of monstrous qualities to foreigners as a means to demean the Other while inflating the stature of Chinese cultural identity. Yue’s sharp observations on the evolving images of Zhang Fei, Sun Wukong, and Zhong Kui will surely inspire a reevaluation of the cultural relevance of the texts in which these figures appear." —Robert E. Hegel, Washington University in St. Louis

"Working with a range of literary material from the mediaeval to early modern periods, this book deftly explores the evolving and changing nature of ‘foreignness’ and provides insight into how peoples in the past constructed and understood not only others’ but also their own shared identities. By taking a multifaceted approach, Yue demonstrates how these understandings intersect with not only the human but also the animal and extrahuman. Yue has produced a pivotal work in the exploration of identity in China’s past." —Justin Winslett, University of Sheffield

"Monstrosity and Chinese Cultural Identity is a daring attempt to unearth Chinese modes of creating 'otherness' in terms of deviance and monstrosity, by focusing on three important figures: Zhang Fei, Sun Wukong, and Zhong Kui. Professor Yue carefully examines how new cultural images of these figures are recreated in the Late Tang and Song era by domesticating their wild and unruly nature and by appropriating their bestial and foreign countenances. He examines how traditional Confucian thought and the folk tradition negotiate between a rising xenophobic sentiment in the Southern Song and beyond and the popularity of foreign-looking or bestial heroes." —Stephen West, Arizona State University

"An original, daring reappraisal of the 'ugly hero' in Chinese fiction, this book should be especially commended for its subtle retelling of the evolution of Three Kingdoms General Zhang Fei, from early portrayals of him as being able to wield the calligrapher’s brush as well as the sword, to the brave but stupid and ugly companion of Liu Bei and Guan Yu. I particularly appreciated Yue’s hypothesis about the possible role of Yuan drama in this evolution. I was also persuaded by Yue’s reading of Sun Wukong’s duality. Through close readings of poetry, essays, drama, and novels, this book offers us a fine and original appraisal of the late imperial development in the classical opposition between civil talent (wen) and martial skills (wu) in Chinese culture, at a time of renewed confrontations between Han Chinese and barbarian outsiders." —Vincent Durand-Dastès, Institut national des langues et civilisations orientales (Inalco, Paris)

Isaac Yue is Associate Professor of Chinese at the University of Hong Kong. He is the author of Translating Culture: Late-Victorian Literature into Chinese and coeditor of Scribes of Gastronomy: Representations of Food and Drink in Imperial Chinese Literature.

Chapter 2. Bestiality and brutality: The imagination of foreigners as uncivilized animals

Chapter 3. The barbarian and/as the hero: The case of Zhang Fei

Chapter 4. The taming of the ape: A Chinese sutra

Chapter 5. An animalistic warrior? A demon-vanquishing scholar? The two faces of Zhong Kui