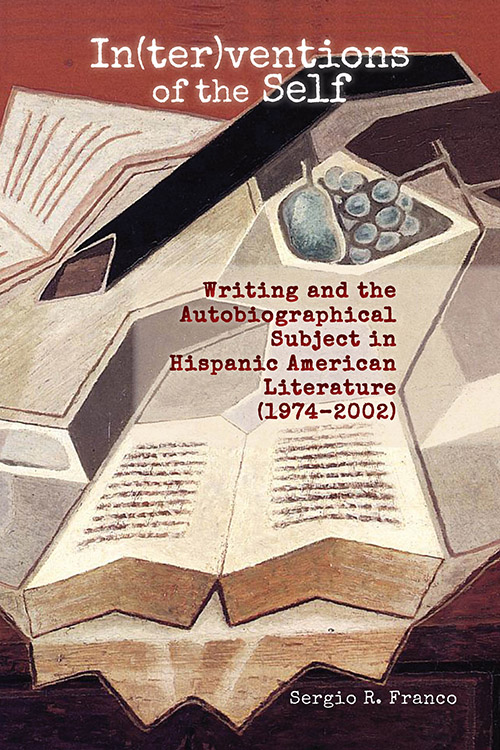 In(ter)ventions of the Self: Writing and the Autobiographical Subject in Hispanic American Literature (1974–2002) by Sergio R. Franco

"This book is both an insightful theoretical intervention in critical discussions of the autobiographical genre and a highly original analysis of the autobiographies of five giants of Latin American literature ... Sergio Franco teaches us to read autobiography in new and productive ways, ... providing a valuable framework for future studies." —Anne Lambright, Carnegie Mellon University

This book is in the Cambria Latin American Literatures and Cultures Series headed by Román de la Campa, the Edwin B. and Lenore R. Williams Professor Emeritus of Romance Languages at the University of Pennsylvania.

This book is the first to incorporate close readings and analyses of the autobiographical texts of five canonical writers (including three Nobel Prize winners): Gabriel García Márquez, Margo Glantz, Pablo Neruda, Severo Sarduy, and Mario Vargas Llosa. The study's novelty lies in its examination of a corpus that has never before been systematically studied.

In(ter)ventions of the Self focuses on the examination of notions of subjectivity, identity, truth, verisimilitude, race, gender, ideology, image, memory, body, and eroticism as they are represented in the symbolic space of the autobiographical discourse of these authors. The text strives to capture the characteristic traits of these authors’ self-representation during the period beginning with the 1974 publication of Pablo Neruda’s Confieso que he vivido to 2002, when García Márquez’s Vivir para contarla was published. These dates correspond both to the increase in the production of autobiographical texts in Hispanic America as well as to the shift from a modern to a postmodern sensibility. This book thus examines the Hispanic American autobiographical discourse in terms of the invalidation or problematization of the great metanarratives of progress and liberation, the debilitation of the political, the emergence of marginal and marginalized subjectivities, an increased ecological consciousness, the climax of a social trend towards the visual and the spatial, as well as the vindication of intimism and the value of sensitivity and everyday socialities.

This book will be a valuable resource for literary scholars and graduate students specializing in the study of the writers examined, historians and cultural critics studying contemporary Latin America, and specialists in autobiographies and memoirs.

"In(ter)ventions of the Self is both an insightful theoretical intervention in critical discussions of the autobiographical genre and a highly original analysis of the autobiographies of five giants of Latin American literature. This study challenges many prevailing notions of the genre while expounding on autobiography’s discursive possibilities and broader social implications. Most meaningfully, Sergio Franco teaches us to read autobiography in new and productive ways, through identifying moments of narrative discord or disruption that reveal the full complexities of the texts he examines, thus providing a valuable framework for future studies." —Anne Lambright, Department Head and Professor of Hispanic Studies, Carnegie Mellon University

"Lucid, illuminating, exemplary, invaluable. Sergio Ramírez Franco has not only read everything important both about theories of autobiography and about his five shrewdly chosen and convincingly representative authors; in this brilliant, magisterial book, he has also meshed theory with critical practice in a way that few academic critics could hope to match. In doing so he shows how a hitherto peripheral area of interest can become crucially relevant to literary studies as a whole. Readers will emerge from their engagement with this dazzling work with new insights about the lives of the writers studied, the nature of their works, the theory and practice of autobiography in general, the history of Latin American literature, and indeed the history of Latin America itself." —Gerald Martin, Professor Emeritus, Hispanic Languages and Literatures, University of Pittsburgh

”This is an excellent and exciting book. It makes a significant contribution to the field, and its analytical turns are tied together by engaging storytelling. It is at once a significant deconstructive critique of the autobiographical genre in Latin American writing, and also a useful history of the signature modern era of that body of work, the so-called ‘Boom’ generation.” —Joshua Lund, Associate Professor of Spanish, University of Notre Dame

Chapter 1. History and Nature in Confieso que he vivido by Pablo Neruda

Chapter 4. Mystic and Machine in the “Autorretratos” of Severo Sarduy