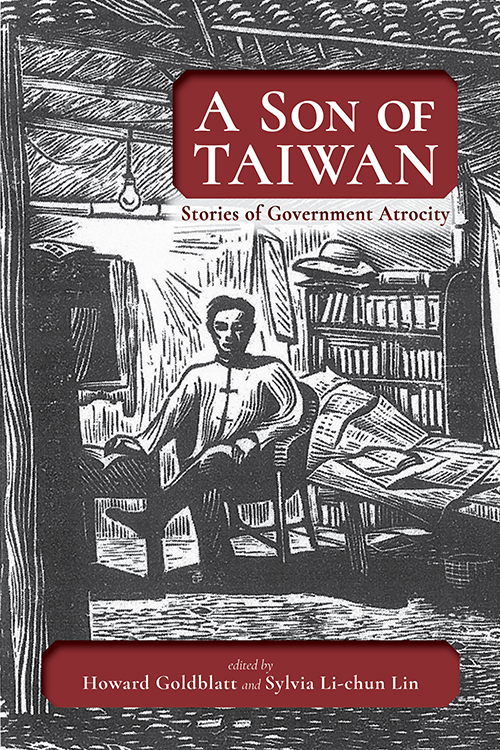 A Son of Taiwan: Stories of Government Atrocity by Howard Goldblatt and Sylvia Li-chun Lin

The pernicious effects of the White Terror in Taiwan went beyond actual acts of atrocity, as the citizens practiced self-censorship and passed their fears on to the next generation. For many years, this part of Taiwan’s past was talked about, if at all, with circumspection as the overriding principle. Literary representations often employed obscure references, which themselves could get the writers into serious trouble, or worse. The stories in this collection, though fictional in nature, expand our understanding of Taiwan’s postcolonial history and extend our memory of the past, in Taiwan’s pursuit of transitional justice.

On February 28, 1947, a widow selling cigarettes on the street in Taipei was brutally beaten by government agents searching for contraband cigarettes. When a crowd gathered, shots were fired and a bystander was killed. Island-wide demonstrations prompted the Chiang Kai-shek government to send reinforcements from China. Upon arrival, the troops opened fire, killing thousands. The massacre was followed by large-scale arrests of anyone suspected of sedition or Communist associations, all in the name of national security. Martial law was declared and not lifted until 1987.

What happened in 1947 is known as the 2/28 Incident, which led to a four-decade-long suppression of dissent, encroachments upon civil liberties, and the wholesale violation of human rights, all subsumed under an era referred to as White Terror. Its pernicious effects went beyond actual acts of atrocity, as the citizens practiced self-censorship and passed their fears on to the next generation. For many years, this part of Taiwan’s past was talked about, if at all, with circumspection. As evidenced in this collection, literary representations often employed obscure references, which themselves could place the writers in serious jeopardy. Despite, or because of, differences in approach, these writers keep memories alive to ensure that the past is neither forgotten nor repeated.

In many ways, Taiwan presents a compelling example of how autocratic regimes impose their will on a population, often as colonial overlords. A peaceful island peopled by Austronesians and ethnic Chinese, rich in agricultural output, has been a geopolitical pawn in recent history, first by the Japanese and then the defeated regime of Chiang Kai-shek in China. Parallels throughout the world are not difficult to find. Now that Asia’s preeminent democracy has created a political and cultural milieu in which Taiwanese no longer have to tiptoe around sensitive topics, much historical research has been undertaken on this turbulent period, the results published and widely read. In presenting multiple perspectives from various ethnic groups that call Taiwan their homeland, the stories in this collection can expand our understanding of Taiwan’s post-colonial history and extend our memory of the past, in Taiwan’s pursuit of transitional justice.

This collection will be of interest to general readers as well as classes dealing with fictional re-creation of government atrocity.

This book is part of the Cambria Literature in Taiwan Series, in collaboration with the National Museum of Taiwan Literature, the National Human Rights Museum, and National Taiwan Normal University.

Howard Goldblatt is Emeritus Professor of East Asian Languages at the University of Colorado, subsequently Research Professor at the University of Notre Dame. A Guggenheim Fellow and founding editor of the journal Modern Chinese Literature, he has received honorary degrees from Hong Kong and British universities. Author or editor of more than a dozen books, in Chinese and English, he is the translator of more than fifty Chinese-language books, including ten by the 2012 Nobel Laureate Mo Yan, and two winners of the Asian Booker Prize. He has co-translated nearly two dozen with Sylvia Li-chun Lin, one the winner of the Asian Booker, another recipient of the Translation of the Year Award from the American Literary Translators Association. He has published a collection of flash fiction entitled A Night in a Chinese Hospital.

Sylvia Li-chun Lin, a native of Tainan, Taiwan, earned a doctoral degree in Comparative Literature from the University of California at Berkeley. She was Associate Professor of Chinese at the University of Notre Dame before resigning to become a full-time translator and writer. Author of Representing Atrocity in Taiwan: The 2/28 Incident and White Terror in Fiction and Film, she is professionally and personally invested in fictional works dealing with this part of Taiwan’s past. She coedited Documenting Taiwan on Film: issues and Methods in New Documentaries.

6. "Cruelty of the City" by Walis Nokan (translated by Edward Vickers)

About the Editors and Translators