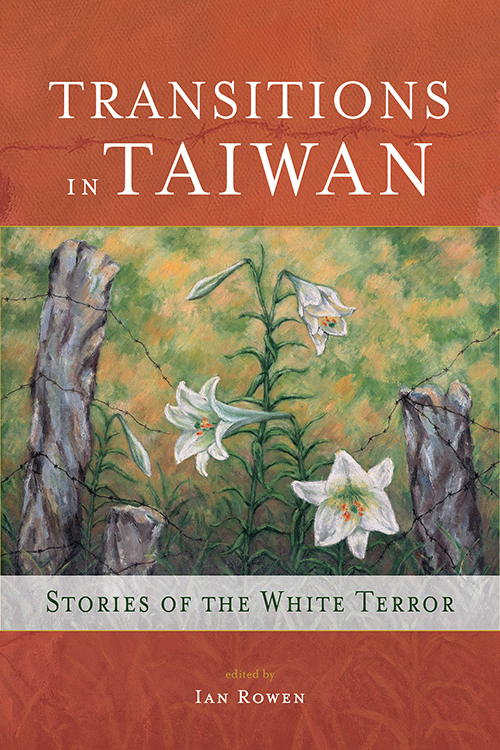 Transitions in Taiwan: Stories of the White Terror by Ian Rowen

"Transitions in Taiwan is a literary exploration of the forty violent years during which the Taiwan people were ruled by an authoritarian power. The seven carefully selected and beautifully translated stories in this volume, in addition to presenting to the English readership some of the country’s best literary talent, offer an invaluable glimpse into a difficult part of Taiwan’s history, while reflecting on the possibilities for its imaginative reconfigurations by means of fiction." —Asian Review of Books

Taiwan’s peaceful, democratic society is built upon decades of authoritarian state violence with which it is still coming to terms. At the close of World War II in 1945, after fifty years of Japanese colonization, Taiwan was occupied by the Chinese Nationalist Party (KMT). The party massacred thousands of Taiwanese while it established a military dictatorship on the island with the tacit support of the United States.

Although early episodes of state violence (such as the 228 Incident in 1947) and post-1980s democratization in Taiwan have received a significant amount of literary and scholarly attention, relatively less has been written or translated about the four-decade period known as the White Terror, which began right after the 228 Incident and continued until the end of martial law in 1987. The White Terror was aimed at eliminating alleged proponents of Taiwanese independence as well as supposed communist collaborators, and it wiped out an entire generation of intellectuals. Both native-born Taiwanese as well as mainland Chinese exiles were subject to imprisonment, torture, and execution. During this time, the KMT institutionally favored mainland Chinese over native-born Taiwanese and reserved most military, educational, and police positions for the former. Taiwanese were forcibly “reeducated” as Chinese subjects. China-centric national history curricula, forced Mandarin-language pedagogy and media, and the renaming of streets and public spaces after places in China further enforced a representational regime of Chineseness to legitimize the KMT’s authority.

Taiwan’s contemporary commitment to transitional justice and democracy hinges on this history of violence, for which this volume provides a literary treatment as essential as it is varied. This is among the first collections of stories to comprehensively address the social, political, and economic aspects of the White Terror and to do so with deep attention to its transnational character. Featuring contributions from some of Taiwan’s most celebrated authors and from genres that range between realism, satire, and allegory, this book examines the modes and mechanisms of the White Terror and party-state exploitation in prisons, farming villages, slums, military bases, and professional communities.

Transitions in Taiwan: Stories of the White Terror is an important book for Taiwan studies, Asian Studies, literature, and social justice collections.

This book is part of the Cambria Literature from Taiwan Series, in collaboration with the National Museum of Taiwan Literature, the National Human Rights Museum, and National Taiwan Normal University.

"Transitions in Taiwan is a literary exploration of the forty violent years during which the Taiwan people were ruled by an authoritarian power. The seven carefully selected and beautifully translated stories in this volume, in addition to presenting to the English readership some of the country’s best literary talent, offer an invaluable glimpse into a difficult part of Taiwan’s history, while reflecting on the possibilities for its imaginative reconfigurations by means of fiction." —Asian Review of Books

"[The stories express that] in an era where legal and extrajudicial state expropriation underpins social transitions, anything is fair game [... and that] elsewhere the violence is mental. Four of the six tales involve imprisonment or persecution, and here the transitions extend beyond social change to pose existential questions... A thought-provoking addition to the expanding canon of White Terror-era literature in translation." —Taipei Times

Ian Rowen is Assistant Professor of Sociology, Geography and Urban Planning at Nanyang Technological University, Singapore. He earned his PhD in Geography from the University of Colorado Boulder, and was a Fulbright Fellow and postdoctoral fellow at Academia Sinica. His work on Taiwan’s culture and politics has appeared in the Journal of Asian Studies, International Journal of Transitional Justice, The New York Times, the BBC Chinese and elsewhere. His translation credits include Tibetan Environmentalists in China: The King of Dzi by Liu Jianqiang (Rowman & Littlefield, 2015), and several international award-winning Taiwanese films such as Splendid Float and Spider Lilies, directed by Zero Chou.

1. “Long, Long Ago There was an Urashima Taro” by Chu Tien-hsin (translated by Sylvia Li-chun Lin and Howard Goldblatt)

2. “The Taste of Apples” by Huang Chun-ming (translated by Howard Goldblatt)

7. “My Second Brother, the Deserter” by Wu He (translated by Terence Russell)

About the Editor and Translators