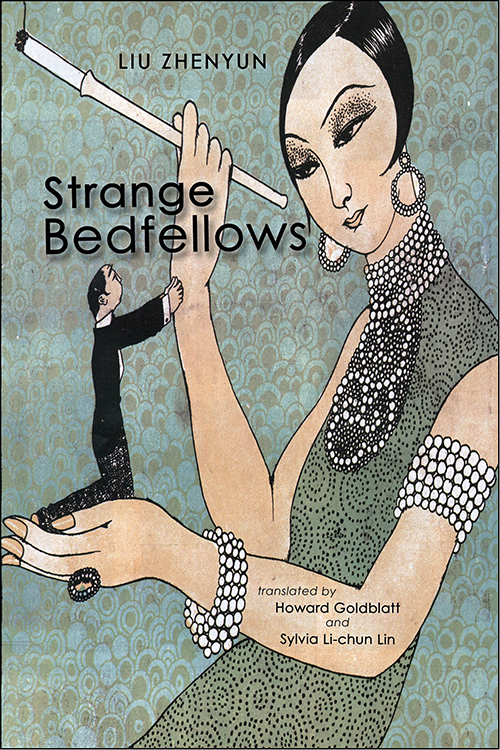 "Liu Zhenyun has once again created a jaw-dropping vision of human comedy ... Every remarkable episode in Liu’s imagination is built on weird scandals Chinese people have learned about and passed on to each other from the Internet. ... The novel is not just about China; it is a human comedy. This translated version reads wonderfully well, with Liu Zhenyun’s usual minimalist style faithfully rendered by the translators, Howard Goldblatt and Sylvia Li-chun Lin whose translation skills are universally recognized as impeccable." — Jeffrey C. Kinkley, St. John's University

Strange Bedfellows, a novel by Liu Zhenyun, China’s most renowned writer of satire, and translated by Howard Goldblatt and Sylvia Lin, is a farcical tale of sibling devotion, sexual exploitation, and official corruption, all played out more or less in bed. Though a critique of new mercenary values, scam artists, and the common folks’ vulnerability to scam artists, the novel is also an oblique compliment to the resourcefulness of these folks in a changing China.

The strange bedfellows from various parts of China include Niu Xiaoli, a country girl who borrows money from a hometown loan shark to find a new wife for her brother, whose first wife ran off with another man. When the second wife runs off with the money for the arrangement, Xiaoli goes on a search for her, only to end up prey to a high-class madam, who teaches her to become a "fake-virgin" prostitute. Xiaoli begins a life of fleecing the wealthy and powerful.

One of Xiaoli's clients is Li Anbang, the governor of a certain province, who faces arrest and possible execution for bribe-taking. A practitioner of black magic recommends that Li sleeps with a virgin to solve his problems. And thereon the twists and turns continue.

Liu’s trenchant criticism and fast-paced, humorous narrative is a delight to read. The irony that those exploiting the people end up being exploited themselves will not be lost on readers.

"Liu Zhenyun has once again created a jaw-dropping vision of human comedy. It is a story of well-intentioned people betrayed by folks with more complicated motives, of homegrown ingenuity striking back and overcoming deviousness not as sophisticated as it needs to be, and of trust in routine that is routinely undone by fate. The context is a contemporary world in which everything has its price, at least after some bargaining. Every remarkable episode in Liu’s imagination is built on weird scandals Chinese people have learned about and passed on to each other from the Internet. What I see is Liu Zhenyun’s creation of a zany and absurd logic about how one thing always leads to another and how no coincidence in life need remain a coincidence, due to the potential interconnectedness of us all, even if there were no Internet. The novel is not just about China; it is a human comedy. This translated version reads wonderfully well, with Liu Zhenyun’s usual minimalist style faithfully rendered by the translators, Howard Goldblatt and Sylvia Li-chun Lin, whose translation skills are universally recognized as impeccable." —Jeffrey C. Kinkley, St. John's University

"Howard Goldblatt and Sylvia Li-chun Lin’s translation of an innovative work of contemporary Chinese fiction by one of China’s most well-known contemporary novelists, Liu Zhenyun, follows an unorthodox narrative structure undergirded by a uniquely undidactic form of social satire. While some works of social commentary can leave readers with a proscribed sense of right and wrong, Liu Zhenyun does not attempt to redeem or correct the societal tribulations that plague the lives of his characters, but instead he draws readers into the implications of history as it unfolds. His work interrogates society’s pervasive voyeur culture and implicates each individual in its perpetuation. This is a great novel, difficult at times as the topic is a difficult one to read about, but it is clearly an important work that is extremely relevant and contemporary" —Jonathan Stalling, The University of Oklahoma

Liu Zhenyun is one of China’s best-known authors and screenwriters. By the mid-1980s, Liu began publishing short stories and novellas, many of which are now classics of contemporary literature, including Tofu; College; Office; Officials; Recruits; and Remembering 1942. Later novels, such as Cellphone; The Cook, the Crook, and the Real Estate Tycoon; Nonsense Talk; Someone To Talk To; I Did Not Kill My Husband; and Strange Bedfellows have become critically acclaimed prize-winners as well as best-sellers among readers. His numerous awards include China’s highest literary honor, the Mao Dun Literature Prize (2011), and France’s Knight of the Order of Arts and Letters (2018). His works have been translated into a number of languages including English, French, German, Italian, Spanish, Portuguese, Swedish, Dutch, Russian, Czech, Hungarian, Romanian, Serbian, Hebrew, Arabic, Turkish, Japanese, Korean, Vietnamese, and Thai. To date, over 15 million copies of Liu’s works have been sold in China, and more of his fiction has been adapted for the screen than that of any other major Chinese author.

Howard Goldblatt is Emeritus Professor of East Asian Languages at the University of Colorado, subsequently Research Professor at the University of Notre Dame. A Guggenheim Fellow and founding editor of the journal Modern Chinese Literature, he has received honorary degrees from Hong Kong and British universities. Author or editor of more than a dozen books, in Chinese and English, he is the translator of more than fifty Chinese-language books, including ten by the 2012 Nobel Laureate Mo Yan, and two winners of the Asian Booker Prize. He has co-translated nearly two dozen works with Sylvia Li-chun Lin, one the winner of the Asian Booker, another recipient of the Translation of the Year Award from the American Literary Translators Association. One of the most recent is A Son of Taiwan. He has also published a collection of flash fiction entitled A Night in a Chinese Hospital.

Sylvia Li-chun Lin, a native of Tainan, Taiwan, earned a doctoral degree in Comparative Literature from the University of California at Berkeley. She was Associate Professor of Chinese at the University of Notre Dame before resigning to become a full-time translator and writer. Author of Representing Atrocity in Taiwan: The 2/28 Incident and White Terror in Fiction and Film, she is professionally and personally invested in fictional works dealing with this part of Taiwan’s past. She coedited Documenting Taiwan on Film: issues and Methods in New Documentaries and A Son of Taiwan.

Part I: Preface: A Collection of Strangers

Chapter 3: Everyone You Know

Part Two: Afterword: Everyone You Know