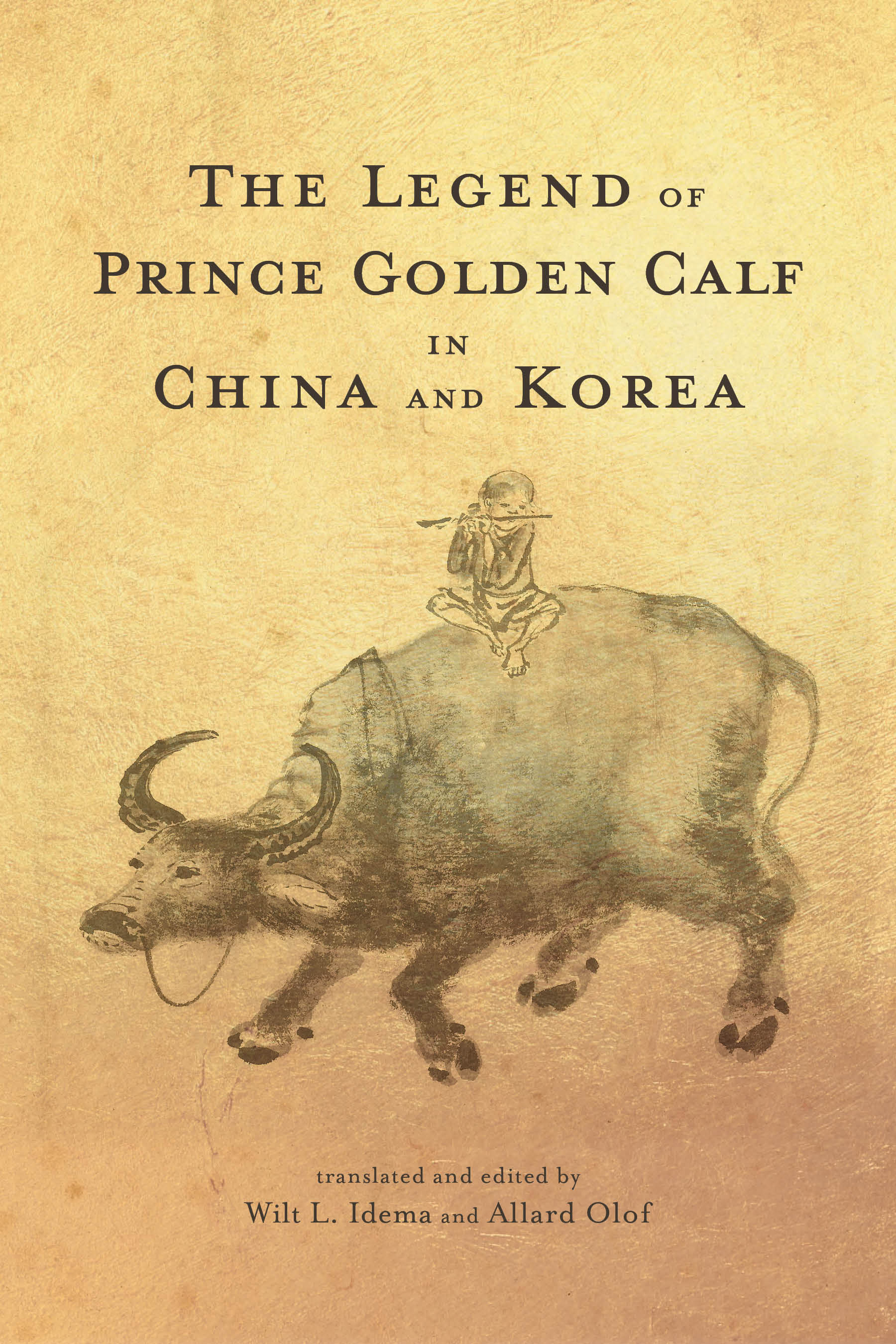 The Legend of Prince Golden Calf in China and Korea by Wilt L. Idema and Allard M. Olof

"Designed to provide selected highlights of the development of the legend of Prince Golden Calf in both China and Korea over a sustained time period, this book provides readers with insights into the particularities of adaptation and cultural interaction. Highly readable and suitable for a wide range of classes, it will also be of scholarly interest to researchers in fields such as Chinese classical and religious literature, East Asian comparative studies, Chinese folklore, and the adaptation of legends in oral and religious traditions. This book is an important addition to our knowledge of Sino-Korean cultural relations and the adaptation of Buddhist legends in the Sinosphere.” —Professor Anne McLaren, University of Melbourne

The legend of Prince Golden Calf tells the story of a prince who is turned into a calf when the jealous rivals of his mother try to kill him by feeding him to a cow. When that cow later gives birth to a calf, the king develops a special affection for the beautiful little animal. The jealous women grow suspicious, also because the calf assists his imprisoned mother in the onerous tasks that have been imposed on her. They feign an illness that can only be cured by eating the heart and liver of the calf. When the king eventually gives in to the pressure to have the calf killed, the butcher allows it to escape. In its wanderings the calf arrives in a foreign country where a local princess is selecting a groom. When her choice falls on the calf, she is chased from the palace. Eventually the calf changes into a handsome young man, so the princess can be reunited with her family, and the prince with his father and mother. This legend is best known from Korea, where it circulated in both a Chinese and a Korean version. In Korea, the tale has long been believed to have a Korean origin.

Recent research in China and Korea has revealed that the tale originated in China, as early as the late sixth century when it was written up as a jataka tale. The Chinese version that circulated in Korea most likely also was composed in China. While these early versions dropped from circulation in China, the story survived there in several versions, for instance as a precious scroll. The story also continued to circulate there, just as in Korea, as a popular folk tale. This case book presents full translations of the major versions of the legend, each with their own introductions, as well as a selection of modern folktales. Each of these adaptations offers its own take on this fascinating tale, reflecting period, genre and authorial intention. The volume is opened by a general discussion of bovine lore in China and Korea, emphasizing the affection between owner and ox as a household animal. One appendix illustrates the Korean adaptation of yet another jataka tale; another appendix argues that the legend of Prince Golden Calf belongs to the international tale-type ATU 707 and summarizes a number of versions of this type from South Asia, the Middle East and Europe.

This book would be of great interest to those studying comparative East Asian literature, Chinese and Korean popular literature, folklore, Buddhist literature, and animal literature.

“This book—the first on the historical development of the legend of the golden calf—is yet another contribution to the extraordinary list of important works that Professor Idema has analyzed and translated into English for a global readership. The legend of Prince Golden Calf will be of particular interest to those working in the field of East Asian mutual cultural interaction in the premodern era, a field of considerable current interest to scholars. It also contributes to the studies of the adaptation of Indian Buddhist stories and ideas in East Asian contexts. Designed to provide selected highlights of the development of the legend of Prince Golden Calf in both China and Korea over a sustained time period, this book provides readers with insights into the particularities of adaptation and cultural interaction. Highly readable and suitable for a wide range of classes, it will also be of scholarly interest to researchers in fields such as Chinese classical and religious literature, East Asian comparative studies, Chinese folklore, and the adaptation of legends in oral and religious traditions. This book is an important addition to our knowledge of Sino-Korean cultural relations and the adaptation of Buddhist legends in the Sinosphere.” —Professor Anne McLaren, University of Melbourne

“This book is a great contribution to the fields of East Asian religion, literature, and culture, as well as translation studies. The authors demonstrate a mastery of Chinese, Sino-Korean, and Korean, as well as an extensive knowledge of niu (ox) literature and related tales. In addition to translations of the tale of Prince Golden Calf, this book provides a broad survey of the tale’s enduring popularity and continual evolution. The additional research included in this book, such as the discussion of the trope of a cat taking the place of an infant, is fascinating. This book thus contributes to scholarship in folklore studies and the study of animal representations in literature. In addition, it deepens our understanding of the expansive transmission and evolution of a Buddhist tale in cross- and intercultural contexts, as well as the timeless themes of filial piety and the consequences of good and evil. It also invites intertextual comparisons with other folk and religious tales and with popular fictional narratives. This book will appeal to both scholars and general readers who are interested in intriguing literary motifs, including the interplay between humanity and animality (marriage between animal and human), shape shifting between animals and humans, self-cultivation, and religious syncretism. The annotations and appendices will be a helpful guide as readers make their way through the distinct literary worlds these tales reveal. This book's transcultural and trans-regional approach lays the foundation for an innovative and inclusive perspective on the development of premodern East Asian literature and culture.” —Professor Sookja Cho, Arizona State University

"With an impressive command of the existing literature, the introductions to the work and to each chapter provide essential context that is helpful for both researchers and students. In addition to being the first book to engage the legend of Prince Golden Calf in English, it illustrates the migration of this tale across time in China and Korea and the story’s ties to Buddhism. The translations are engaging, making this work accessible to undergraduates and general readers. There is nothing comparable available. This book is a valuable resource for undergraduate teaching, for studies of cross-cultural transmission, and for religious studies.” —Professor Margaret Wan, University of Utah

“This book has several strengths. It not only does an excellent job of tracing the history of different versions of the legend of Prince Golden Calf, but also, as it does so, highlights important aspects of Chinese culture as manifested and interpreted in China and Korea. The introduction to bovines in China does a wonderful job of highlighting the various cultural connotations of cows and how they hold a central place not only in Chinese agriculture but also in terms of China’s ethnic composition (e.g., the mention of how butchers during certain historical periods tended to be Muslim), religious symbolism ( e.g., Buddhist stories of rebirth as a cow), landscape names, and other famous Chinese stories involving cows (e.g., the Weaving Maiden and Oxherd, Laozi riding a cow). The final appendices further position the story in a broader global framework. Selections of this book could be used in college courses introducing traditional Chinese culture, Chinese fairy tales and legends, as well as courses on East Asian oral traditions. There is something in this book both for scholars and more general audiences.”—Professor Levi S. Gibbs, Dartmouth College

Wilt L. Idema is Professor Emeritus of Chinese Literature at Harvard University. A recipient of the prestigious Special Book Award of China, Dr. Idema’s many publications include "The Immortal Maiden Equal to Heaven" and Other Precious Scrolls from Western Gansu and Insects in Chinese Literature: A Study and Anthology.

Allard M. Olof is a retired librarian and researcher of Korean Language and Culture at the Center for Japanese and Korean Studies at Leiden University. Prior to this appointment, he taught Dutch at Hanguk University of Foreign Studies in Seoul. He holds a BA in Japanese and an MA in Korean studies from Leiden University. His publications include The Worinch’on’gangjigok: Song of the Moon Reflected on a Thousand Rivers.

Chapter 1. Bovines in China and Korea

Chapter 2. The Sutra of the Golden Calf

Chapter 3. The Tale with Poems of the Seventh Stage

Chapter 4. The Story of Golden Calf

Chapter 5. The Precious Scroll of the Golden Calf

Chapter 6. Folktales of “The Calf Takes a Wife” (and Their Relation to “The Crown-Prince Replaced by a Cat”)