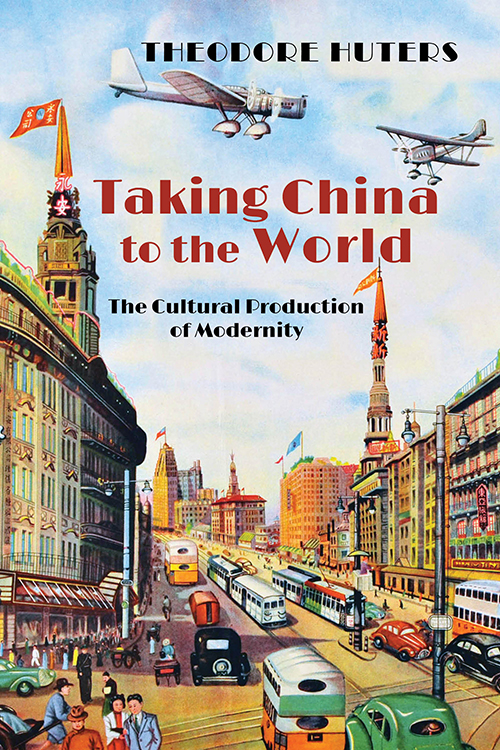 Taking China to the World: The Cultural Production of Modernity by Theodore Huters

“Investigating the elusive discourse of modernity in China, Theodore Huters brings his formidable skills to bear in a new and thought-provoking way. This project analyzes changes in language use, literary development, translation, and publication, brilliantly arguing that during some twenty years from 1898 to 1920, cultural sensibility pivoted from the openness of the previous jindai period into a quest for the certainty that marked the May Fourth era. Huters’s book is a must-read for anyone hoping to grasp the complex dynamics of the modern in early twentieth-century China.” —Wendy Larson, University of Oregon

This book is in the Cambria Sinophone World Series, headed by Professor Victor H. Mair (University of Pennsylvania).

Modernity, modernization, modernism, and the modern have all been key, interrelated terms in post-traditional China. For all their ubiquity, however, in previous studies of Chinese culture and society there has been insufficient clarity as to what the precise meanings each term has encompassed from the period beginning in 1895, the year of China’s catastrophic defeat by Japan. The importance of these terms is underlined by their implication in China’s positioning in the world over the course of the past century and a half, as well as the path China will follow in the future.

Looking into a set of concepts and practices that have been instrumental in China’s road to modernity, namely, the definition of the modern itself, a new notion of literature, linguistic reform, translation, popular culture, and the transformation of the publishing world, Taking China to the World explores the various ways in which activity in the cultural sphere shaped Chinese perceptions of both how its historical course might evolve and how all-compassing change needed to be managed.

Most studies of China’s modern transformation have implicitly based themselves on the inevitability of a process of cultural, social, and institutional rationalization, more often than not based on Western models, without grappling with the full extent of the struggles to reconcile needed changes with a grand tradition, which, for all the condemnation aimed at it after 1895, still held a powerful appeal for most of those who seriously considered the full extent of the interactions between new and old. That an idea of a monolithic new seemed to take hold of many members of the Chinese elite after the period circa 1920 does not rule out the subtle hold that key portions of the grand tradition have had over modern China. No other book offers this kind of analysis of both the historical origins and contemporary consequences of the agonizing choices made by actors in the cultural sphere who occupied core positions in the life of the Chinese nation.

Taking China to the World: The Cultural Production of Modernity is a valuable resource for academic researchers, students, and general readers interested in all subfields of Chinese studies, particularly for those engaged in charting the transformation of Chinese culture and society over the last 150 years and considering what those transformations might hold in store for the future.

“Investigating the elusive discourse of modernity in China, Theodore Huters brings his formidable skills to bear in a new and thought-provoking way. This project analyzes changes in language use, literary development, translation, and publication, brilliantly arguing that during some twenty years from 1898 to 1920, cultural sensibility pivoted from the openness of the previous jindai period into a quest for the certainty that marked the May Fourth era. Huters’s book is a must-read for anyone hoping to grasp the complex dynamics of the modern in early twentieth-century China.” —Wendy Larson, University of Oregon

“Taking China to the World gets to the heart of China’s experience of modernity. It provides fine insights not only on how radical changes happened in the textbooks and at the press but also on the many other possibilities that were foreclosed. Still more importantly, Huters traces the shifting key concepts of ‘modern,’ ‘literature,’ and ‘vernacular’ and in so doing, locates the very heartbeats and heartaches of the Chinese cultural transformation in the early twentieth century. This is history writing at its best, illuminating the past as well as the present.” —Hu Ying, University of California, Irvine

"Harnessing his formidable erudition, which includes a solid grasp of Chinese-language scholarship, Theodore Huters highlights the forgotten diversity of Chinese literary and cultural thought at the turn of the twentieth century. In accentuating modes of open inquiry that were foreclosed, Taking China to the World reevaluates the constitution of China's cultural vanguard and uncovers the finer vicissitudes of modern Chinese intellectual history. A compelling account that is an essential read in a time when China is searching for its new global position."—Chan Cheow Thia, National University of Singapore

"This study masterfully revisits intellectual giants of the late Qing and early Republican periods (such as Yan Fu, Lu Xun, Wu Jianren, Liang Qichao, and others) to interrogate the concept of modernity in China from the perspective of new literature, the vernacular language, translation practices, and even the institutional role of Shanghai’s Commercial Press. It shows that the eras were characterized by a vibrant exploration about what it meant to be modern, which lasted until the May Fourth pursuit of iconoclastic narratives of certitude that eclipsed the earlier tolerance for spontaneity and contention." —Eugenia Lean, Columbia University

Theodore Huters is Professor Emeritus of Chinese at UCLA and editor of the translation journal Renditions, the leading international journal of Chinese literature in English translation. He holds a PhD from Stanford University. Professor Huters’s publications include Qian Zhongshu, Bringing the World Home: Appropriating the West in Late Qing and Early Republican China, as well as many articles on modern and late traditional Chinese culture, and numerous translations of the work of important contemporary Chinese intellectuals.

Introduction: The Demands of Modernity in Early Twentieth-Century China

Chapter 1. The Obscure Face of Modernity in Early 20th-Century Chinese Literature: The Discourse of the Modern

Chapter 2. Wenxue and New Practices of Writing in Post-1840 China

Chapter 4. "A Whole Month of Hesitation": Further Thoughts on Yan Fu and His Translations

Chapter 6.The Advent of the Modern as Business Venture: The Case of the Commercial Press